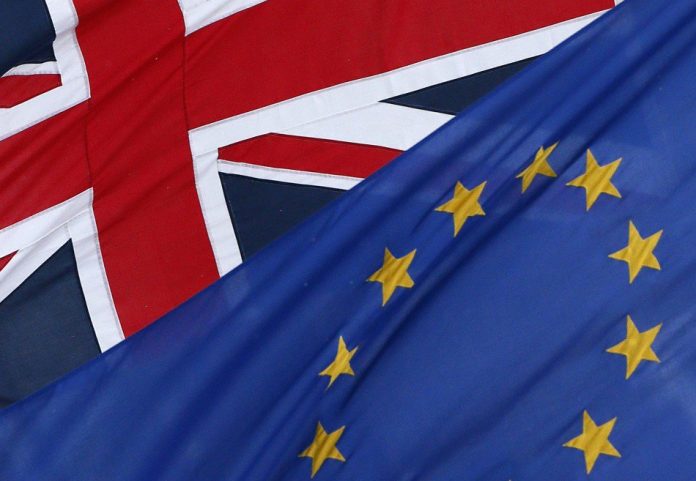 The impasse over the Irish border between the north and south has been receiving a lot of coverage in the media and this is portrayed as a new episode in the Irish Question. It is nothing of the sort. It is the British Question. And there are no answers forthcoming. Vague references to creative solutions are meaningless. No doubt civil servants have been tasked with squaring this particular circle, but they are struggling with a mathematical problem that won’t provide the answers needed.

Monday brought news of ‘alignment’ and a ‘solution’ to open up progress on Brexit talks – but not quite. May came away bolstered by Juncker’s plaudits on what a hard and determined negotiator she was. More to do with strengthening May’s position as she was in reality crushed between her hard Brexiteers and her inflexible friend Arlene Foster with her No Surrender brigade.

The Irish Government are very good at making their case and there is a logical solution – Northern Ireland remains in the Single Market and Customs Union. Better still if the UK does too, because then DUP opposition to an Irish Sea border collapses. Simples. But the May government and Arlene Foster don’t do simple. Brexit is an extraordinarily complex process. So what do the Brits do? Make it even more of a complex mess.

Does alignment mean N Ireland remains in the Single Market and Customs Union? Do they remain EU citizens when our citizenship, this side of the Irish Sea is taken away? What happens with free movement of people? Can EU citizens in Ireland freely move to N Ireland without hindrance? Is N Ireland in or out – or just a no man’s land in perpetuity?

Alignment has more questions than answers. The EU will have an external border when the UK leaves and cannot avoid that reality. Does alignment suggest an Irish single market that crosses an external EU border? If that is not the case, a real border will remain and will inevitably be subject to some controls.

The Brexiteers wanted to get back control of their borders. It may be open to question just how much Brexiteers in England think N Ireland matters and whether they really care if N Ireland stays part of the UK. Either you have control of all your borders or you do not because a 500 mile ‘alignment’ doesn’t seem to accord with Leaver demands.

The British Question is the British Problem. Following the Napoleonic wars, won by Britain and seldom mentioned allies, Britain was a major power for the following two centuries. The world was painted pink. The sun would never set on the Empire. But it did. A century has passed of steady decline, now verging on eclipse. Britain still lives in a world that no longer exists.

It is an illusion the DUPers have hung onto when the more informed in the UK – Scotland, Wales and London in particular – have understood that Britain has not the clout it had of yore. Gunboats are no longer an option.

Ireland today works on integrated political and administrative solutions with the free movement of people, goods and capital over a 500 mile border.

For the majority of people this side of the water, Northern Ireland is a different place. The political makeup is completely different to any other part of the UK. Indeed also different to the Irish republic but they have made cooperation under the Good Friday Agreement work to the advantage of north and south.

Those arguing that there will be no hard border with continuing free trade flows across the Irish border and no sea border for entry to the UK mainland or Ireland are delusionists suffering from the belief that such a paradox can be magicked away.

It is a stunning parallel to the impossible trinity, a concept in international economics, that decrees it is impossible to have a fixed exchange rate, free capital movement and an independent monetary policy. Two of these can work but not all three.

One way for the magic DUP solution to work is for Ireland to leave the EU as well. Some have proposed that as a solution but the Irish are not going to give away the advantages they have gained as EU members as a sovereign independent state. There remains a joint benefit from continuing trade across the Irish Sea. The Republic’s dependence on the link has dropped from around 60% of Irish exports going to the UK historically to 13% today.

Westminster’s solution to the problem is to give N. Ireland a unique status within the UK.  An odd solution when direct rule remains the only likelihood for the foreseeable future. It would demand an EU Border at entry points in Ireland and mainland Britain. The DUP’s response is to throw spanners in all directions when belated progress on EU negotiations seemed close to possible.

DUPers and Brexiteers say all is solved with free trade deals. Britain does not have the capacity or clout to negotiate good free trade deals. If obtainable, it would take decades to replace existing trade relations without necessarily correcting the UK’s long-term trade imbalance.

Much as Leo Varadaker, the Irish Taoiseach, may wish a solution for a free flowing Ireland border he is also concerned about the impact on Irish exports to Britain and especially for the links between financial centres on both sides of the Irish Sea. Britain has an even stronger interest in a solution. UK exports to Ireland are larger than imports from Ireland. Ireland is one of the few countries the UK has an export surplus with.

The UK media has consistently covered Irish concerns and ignored the damage to the UK economy of losing a positive trading relationship. Ireland is a very different country now compared to the historical relationship when Ireland fed mainland England, even during the penury of the potato famines. A dominant agricultural economy has been transformed into one where the major exports are consumer goods, chemicals and pharmaceutical products.

Ireland’s financial sector continues to grow and gain from Brexit. Trade can flow freely if the UK stays in the Single Market and Customs Union. Any deal over services is a bit more tricky. Any trade deal with a country outside the EU will not have the same benefits as full EU membership. May’s ministers still have not got their inflated heads around that yet.

Just because the UK economy is bigger than Ireland’s doesn’t mean it is in a healthier state. UK exports are worth $405bn and Imports come to a massive $625bn. UK trade totals $1030bn and 61% is accounted for by imports. Imports are 54% greater than the value of exports, or $220bn, which must be made up on the current account by inward investment, sales of formerly UK owned businesses, or property sales to high net worth individuals seeking to hide wealth from their own governments. 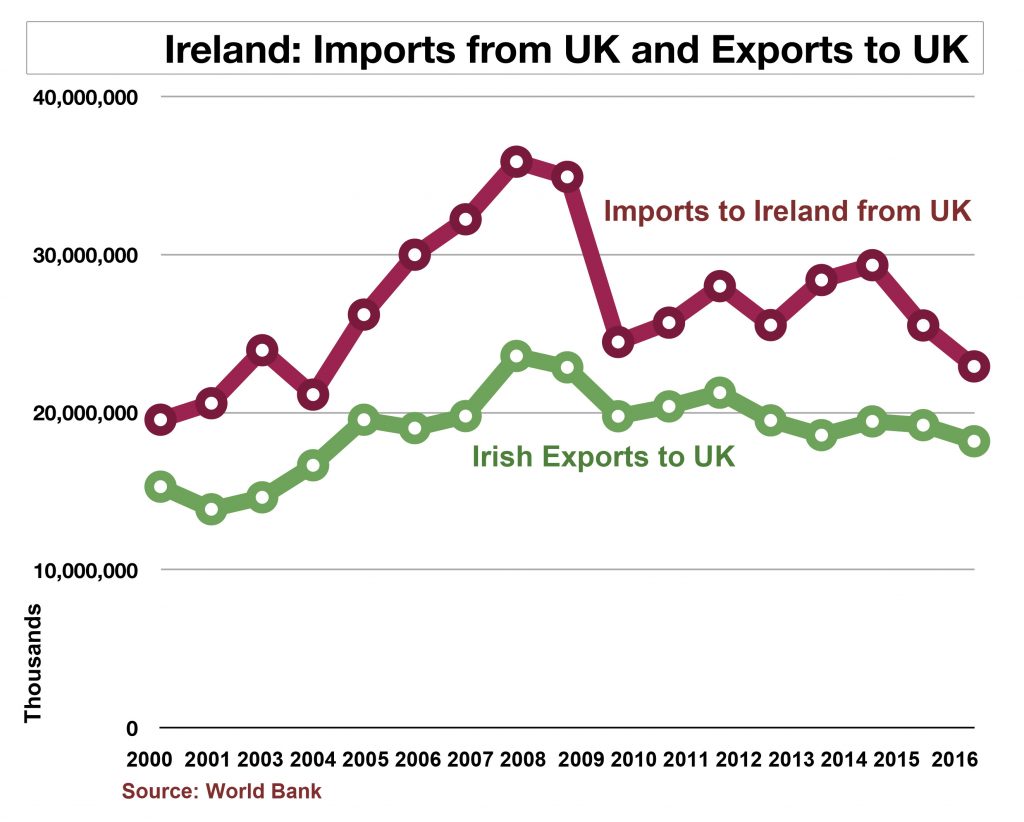 Smaller economies are much more nimble in reacting to changes. Ireland took a big hit also during the financial crash but has recovered with impressive growth, made easier due to being a much more diversified economy now compared to the time it joined the EU.

Calls for all of the UK to stay in the Single market and Customs Union are coming from all quarters. Nicola Sturgeon and Michael Russell have been pushing that for 12 months. Finally Ruth Davidson has added her twopence worth to embarrass May, and Keir Stammer has urged May not to take the Single Market and Customs Union off the table, representing the faintest glimmer that the Labour party might have an alternative plan for Brexit and are shifting position from support of the Tory shambles.

Only the SNP have had a consistent and clear view of the least disruptive options for a UK Brexit.  Rees of Yore and his wee band of Moggies came out to support the DUP from the hard right backbenches. The DUP demand not to be different from the UK, the biggest joke of 2017, is solved by all the nations of the UK remaining in the Single Market and Customs Union. I suspect the Moggies didn’t think that through.

Watch this space – confused, bemused, outraged – you will be. The tragedy of May and the dangerous impact of Brexit is a story that will outlive the unstable PM.

Finally I have some well-meant advice for our embattled Prime Minister, humiliated by a rapid retreat from Brussels on Monday at the hands of Arlene Foster.

Go with prevailing business support for a positive arrangement in the Single Market and Customs Union. That has support from all the political parties, meets the DUP demand and probably has majority support within your own party. To be strong, at last, Mrs May you have to show you are willing to break your own party to reach a result in the best interests of the UK and its constituent parts. Strong leaders play hardball in a crisis.

So Mrs May, after you have talked to God, talk to the country and prepare for your own night of the long knives, or face it.

What is the point of Labour?