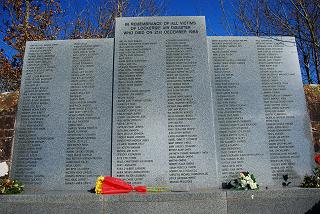 “A SPECTACULAR MISCARRIAGE OF JUSTICE”*

Their names for evermore etched in stone.
Abdelbaset Al-Megrahi and Scottish Justice await in the wings to join them.

It is now a full year since the man convicted of the Lockerbie bombing, Abdelbaset Ali Mohmed Al-Megrahi, stepped out of HM Prison Greenock a free man to return home to Libya and his family via the provision of compassionate release under due process of Scots Law.

A decision taken in consideration of the prisoner’s terminal medical condition.

From that moment until today, the protests at the decision taken by the Scottish Cabinet Secretary for Justice, Mr Kenny MacAskill, have ranged from President Obama’s limp pronouncement of outrage to US senators summoning Mr MacAskill and First Minister Alex Salmond to Washington to account for their actions.

What if, however, Mr Al-Megrahi is in fact innocent of the crime he was convicted of on the basis of the evidence placed before their Lordships at Kamp van Zeist? Surely then arguments over the circumstances of his release, engaging though they may be in their own right, would pale into insignificance.

It was precisely that question which moved the Scottish Criminal Cases Review Commission (SCCRC) to refer the case back to the Court of Appeal on no fewer than six grounds for appeal. Six grounds which included that on crucial factual matters the trial court reached conclusions that no reasonable court could have reached on the evidence heard.

These centre on the testimony of the prosecution’s star witness, Mr Tony Gauci, at Zeist, where judges did not know and so could not take into account the issue of payments of $2,000,000 and $1,000,000 to himself and his brother respectively.

Unfortunately, it seems that we are now to be denied the opportunity to hear an answer to “What if?”

The Scottish judiciary chose to set the appeal process to last over an unconscionably lengthy period; the 90 day window for Libya’s application for release under the Prisoner Transfer Agreement (PTA), to which Holyrood took so much umbrage, signed by UK Prime Minister Tony Blair and Colonel Gaddafi, expired; Mr MacAskill had an unprecedented private discussion with Mr Al-Megrahi at Greenock; the appeal was bizarrely dropped and, days later, Mr Al-Megrahi was repatriated.

Bizarrely, because whereas, under the PTA no prisoner can be freed whilst any legal process is ongoing, under the terms of compassionate release no such restriction applies.

With the dropping of the appeal, the last best hope of resolving the issues and addressing the doubts over the safety of this conviction took to the skies with Mr Al-Megrahi.

Ever since that moment attempts have been made to engage the General Assembly of the United Nations Organisation, the Government of Malta, the Senate of the United States of America and the Scottish Government in an effort to open a full, open and public inquiry encompassing all aspects of the Lockerbie case, from the events of 1988 through to the present day, in the hope of getting to the bottom of this increasingly murky pool ……. as yet to no avail.

When it came to granting compassionate release to Mr Al-Megrahi, the Scottish Government was adamant that the matter fell under Scottish jurisdiction and would brook no interference in the nation’s affairs through Westminster’s PTA arrangements. When it comes to the establishment of an inquiry, although Mr Salmond has expressed some muted enthusiasm for the idea, why does Edinburgh appear so keen to abrogate its responsibility and pass the buck to London? One cannot have one’s cake and eat it.

The excuse frequently offered is that a Scottish inquiry would not possess the requisite power of subpoena when it comes to requiring evidence to be produced before it which does not lie under Scottish jurisdiction. This same argument not only applies to Westminster but to the General Assembly of the United Nations Organisation also.

In fact, the only body with the powers that Mr Salmond is looking for is the Security Council of the UN, and this body has ceased to deal with any and all matters relating to the Lockerbie incident (see Security Council binding resolution of 12th September 2003, which states, in operative para 3, that it “hereby removes this item from the list of matters of which the Council is seized”).

In other words, given this, and the fact that the General Assembly appears to be reluctant to take the bull by the horns, it is down to individual nation states. The nettle will assuredly sting but must be grasped.

The Scottish Government should not be allowed to shirk its duties and responsibilities to the bereaved and its electorate by expecting other, foreign, authorities to pick up the gauntlet.

It is for these reasons that we formally request that the Scottish Government establish an inquiry post haste into the entire Lockerbie/Zeist case and that such a body should have the remit and powers to investigate the following:

An inquiry will no doubt bring with it embarrassment for some as it calls into question their reputations.

However, if justice is regarded as a convenient device with which to achieve expedient results in defence of human frailties, thus obscuring the truth, and a placebo with which to placate the bereaved, we are all in a very sorry state indeed.

A step of this nature will go some considerable way towards restoring faith in Scotland’s once justifiably envied system of criminal justice, which is now internationally derided as a result of our continuing failure to tackle the problems created and sustained by the Lockerbie affair. The bereaved rightfully deserved justice from Zeist in the same way that Mr Al-Megrahi rightfully expected it.

We fully and deeply sympathise with those bereaved friends and families who believe the conviction to be safe. Clearly they, more than any other group, would be utterly devastated if it were to be established that the conviction was unsafe. Nevertheless, if Mr Al-Megrahi’s appeal is not to be heard, the only option remaining is an inquiry.

It is our belief that all of the bereaved, regardless of their positions, have been done a disservice under Scots Law at Zeist.

High above courthouses worldwide stands a statue of Justice holding scales in her left hand and in her right a sword. She is a symbol of the glue that binds together the very fabric of society. We depend on justice and its instrument, the law, to provide cohesion in our relationships. If justice loses its lustre or becomes tarnished, we degenerate into a world of cynicism and chaos. Surely it is a sign of a great society if that society can reflect on its deeds and not be afraid to revisit perceived mistakes to seek redress and right wrongs where they have been committed.

To have the resolve to take such action is not an admission of weakness but a sign of supreme strength. The time to act is now. The once good name of Scottish justice can be redeemed. It must not be seen to die with Mr Al-Megrahi and finally sink into a mire of disrepute.  We do not seek retribution, we seek the truth in the name of justice itself.

The ghosts of Lockerbie must be laid to rest.

Mr John Ashton (Co-author of ‘Cover-up of Convenience: The Hidden Scandal of Lockerbie’).

Mrs Jean Berkley (Mother of Alistair Berkley, who was killed on flight 103).

Professor Robert Black QC (Commonly referred to as the architect of the Kamp van Zeist Trial).

Mr Ian Ferguson (Co-author of ‘Cover-up of Convenience: The Hidden Scandal of Lockerbie’).

Mr Ian Hislop (Editor of Private Eye: one of the UK’s most highly regarded journals of political comment).

Father Pat Keegans (Lockerbie Parish Priest at the time of the Pan Am 103 incident).

Mr Charles Norrie (Brother of Tony Norrie, who died aboard UT-772 over Niger on 19th September 1989).

Mr Steven Raeburn (Editor of ‘The Firm’, one of Scotland’s foremost legal journals).

Mr James Robertson (Writer and author of the recently published ‘And the Land Lay Still’).

Sir Teddy Taylor (Former Shadow Secretary of State for Scotland and Member of Parliament from 1964 to 2005).