Watching Alex Salmond’s performance on BBC1’s Question Time on Thursday night must have been an eye-opener for a lot of viewers in England.

I’m not a fan of Question Time.  It may be the most popular weekly political programme on the box but the format is stale, the audience is vetted, the questions are predictable (and therefore participants have adequate time for their researchers to prepare answers), and the guests are usually politically indistinguishable from one another.  It makes the show incredibly tedious.

In this respect it is quite an accurate reflection of English politics.  Three jaded political parties form a polite scrum near the centre of the political spectrum.  Even when it comes to the most debauched neoliberal excesses of the Cameron-Clegg regime’s public spending cuts all Labour can do in opposition is shrug its shoulders and offer much the same but “not so quick”.

Question Time’s producers know fine well they’re trying to breathe life into a corpse.  If all their guests were routinely plucked from the higher strata of the three big Westminster parties viewers would simply turn on, tune out, and drop off into a coma.

Their solution is often to send in the clowns or haul in the freaks from Jerry Springer-land.  The BNP’s Nick Griffin or former Sun editor Kelvin Mackenzie fit the bill nicely.  The Alf Garnett Tendency ratchets up the controversy quotient, and of course, the viewing figures, but serious politics it is not.

Since the Labour Party drifted over into the congested centre it is a rarity that populist views from the social democratic left, or indeed the socialist left, are given the time of day on the BBC.  This is strange since Question Time producers freely admit that viewing figures spike upwards whenever Tony Benn appears on the programme.  Viewers warm to Benn in a way that few leftists emulate.

Inviting Alex Salmond to appear on an edition of the show, filmed and broadcast from England, must have seemed like a good idea.  As it turned out it was a very good idea.

For the first twenty minutes or so neither the presenter nor the other guests paid much attention to Salmond.  They had English matters to deal with.  The few times he spoke were nondescript.  Then the programme lurched onto the subject of the NHS – which is near the top of the political agenda inside and outside Westminter.  Andrew Lawnsley’s health reforms – the de facto privatisation of the NHS in England by any other name – could yet pull apart the UK Coalition government.

Labour’s Peter Hain would have got away with his feeble point scoring against the government’s health reforms if Alex Salmond hadn’t been there.  Instead there was a panellist whose intervention was clinical and informed.  Salmond hammered home the point that Labour began the privatisation of the NHS in England through Foundation Hospitals and PFI/PPP.  He quoted BBC research that under the previous Labour administration the £11 billion capital investment spent on building PFI hospitals would need £66 billion repaid to private contractors in the long run.  He made the point that prescriptions were free in Scotland.  And, crucially, that the Scottish government under the SNP “were going back to founding principles of the NHS” – namely, a publicly-owned service, free for all at the point of need.

It is little wonder the studio audience roared its approval, much to the dismay of the three London parties.  Nothing could have further underscored the fact that Scotland has a left-of-centre social democratic alternative to the three parties of privatisation and profiteering.  It was a bit cheeky, but totally correct, that Salmond asked the English audience why “you’re allowing these three parties to destroy your National Health Service.”

When, inevitably, the subject of Lockerbie came up, Salmond was there, presumably, to be the sacrificial lamb over the release of al-Megrahi.  Instead the three amigos sat aghast as Salmond swatted them away like flies, reminding them forcefully that all three of their parties were up to their necks in selling arms to Gaddafi and doing dodgy deals in the desert.

Viewers in England must have been thinking a) who is this guy? and b) why haven’t we got a principled leader of a major party who is prepared to stand up for the NHS and oppose such things as privatisation and selling arms to dictators?

I’m not an SNP member nor even a down-the-line supporter (my List vote goes elsewhere) but hell, hats off when it’s deserved.  And sometimes we need to step back from our own Holyrood goldfish bowl and look at the sort of people elected to govern elsewhere.

There may be policies or ideas within the SNP government that I don’t necessarily concur with but when you watch someone like Alex Salmond debating with the best that England has to offer it puts things into perspective.  When all things are considered Scotland is one of the few corners of Europe which currently has a broadly progressive social democratic government in power.  And I reckon this was pretty obvious to the viewers in England too.  This is no small potatoes and shouldn’t be taken for granted. 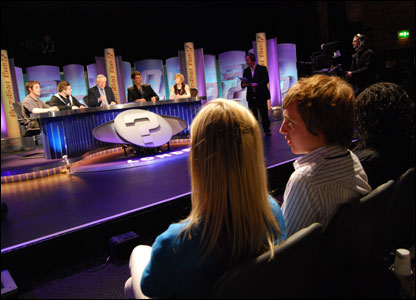 Revealed: the Question Time broadcast that must never be shown