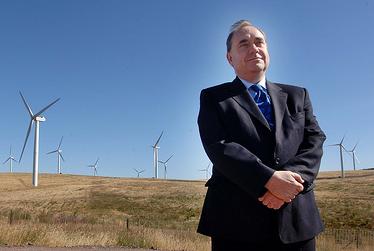 “This is a pivotal turning point in human history, on a par with the move from hunter-gathering to settled agricultural communities or the discovery of the New World in 1492….”

First Minister Alex Salmond opened the Scottish Low Carbon Investment conference in Edinburgh, where more than 450 leading figures from international finance, energy and other sectors are gathered to explore opportunities and help accelerate private investment in a global market that is forecast to grow to £4.3 trillion by 2015.

Mr Salmond also unveiled an industry-led Offshore Wind Route Map, setting out the key actions required in the coming years to fully realise the huge potential around the coast of Scotland – estimated to have a quarter of Europe’s potential offshore wind and tidal capacity and a tenth of its wave resource.

“This is more than a once-in-a-generation opportunity such as North Sea Oil and Gas was. Until now, mankind has largely been reliant on carbon based energy for fuel. Ever present was the realisation that finite resources must eventually run out. More recently, has been the realisation that our overuse of carbon and dependence on petrochemicals threatens the climate itself.

In Scotland up to 60,000 new green jobs could be created across the low carbon sector by the end of this decade – some 28,000 of them directly servicing domestic and worldwide offshore wind markets.

“The Offshore Wind Industry Group’s Route Map sets out the sector’s ambitions in Scotland and identifies clearly what actions are needed now – from reform of the UK’s outdated transmission charging regime to strengthening grid connectivity. It can galvanise us all to overcome these current challenges and ensure we deliver on the huge potential around Scotland’s coast. The Industry Group’s report also calls for the release of Scotland’s £189 million fossil fuel levy surplus. The sooner the funds are unlocked, the sooner we can use them to leverage greater levels of investment in our ports and other infrastructure.”

“Capital may be difficult to get but the renewable resources of our land and sea are scarcely touched and now opening up. And in the East a quarter of mankind is racing from poverty to prosperity at growth rates of close to or above 10 per cent annually. And they are looking for solid, secure infrastructural investment to replace the asset bubbles of the past. While we won’t find all of the financing solutions this week, we know that it has been done before with North Sea oil and gas a generation ago. And we can do it again on the same scale. Let’s get down to work and bring our Renewables Revolution closer to reality.”

“I welcome the publication of the Scottish Offshore Wind Industry Route Map. This clearly demonstrates that if the renewable industry continues to work in partnership with Scottish Government, and that Government continues to show leadership in this area, Scotland can capture all the employment and economic benefits that befit the huge renewable resources around our shores.”

The global low carbon economy was estimated to be worth £3 trillion in 2007-08 and is forecast to grow to £4.3 trillion by 2015. The two-day Scottish Low Carbon Investment conference provides a unique forum for Government, international finance, utilities and developers to engage directly, debating and identifying the risks and rewards of major capital, public/private and ‘venture’ size projects in the low carbon sector. Scotland’s First Minister, Environment Secretary, Energy Minister and senior officials will represent the Scottish Government at the conference.

An Offshore Valuation report, published in May, found that harnessing just a third of Scotland’s practical offshore wind, wave and tidal resource by 2050 would take the country’s installed offshore renewables capacity to 68 GW. Deploying just a third of the total UK resource could unlock the electricity equivalent of 1 billion barrels of oil a year (matching North Sea oil & gas production), delivering CO2 reductions of 1.1 billion tonnes by 2050.

The report estimated that delivering this output would require capital expenditure between now and 2050 estimated at £443 billion across the UK – which, if apportioned on the basis of share of practical resource, would equate to some £177 billion of capital investment in offshore sites around Scotland.