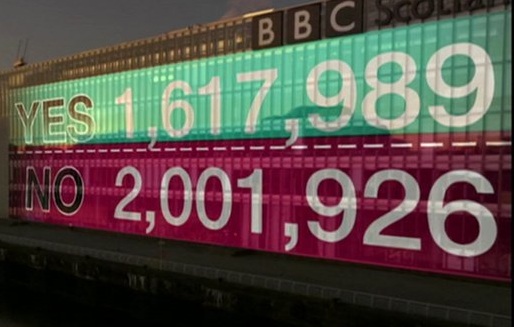 The second part of a retrospective documentary on the Scottish independence referendum and its aftermath – ALTERED STATE – has been made public, featuring the reflections of various writers and bloggers from the Yes camp.

Titled ‘Winner Take Nothing’, it begins with the increasingly desperate ‘No’ campaign arranging Her Majesty’s backing. The impact of Project Fear’s negativity, elite self-interest, media imbalance and last-minute promises finally proved too much to overcome for the Yes campaign. Interviewees consider aspects of voter behavior and results as well as flaws in the Yes argument that require attention before considering a second referendum. In a campaign that saw the unionist parties prepared to destroy themselves to win, perhaps the real winner was the newly politically aware Scottish public who are still deeply engaged in a conversation about their constitutional future, a debate that seems destined to arrive at only one conclusion.

Was the last minute reintroduction of the ‘Devo Max’ offer a clear breach of the Edinburgh Agreement and a cynical attempt to split the pro-independence vote? Did HM Treasury collude with the BBC during the illegal RBS leak of market sensitive information to damage the economic case of the Yes campaign?
Watch and make up your own mind.

Christopher Silver’s new book ‘The Case for a Scottish Media’ is due for release.

Nationalism as a natural state of mind, not an anti-this or...

Can Europe save Britain from a bitter, xenophobic Brexit conclusion?