Glasgow council officials have been accused of wasting taxpayer’s money on self promotion after colour leaflets were sent out along with council tax demands to city households.

The 28 page full colour leaflet features a signed introduction from shamed former council leader Steven Purcell who is pictured smiling.  The statement praises the performance of the Labour run council and informs the reader that this has been a “difficult economic situation”. 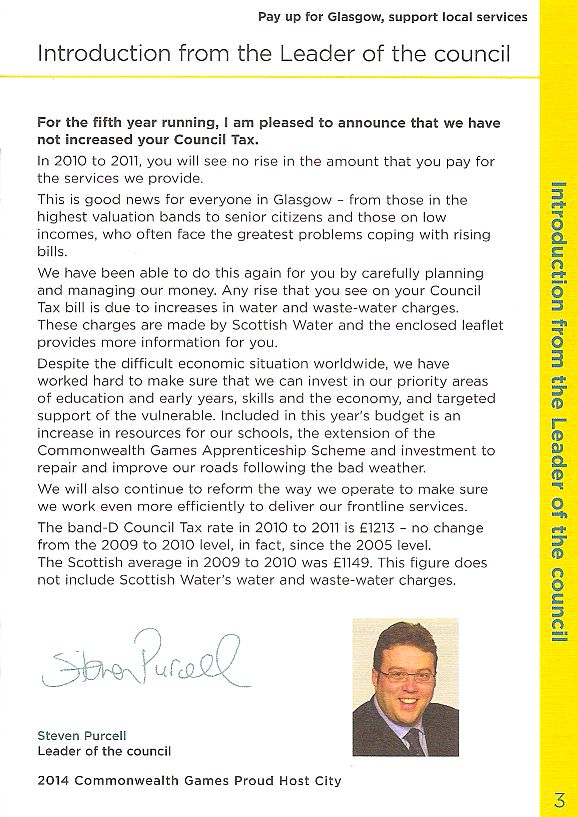 Leader of the SNP group at the council James Dornan said:

“Running a council is all about choices. Do you spend that extra money you found from your tight budget on roads, social care or schools for example?

“In Labour run Glasgow City Council the answer appears to be, spend it on self promotion.

“Thousands of pounds of your hard earned council tax are wasted in telling you just how good your Labour Councillor is.  When potholes as big as a man appear on our roads and children lack proper equipment in their schools surely it is time for them to cease their obsession with style over substance.

“The SNP Group has continually harried the Administration to cut their self promotion budget and we have had some notable success recently.  However it is clear there is still much more to do and we will continue to remind them that the reason they got elected was supposed to be to improve the lives of the residents of this great city, not to print glossy magazines to try to improve the chances of them getting re-elected. “

The picture of Mr Purcell on the leaflets will be seen as an embarrassment for Labour following the recent revelations involving the former council leader.