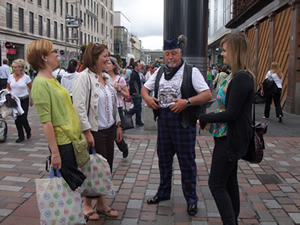 Kenneth Roy on the ultra-sensitivity of Culture and Sport Glasgow

Two years ago, an arts magazine, Variant, was abruptly withdrawn from venues owned by Culture and Sport Glasgow (CSG), the body which controls most of the museums, libraries, sports and cultural centres in the city. The magazine’s editors were informed that they had made defamatory statements against CSG’s chief executive, Bridget McConnell, and the vague threat of legal action hung over the magazine.

I should declare a small interest. When I was setting up the Institute of Contemporary Scotland in the summer of 2000, Bridget McConnell was helpful in arranging an office, rent-free for an initial period, and we were given the city chambers for an inaugural meeting and reception. Mrs McConnell was managing the council’s culture and leisure department before it was hived off to become an arm’s length organisation (as it is known) with charitable status. Our association ended long ago, but she struck me then as bright and dynamic, responsive to ideas, with a warm personal style.
That is partly why the treatment of Variant is unsettling. How could this tiny cultural mag be so damaging to the reputation of Bridget McConnell in particular, Culture and Sport Glasgow in general, that it required to be banned from such a citadel of intellectual freedom as a theatre?
It is, in truth, difficult to see anything defamatory in the statements complained of. Here is one of them:
When McConnell was promoted to Executive Director of Cultural and Leisure Services, her role grew to include sport.
Wow. That bad, huh?
In response to this outrageous allegation, the media manager of Culture and Sport Glasgow, James Doherty, who was then also president of the National Union of Journalists (no less), pointed out in a letter to Variant that Mrs McConnell’s role had previously included management of the council’s sports facilities and events.
It seems, then, that Variant got it slightly wrong – that there was a misunderstanding on its part about Bridget McConnell’s executive responsibilities. But joking apart – if an accusation of defamation can ever be a joke – this doesn’t sound actionable, it doesn’t sound like the crime of the century, it seems scarcely worthy of correction.
Yet, in his letter to Variant, Mr Doherty used the word ‘defamatory’ to describe the statement I have just quoted. If it is indeed defamatory, then we must conclude that freedom of expression in Scotland has passed away, quietly at home, without any public celebration of its distressingly short life. In the circumstances, I propose to be brave, even subversive, and quote the defamatory statement a second time. The risk of a letter from James Doherty cannot be discounted. He may even be able to claim that we have aggravated the offence by publishing the statement twice in the same short column.
When McConnell was promoted to Executive Director of Cultural and Leisure Services, her role grew to include sport.
If Mr Doherty wishes to instigate proceedings over this, our address for lawyers’ letters is 66 John Finnie Street, Kilmarnock KA1 1BS. For most of last week, John Finnie Street was blocked off after a council bin lorry somehow crashed into the offices of our neighbours, Allen and Harris estate agents. We were on the traffic news for days; a reader in faraway Lochailort spotted us on the BBC. Ye Olde John Finnie has now reopened for business and we are receiving post and such occasional visitors as we care to admit – so I imagine that a letter from the past president of the National Union of Journalists will get here sooner or later. Probably later.

It deserves to be more widely recorded as a small but revealing episode in the modern history of Glasgow, a city so confident in the face it presents to the world, yet surprisingly insecure when its skin is lightly punctured.

The singularity of Mr Doherty’s letter to Variant went, however, beyond accusations of mere defamation. It strayed boldly into territory that is often considered the prerogative of editors. Here is an extract from his letter to illustrate what I mean:
The images you chose to illustrate the piece are in no way representative of Culture and Sport Glasgow and the work it does. They would appear to have been chosen to illustrate the city of Glasgow in a negative way and thus associate Culture and Sport Glasgow with negative imagery.
You may wonder why I have raised these matters so long after the event. The story is two years old after all, and the author of the offending article no longer lives in Scotland. I know this because she is occasionally in touch with me, although I do not recall her ever mentioning the names James Doherty or Bridget McConnell. We have not corresponded in advance of this piece, but I imagine that it was not a happy time for her. To be accused of defamation is never pleasant.
I mention the story now for three reasons. First, because it received little if any attention. Second, because it deserves to be more widely recorded as a small but revealing episode in the modern history of Glasgow, a city so confident in the face it presents to the world, yet surprisingly insecure when its skin is lightly punctured. The third reason is that I have one or two concerns about Culture and Sport Glasgow myself, which I hope to share with you tomorrow. In view of the apparent sensitivity to criticism of that organisation, I intend to proceed with caution, taking extra care not to be defamatory.
Meanwhile, we have selected to illustrate today’s editorial a photograph taken by Islay McLeod close to the office of the past president of the National Union of Journalists. I hope Mr Doherty will agree that it illustrates the city of Glasgow in a suitably positive way, although it is impossible to be sure. In the appearance of the one male character in the picture, the jolly Glaswegian with the tartan outfit, there is a hint of caricature which may not be quite in tune with the required imagery.
It is a risk we must take.

his article has been reproduced with the kind permission of Kenneth Roy.

The health board would rather punish the hospice than save it

An avoidable fiasco, the very public disgrace of a major public body

An avoidable fiasco, the very public disgrace of a major public...

My ‘blind spot’ about the prisoner in D hall