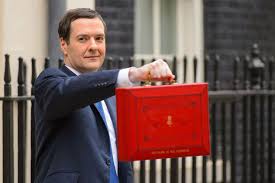 In the space of a few days the people of Britain have learned that their country is broke and facing dangerous levels of debt with little in the way of sustainable recovery to ameliorate the effects. Yet on both publications days – last week for GERS and yesterday for the Budget – a political class cheered and whooped like partying baboons rather than confront the truth.

In Scotland the local economy is some £15 billion in deficit (hurrah!) while across the UK the national economy faces of shortfall of £56 billion to add to the still-growing £1.6 trillion national debt (whoopee!).

Any crisis can be managed and overcome with the right approach but it’s the undignified charade of pretence that is most disturbing. Does any rational citizen honestly believe that the UK’s accounts should be deliberated upon in purdah, manipulated to suit political purpose and then presented like early evening television glitz? George Osborne’s Budget X Factor…

We might, as taxpaying citizens, get the point if he stood up in sombre mood and said we are in trouble. That despite his best efforts, he had failed to hit his targets for reducing the debt and also missed his objective in capping welfare spending. That it was unlikely he would hit his other target of bringing the economy into surplus in 19/20. The reasons included a global slowdown, a distressed Eurozone, lack of industrial development to drive higher productivity with the prospects for improvement poor. As a result he would do all he could to shield the weakest. After all, the top one per cent has already gained 50 per cent of all the economic improvement achieved since 2008.

Instead it’s one baying mob against another in an arena primed for war and utterly incapable of thoughtful analysis or consideration of the national interest. The consistent failure of Osborne to get it right – this is Budget Number Nine – betrays a man making it up as events unfold. Even the keystone policy – cutting spending – succeeds only at the level of diminishing the spending power of individual taxpayers because at the essential level of ‘living within our means’ the government’s borrowing goes up and up with no end in sight. The growth that was to pay for future policies is cut back in the OBR forecasts. The money simply isn’t there. The chief economist at one of those finance houses in London said: ‘The reality is that his forecast numbers rely on accounting tricks, unspecified future spending reductions and more stealth taxes and would be blown out of the water by another recession or a rebound in borrowing costs.’

If the people at the top level with the public, the problem is shared and all energies are concentrated on what we must do to rebalance the economy. Instead we all run off in different directions, cheering if we’re small businesses or wondering if we can afford the wheelchair if we’re disabled. The treatment of those with infirmities who rely on every penny in benefit for an agreeable life is both a moral disgrace for a civilised nation and an insult to the welfare state. Many of them already struggle with mental or physical difficulties, they confront prejudice, have their lives constrained by bureaucracy and rarely earn much more than the living wage. The inexorable crushing of their lives in order to fund extra for those living on unearned income is anti-British.

And where is the opposition to all this? Angry and passionate at Westminster (bravo!) but in the opinion polls not trusted as much as these inhumane Tories. I’ve been despairing lately of politics in England where neglect and indifference have allowed first Blair and now Cameron to rip up any remaining semblance of social compact. The north is already shattered beyond repair by any poncey PR spin about powerhouses. The money flows to the already bulging banks of London, financiers take over the schools and American health profiteers empty the NHS.

You don’t need an OBR forecast to see it is unlikely in the extreme that a more liberal government will be elected soon. The genuine worry must be that this rabidly right-wing, class war government has one more catastrophic miscalculation to come – an Out vote in the EU referendum.