Atlantis Resources Corporation, one of the world’s leading developers of electricity-generating tidal current turbines, unveiled the largest and most powerful tidal power turbine ever built, the AK1000, yesterday at Invergordon, Scotland.

The AK1000 is due for installation at a dedicated berth at the European Marine Energy Centre (EMEC), located in Orkney, Scotland later this summer. 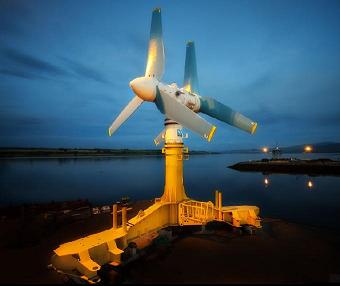 Atlantis Resources Corporation (Atlantis), one of the world’s leading developers of electricity-generating tidal current turbines, unveiled the largest and most powerful tidal power turbine ever built, the AK1000, yesterday at Invergordon, Scotland.

The AK1000 is due for installation at a dedicated berth at the European Marine Energy Centre (EMEC), located in Orkney, Scotland later this summer.

CEO of Atlantis, Timothy Cornelius said:
“It is one of the harshest environments on the planet.
“In order to get a robust turbine we have had to make what we call ultimately the dumbest, simple but most robust turbine you could possibly put in such a harsh environment.”

Dignitaries, utilities and technology partners from around the world attended the unveiling of the flagship turbine at the Isleburn Engineering facility, taking the only opportunity to view the turbine before it is installed on the seabed and connected to the grid at EMEC.

Despatching 1MW of predictable power at a water velocity of 2.65m/s, the AK1000 is capable of generating enough electricity for over 1000 homes. It is designed for harsh weather and rough, open ocean environments such as those found off the Scottish coast.

The turbine incorporates cutting edge technology from suppliers across the globe, has an 18 meter rotor diameter, weighs 130 tonnes and stands at a height of 22.5 meters. The giant turbine is expected to be environmentally benign due to a low rotation speed whilst in operation and will deliver predictable, sustainable power to the local Orkney grid.

Mr Cornelius explained: “The turbines turn at six to eight revolutions per minute so are incredibly slow turning and will have zero impact on the surrounding environment.”

Mr Cornelius, said:
“The unveiling and installation of the AK1000 is an important milestone, not only for Atlantis, but for the marine power industry in the United Kingdom. It represents the culmination of 10 years of hard work, dedication and belief from all our partners, staff, directors and shareholders.

The AK1000 is capable of unlocking the economic potential of the marine energy industry in Scotland and will greatly boost Scotland’s renewable generation capacity in the years to come.”

Mr Cornelius said that the focus of the marine industry at the moment was making Scotland’s Pentland Firth a huge success in terms of generating electricity from renewable energy devices.

“Today is not just about our technology, it is about the emergence of tidal power as a viable asset class that will require the development of local supply chains employing local people to deliver sustainable energy to the local grid. The AK100 takes the industry one step closer to commercial scale tidal power projects.”

The AK1000 nacelle was fabricated by Soil Marine Dynamics in Newcastle in England and the gravity base structure and system assembly was completed by Isleburn Engineering, a member of the Aberdeen based Global Energy Group.  Steel for the turbine came from Corus’ Scunthorpe facility.

“The AK1000 development program has injected over £5M to date into UK Plc’s renewable energy sector and has provided employment across a broad range of sectors including design, engineering, fabrication and project management. We are at the start of a new industrial boom, akin to the development of the North Sea oil & gas fields. If we receive the same support from all levels of government that the oil & gas industry received to make the North Sea the success that it is, then the future is very bright for marine power and even brighter for Scotland”