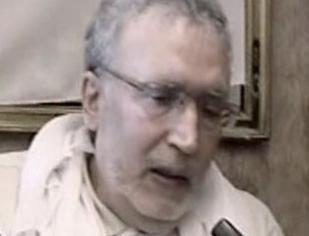 A campaign group that includes UK relatives of the victims of Pan Am 103 have launched a petition with the Scottish Parliament calling for an independent inquiry into the conviction of the man known as ‘The Lockerbie Bomber’ – Abdelbaset Al Megrahi.

The group, Justice For Megrahi (JFM), believe that a miscarriage of justice may have taken place in 2001 at Camp Zeist in the Netherlands and are seeking a review of the verdict reached.

A recent examination by the Scottish Criminal Cases Review Commission of new evidence found that the original guilty verdict may have been unsound and recommended a second appeal be granted.  However Mr Megrahi dropped his appeal prior to his release from Greenock prison on compassionate grounds and the new evidence was never presented.

The petition has the backing of a number of UK relatives of victims, including Dr Jim Swire who lost his daughter Flora in the atrocity.  Other figures backing calls for an investigation include Tam Dalyell, Noam Chomsky, Desmond Tutu and Professor Robert Black QC who was central to the setting up of the original Camp Zeist trial.  Lawyers, diplomats and aviation experts are amongst many others who have expressed dissatisfaction with the original trial outcome.

When Al Megrahi’s first appeal failed, the man who had been the United Nations observer at the original trial, Professor Hans Köchler, described it as a “spectacular miscarriage of justice” and said of the scenario presented by the prosecution: “Only a child would believe such a story.”

Today Dr Swire said:
“If you believe that justice and truth over this dreadful case are important, please sign, and please spread this message to all your friends, asking them also to distribute it to theirs, no matter where they live.”

The actual wording of the petition is:-
Calling on the Scottish Parliament to urge the Scottish Government to open an independent inquiry into the 2001 Kamp van Zeist conviction of Abdelbaset Ali Mohmed al-Megrahi for the bombing of Pan Am flight 103 in December 1988.

For reasons which have to do with the way petitions to Holyrood are organised you will note that there is a closure date of 28th October 2010, so time to sign up is limited.  Please note that signatures under the Holyrood rules are not limited to those resident in Scotland, nor indeed the UK: anyone anywhere can sign.