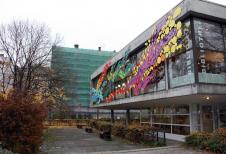 “Berlin’s winter weather is very grey, there is no sun. This sculpture, even when the sun is down, shines by itself. It is a colour explosion”, explains the Catalan artist, Ester Fabregat. The sculpture covers the façade of the Schiller municipal library in Berlin’s Wedding neighbourhood. The artist calls the sculpture “Der Tanz der Kontinente” (Dance of the Continents).

She wanted to bring “another vibe and harmony” to Berlin. She also wanted to tell a message of multiculturalism. “In the South, we are used to having sun; we do not value it so much. Here, there is no sun, but we bring it”, comments the artist. Fabregat’s projects have taken her to France, Greece, Brazil, Denmark, Belgium, Portugal, and Germany.

In September, Ester Fabregat exhibited her work ‘Schwimmer’ (Swimmers) in a Wedding gallery. In 2008, she participated in the ‘Artville’ art fair in Berlin after winning the previous edition in Copenhagen. That year, Fabregat also organised a performance in Berlin, which could be seen in the city’s most emblematic buildings. ‘Der Tanz der Kontinente’ is the latest project of the artist in Germany.

‘Der Tanz der Kontinente’ depicts three human silhouettes swimming along the library’s façade. It aims to bring a message in support of “multiculturalism”. The sculpture, which is 25 metres long and 5 metres high,  moves with the wind and is held by a fishing net, an image linked to “communication” and “cultural understanding”, according to the author. The work, unveiled in early November, will be exhibited until the end of February.

The Berlin project came from a previous work by Fabregat. Last April, she covered the façade of the Town Hall of the Catalan municipality of Valls (South-West of Catalonia). In Germany, they saw her work and contacted her to make a similar proposal for Berlin. The work has been funded by the Berlin Town Hall. The artist says that being a foreigner was not a problem at all, “what matters here is if what you do is wanted”. Fabregat thinks that her work is often more appreciated abroad, although she is also satisfied with the job she performed in Catalonia. “I work fine everywhere, at home or abroad”.