I remember my dad joking, if there was a couple you did not like then give their kid a drum. I’m sure he never did follow up on such an act of twisted generosity.

It is inevitable that we will all speculate on the date of the coming referendum. The jungle drums are working overtime and stretching to fever pitch, matching the

crescendo of Gene Krupa and Buddy Rich as they went head to head on the Sammy Davis show in the most famous drum battle of all time. The Krupa Rich battle was not adversarial but a joyous celebration of their art, shared with an enthusiastic audience.

The timing of the referendum multi drum banging is getting somewhat overheated. It is not the joyous celebration of the objective we shared in 2014.

If I was a unionist strategist I would be watching and rubbing my hands with glee. Many of these articles are well written and argued. There is a lot of talent on the independence writer/blogger scene. It is just getting a bit hot under the collar and will not contribute to persuading former NO voters that they face the greatest threat to their future since 1314 with Brexit and remaining in the UK.

We are falling into the most fatal mistake of all – arguing amongst ourselves.

It is what voters hate most. The Tories shield their disunity behind empty rhetoric. Their drums are soulless, boring and more tuned to a funeral march, yet somehow act as a unity tarpaulin to cover up their own deep dissensions and policies so damaging to our own societal aims.

As writers, we should concentrate on making the case for a better future and there is plenty to write about to motivate our readers. I have waited 50 years to see Scotland become an independent country. The strategy of the banned ’79 group is playing out by delivering in government and gaining powers, some of which are now at risk.

‘Speakin o madmen and shootin at bishops,’ said Lauder, ‘I hae a mind tae visit the Bass. I was speirin ma guidfaither aboot it earlier. James Mitchel is the man I want tae see.’

It is not for me to tell anyone what to write and what not to write. I simply want to raise a concern that the debate over timing is becoming ever more unproductive.

I have my own thoughts on when the referendum may be but I am not going to add to the chorus of divergent opinion. Perhaps two positions set out by our First Minister should be remembered. Firstly, Sturgeon said she would not make a decision until the Brexit deal is known. The other significant moment is when she said she thought ‘it would end up in the courts’.

Independence is about our Scottish values, it is about the type of fair society we wish to bring into being. It is about the wealth we generate and how we share it throughout our communities to provide the best life experience for all. The vote, when it comes, is a hurdle to get over to deliver a very different socio-political experience to the current blockage in a stagnant union.

We have much to write about and much to campaign on. Brexit is the biggest constitutional change in over 300 years and will isolate Scotland in a unionist bear trap if we fail to co-ordinate and reclaim the joyous momentum that took us so far in 2014.

For now I simply caution, like Eilis, in James Robertson’s book The Fanatic: Caw canny.

Yes groups are reforming all over Scotland. Through the National Yes Registry’s Indy 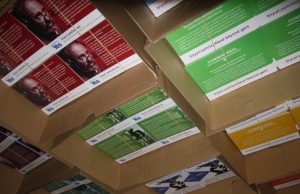 app they are setting in place co-ordinated activity. Groups need material for their street stalls and campaigning activities. That is why ayeMail was set up to provide campaigning material with independence supporting messages 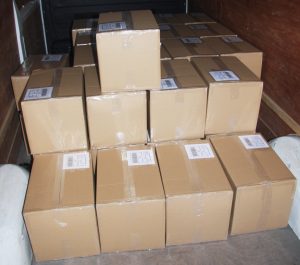 Over the last 3 years – many metric tonnes have been sent all over Scotland -flags, postcards, Wee Black Books and most recently the Keep Scotland the Brand leaflet, with a total print run of 300,000. The next stage is a Colin Dunn postcard on Scotland’s fairer tax system.

To support the fairer tax campaign you can donate to ayeMail’s fundraiser here. After just 24 hours this weekend the fundraiser has reach a third of the target. 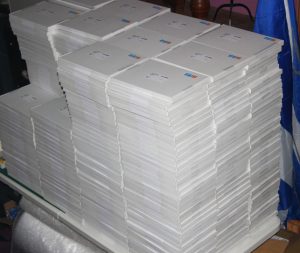 Only positive activity will defeat the Tory/Unionist proven record in spreading and garnering opposition to independence from those with most to benefit from an independent Scotland.

Final word. Another quote from The Fanatic: