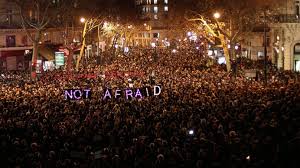 The massacre of journalists in Paris instantly went global as an issue and then, as often happens, presented a local challenge too.

The viral nature of the common space today means that whoever is connected to the net is immediately a media player, not just a silent consumer, if they want to be.

In Glasgow this Thursday (Jan 15) a tight focus will be turned on the impact of the Charlie Hebdo affair when journalists engage with public at Oran Mor in Byres Road at 7pm.

There is no homogenous view within the media about how to respond beyond a generalised sense of outrage and indignation at curtailment of what we take to be freedom of the press. And there are equally many in wider society who deplore what they perceive, not always inaccurately, as wilfully provocative actions by creatives designed, it seems, to offend for offence’s sake.

No one likes being laughed at, as Nationalists know following their sneering depiction in much of the mainstream media during the indyref.

So how would we feel if our portrayal as ignorant, parochial, English-hating subsidy junkies was shoved in our face every week?

With journalistic access goes moral responsibility. Did we see much of that in our media over the last two years? Are we seeing it now over for example the falling oil price?

Were you happy to see the Israeli Prime Minister or the Saudi ambassador linking arms with western leaders in Paris last weekend, where there is at least a tradition of a free press?

Go along if you want to challenge the professionals. There is a bar so it might be like the old days of print with a bunch of indescribables uttering indecipherables to incoherents.

It is organised by CommonSpace (part of CommonWeal) and the National Union of Journalists whose Scottish secretary Paul Holleran is promising free pints to participants (can we check this – Ed ?). On the panel will be:

Angela Haggerty, Editor of CommonSpace, commented: “The Charlie Hebdo shootings have prompted mass debate about what freedom of speech really means and the media’s role in tackling challenging subjects.

“NUJ Scotland and CommonSpace have set this event up to provide an open and honest platform for journalists and members of the public to speak practically about the challenges journalists are facing and how these issues impact on both the profession and wider democracy.

“I hope the discussion will offer members of the media some genuinely useful points of view to take back to the newsroom, and give members of the public more insight into journalism in practice.”

Haggerty will be joined on the panel by Roshan Muhammed Salih, Editor of British Muslim news website 5Pillars. Their fellow panellists will be Mona Siddiqui, Professor of Islamic and Interreligious Studies at the University of Edinburgh, and Neil Mackay, Head of News at the Sunday Herald.

The event is open to the public, on a first come, first served basis.

Truth must not be the first casualty of war

Truth must not be the first casualty of war