BBC Scotland has said it is willing to make its technology and digital capabilities available to the wider industry, and work in a “more genuinely collaborative way with like-minded institutions”.

In a submission to Holyrood’s Education and Culture Committee, the corporation’s management rejected claims that its online presence was damaging local and regional news outlets in Scotland – in particular the newspaper industry.

Addressing the issue, the BBC said:

“We do engage regularly with the Scottish Newspaper Society to discuss all such matters and concerns with them, including the most recent BBC Charter proposals with regard to local journalism.

“Indeed, the BBC welcomes the intention behind the suggestion in the UK Government’s Charter consultation paper that ‘the BBC could have more specific responsibilities for partnership working’.

“A BBC that is truly open to partnership is a major theme of the BBC’s own Strategy Paper.  We want to become a platform and a catalyst for this country’s incredible talent.”

The statement was part of an official submission by the BBC in response to an inquiry by the Holyrood  committee, which is examining the Scottish aspects of the renewal of the BBC charter.  The committee had invited interested parties based in Scotland to submit their views.

Amongst those bodies making their views known was Independent Producers Scotland (IPS), a pressure group  representing film and TV producers. It says the broadcasting industry in Scotland is “chronically  underdeveloped”.

Calling for a more federal system for the BBC, the IPS said:

“We are subject to the imperial power of the BBC, centred in London.  They do not ‘get’ the new Scotland and its independent spirit.

Another critic of the BBC’s London-centric approach is John Archer of Glasgow-based Hopscotch Films.

In his submission, Mr Archer said:

“The BBC is at the heart of life in Scotland, just as it is in the UK: the dominant cultural force and the biggest cultural asset.  Through commissioning for Scotland it reflects Scotland back to itself.

“But BBC Scotland remains too much of the branch office of an empire, subject to the imperial rule of the centre in London.”

‘NOT FIT FOR PURPOSE’

There was also criticism of the BBC Trust, with the Royal Society of Edinburgh [RSE] describing the watchdog as “not fit for purpose”.

“The Trust model has failed to keep pace with the changing devolutionary settlement across the UK.

“A stronger governance model with a greater level of accountability to the people of Scotland (as well as Wales and Northern Ireland) is necessary.”

The RSE gave cautionary support for the federalisation of the BBC, adding: “We are broadly supportive of this proposal but care must be taken with its implementation.  Federalisation would have to take account of the asymmetry of the UK.

“Any new approach must be design ed to strengthen the arrangements in different parts of the BBC, but it must not be at the expense of reducing its scale or scope and its social relevance across the UK.”

“The Scottish Parliament should be in a position to hold BBC Scotland and the BBC in Scotland to account.

“It is appropriate that the BBC should make itself available and accountable to Holyrood despite public service broadcasting remaining a reserved matter.”

“In parallel with strengthening its UK coverage the BBC must provide a stronger news service for Scotland.

“On radio, listeners have long had a choice of news programmes, covering international and national issues, edited from Glasgow or London.

“The RSE is of the view that such a choice should exist on television, with the provision of an integrated international and national news service edited in Scotland.  It is long overdue.

“Strengthening the news service for Scotland and the UK must be a priority for the next Charter period.”

In its own submission, the BBC defended its TV and Radio news coverage, citing Reporting Scotland and Good Morning Scotland as evidence of its success.

“Reporting Scotland remains the most watched television news programme in Scotland.  There was comprehensive coverage of the 2015 General Election, with, for the first time, live broadcasts from 59 declarations at all 32 counts.

“As the election results started to come in on the night (7 May) viewers tuned in to BBC One Scotland, which attracted an audience share of 31.5% between 2155 and 0200, well ahead of the viewing figures for any other channel in this slot.

“Recent changes to the Radio Scotland schedules were put into effect in order better to serve audiences in Scotland, particularly given the significant rise in interest in current affairs and politics that took place during the Referendum campaign.

“To this end, Saturday and Sunday editions of Good Morning Scotland were introduced and the weekday morning phone-in programme, presented by Kaye Adams, was extended from 0900 to 1200.

“Newsdrive was also extended to 6.30PM each evening.  Recent Rajar figures indicate that the changes have proved popular with audiences.”

To read all submissions to the committee, click here. The inquiry will take oral evidence on January 5 and 12. 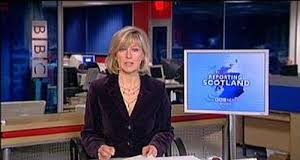