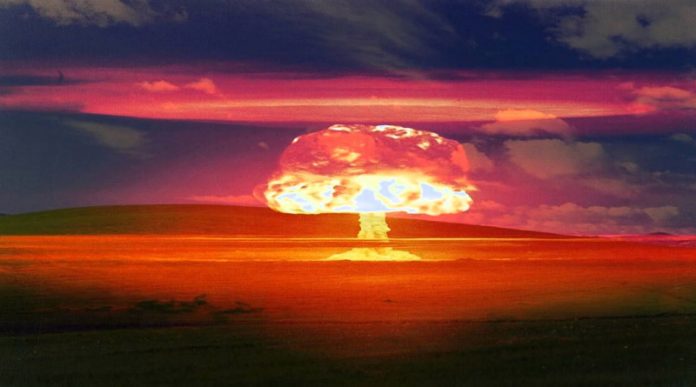 Earthquakes in Mexico, a fusillade of hurricanes in the Caribbean, the unstoppable warming of the Earth, a Dr Strangelove President threatening total nuclear wipe-out, jackboot authority restored to Catalonia and an economy-crashing Brexit imminent as a shambolic government devours itself.

If this isn’t Armageddon, I don’t know what is. Why Trump missed out Kezia’s resignation from his address to the UN will be debate by historians. I can only assume his advisers thought it best avoided in case he was asked to endorse her replacement.

‘You mean it’s a contest between a Communist and a Muslim?’ You can see his dilemma…

Of all these global crises – Kezia apart – climate change is the most terrifying to me because it fits into a long-term worldview that mankind’s destiny is to ‘progress to destruction.’ In other words, we will develop science to the point where it wipes us out. We constantly create without weighing up the downside. So we discover nuclear fission and create a super efficient power source from it, nuclear energy. But we still haven’t worked out what to do with the dangerous waste it generates, therefore we pretend it isn’t really a problem.

We produce a mass means of water distribution – plastic bottles instead of cans, glass bottles or animal skins – but don’t know how to destroy the empties. The result is that millions of tons of tiny plastic particles are now in drinking water and in the sea. We don’t know what impact it will have on human health. But it’s definitely killing life in the oceans.

We invented what our ancestors would regard as time travel – airplanes that whiz us around to view the dazzling panorama of life of Earth yet those same planes are killing wildlife. Sixty seven per cent of all wild animals will have been wiped out in three years time.

Eighty per cent of rain forest in Ivory Coast has been destroyed to make way for cocoa because of our love for chocolate.

Sperm count in western males has halved probably due to lifestyle – mobile phones, smoking and diet – while science allows women to have children later when the risks are higher. Combined, the two trends point long term to human extinction.

As Ruth Davidson might say: ‘What is the First Minister going to do about it?’

Measured against the scale of issues confronting us, Scottish politics can seem miniscule and irrelevant. It isn’t of course, because the only hope we have is that every one and every group do whatever they can to support life. And no one will do anything without leadership.

The way to change the world, as it were, is to change the culture of thought. You may remember the days before seatbelts in cars when there was an agonised outcry at such breach of civil liberties in demanding that ‘perfectly safe’ drivers would be forced by law to buckle up. That quickly changed with rational debate about the dangers – and, of course, cheeky Jimmy Savile.

Smoking indoors was another No Go area that the public would simply defy. Who was going to tell a pubful of boozed up blokes to stub it out? And yet…

The only way I can see of making effective progress is through political partnership. That means agreeing on areas where it is possible and being prepared to compromise in these areas for a common good. Where there is a principle at stake, the agreement is to disagree.

For example I never understood, apart from hubris, what prompted the disastrous decision by Ming Campbell, Tavish Scott and Nicol Stephen to refuse coalition with the SNP in 2007. Sure, they gambled the Nats would fail but what blinkered them to the possibilities of a combined programme for government with a red line clause on an independent referendum? They could have withdrawn from government if the SNP tried to legislate for it. They put self-interest and personal bias before national interest and have never recovered.

Mostly, of course, when it comes to the vote, there is compromise and mostly the government gets its policy enacted because, in truth, there is little between the parties on the bulk of domestic policy. Labour and Liberals dance to the same Nationalist piper and have to look for ways to differentiate themselves from the SNP. (There shouldn’t be a national police force and tampons should be free to ALL women).

Most uneasy of all is Davidson who is canny enough to know the Scots have a soft spot for centre left ideas while her own hardcore voters are as right wing as UKIP and would happily wave in Trump to nuke Holyrood if the fallout didn’t reach Morningside.

There is a centrifugal force which drives the parties together and often the only brake is tribal resentment and personal animosities (although these are, in my experience, rarely as toxic as the pantomime behaviour in the chamber would lead you to believe).

Which is why I’m bemused by the rejectionist approach of the Labour contenders who are both bitten by the same bug and infected by the delirium that Labour folk hate the SNP and don’t want to work with them. Quite how they square a refusal to work with the party of government on matters of shared interest with a passion for progressive policies, I can’t for the life of me see. I also don’t believe it’s true because the pressures to do the right thing can’t be ignored for long – as the idiotic Tories are discovering over Brexit. Learn the lesson of Canute. So I assume all the No Deals, No Alliances talk of Sarwar and Leonard is for the Labour loyalists who are the electorate in this case and have found they need to reject the SNP in order to conform to Corbyn’s One Britain agenda.

That’s fine as in-house posturing but it will look limp when the brothers and sisters vote with the SNP anyway. It also stores up a serious problem for the new branch office manager because a united front for Scotland is going to be needed to resist the Tories’ power grab of devolved responsibilities. It’s one thing for Labour in Westminster to moan about it but it’s in Holyrood where should-to-shoulder work will be required to resist the onslaught. That implies joint agreement, private talks, public shows of solidarity and a sense of 1999 cross-party unity that sits at odds with the current leadership narrative. Scots admire those who appear to put their country above party and it was failure to do so that led to McConnell’s demise in 2007. Labour voters should hope the No Pact emissions are just that – hot air.

I think the leadership contest this time points to a real split in Labour affiliations in a way that Kezia and Ken McIntosh simply didn’t two years ago. The old Labour pragmatists are facing a Militant-style insurgency (albeit more polite in tone). The Corbynistas are as shameless in approach as any Blairite machine – witness the windy rhetoric over equal pay AFTER it is addressed by the incoming SNP in Glasgow having been resisted for decades by Labour and subsidised by taxpayers. It is a familiar trick true to type – forget reality, just deliver the message. It says there is only one way and it’s our way. We start at Year Zero – the politics of Pol Pot.

Yet the overarching message chimes with the times in seeking to overturn the privileges of the few in favour of the many. As a message that works but it looks like it’s all Jeremy has got, that slogan, as his silence over Catalonia and the Spanish state authoritarianism resonates and confusion reigns on his true position on Brexit.

Leonard will struggle though against the party machinery which favours Sarwar. His family tentacles and patronage run right through Labour in Glasgow and he is clearly a driven man, of a sort Kezia simply isn’t. (I honestly thought we were told she was in this for the long term, that she was the new generation). Sarwar may be motivated by social justice but he has the look of a son put on a gilded path and expected to match the father’s achievement. The only thing he does have is staying power – no amount of rejection will deter him. He failed in 2007 when no Labour candidate made it through on the list and lost the Westminster seat in 2015. So he keeps on coming back which means he isn’t a quitter.

A lifelong Labour member told me she voted for Murphy in 2014 despite disliking him and what he stood for because the party needed a known quantity in charge, someone with experience, not a rookie.

The same looks likely to happen this time when known entity Anas Sarwar can lay claim to the experience and background of an old hand not in the pay of the unions, someone who, along with Jackie Baillie, will wind up the Nats remorselessly and give the entrenched Labourites something to cheer and chuckle about.

Shared platforms for progressive policies? You can them two a penny at the cash and carry.

Labour has still not resolved its dilemma over Corbyn – witness Sarwar sucking up having denounced him previously. The vein of antipathy will still run after the leadership vote and we will thrill to the sight of Anas bending history to claim he is a Corbynista too.

But none of this will get us near a new kind of politics in which we confront together the gathering clouds of the inevitable crises buffeting Scotland. No Pacts. No Referendum. No Alternative. That isn’t going to do it.