I don’t expect this to be easy but – bear with me – some background noise might help.

Nicola doesn’t like Boris, Nigel, David or George. Nicola does like Ruth and Kezia but they’re on different sides to Nicola.

Nicola wants Scotland to be independent but Ruth, Kezia, David, Boris and George don’t – though maybe Nigel does (but not really). And Scotland has already voted No in a referendum.

But Nicola does want Scotland to be in the European Union and so do Ruth and Kezia, which means they’re all on the same side – as David and George.

But Nicola says Scotland will only have a second referendum – to be independent AND in the EU – if the rest of Britain votes to leave the European Union – and Scotland votes to remain. 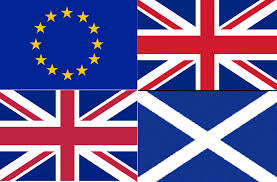 So, Nicola says Scotland must vote to remain and she hopes the rest of Britain does, too, which will mean that there won’t be a second independence referendum, which neither Ruth, Kezia, Boris, Nigel, David nor George want – but Nicola does.

When Scotland voted on independence, a lot of people were scared of joining the Euro, so they voted No. But Nicola says that, if Scotland votes Remain and Britain votes Leave –  which she doesn’t want – then Scotland will have its second referendum and may then use the Euro, which hardly anyone wants.

So, in summary – according to Nicola: if (and only if) Scotland votes Remain but Britain votes leave, then Scotland may have another independence vote – AND, if Scotland votes Yes, the country may adopt the Euro.

Confused? You probably should be. I was asked to keep this simple but I’m not sure that what follows will help.

If there is one gratifying thing about the European Union referendum debate (and I’m sure I’m not the only one to feel utterly dispirited by the whole shebang), it must surely be the temporary cessation of hostilities towards the Scottish National Party and, in particular, Nicola Sturgeon.

The Herald has barely a bad word to say about her, even managing to credit her with “some justification” over the possibility (not scaremongering, of course) of a second referendum in their editorial.

And it seems like ages since the SNP prompted the Guardian to pour forth with a polemic to challenge the rationality of right-thinking women and men.

You can almost hear the thud of old, wet leather being kicked between the trenches as Paul McCartney sings the Pipes of Peace in the background amid all this fraternising (no sexism intended).

So, it seems safe to conclude that the Remain side view Sturgeon as a sufficiently valuable ally against Brexit to be worth taking the risk of affording her subsequent credibility in the campaign for Scottish independence.

So much for the political intelligentsia.

To the bamboozled, however – amongst whom, beggin’ yir pardon, your lowly scribe must number himself – Sturgeon’s interventions may call into question the clarity and potency of her arguments on behalf of either cause.

Not so much by the Ariadne’s thread-like logic of Sturgeon’s pronouncements as by the reasons why she chose to speculate on such labyrinthine chances – with the ever-present risk of her hopes and aspirations being reduced to a pile of Minotaur faeces.

As Sturgeon said, denying that she might be confusing anyone: “Let me be clear I’m not basing my Remain vote on what it means for independence. But if you are, then the logic of that position is that if Scotland votes to leave along with the rest of the UK then the premise, that particular premise for a second independence referendum, doesn’t arise.”

I’m confused by the whys, the wherefores and the what-the-[things that would not normally appear in any publication catering to polite society].

They avoid hypotheticals because it is too easy to fall into the trap of committing themselves to positions which are not even real but for which they can be criticised in advance and only vindicated through experience that may never be realised.

They tend to avoid absolutes because it is a special kind of political madness (or extreme confidence) to commit yourself to a course of action, never mind limiting your options, in advance of unforeseeable circumstances.

Any politician not seeking citizenship of that mythical land of never-ending wriggle room, is either a naïve fool or possessed of the confidence/reckless ambition of Alexander the Great.

Yet, by insisting that there is only one currently foreseeable scenario by which Scotland could hold a second independence referendum, Nicola Sturgeon seems to have ventured into both territories – and tossed in a grenade in the shape of the Euro, for good measure.

Is this really the mature, articulate, confident, charismatic leader who so seamlessly acceded to the de facto leadership of the entire independence movement?

And I use the term “de facto” advisedly. Because, while Nicola Sturgeon does undeniably currently enjoy legitimate and emphatic popular leadership and status, that applies specifically to the SNP – the overhwelmingly-endorsed representative party of independence.

Yet, being a head of a government and leader of a party does not make anyone the physical, intellectual or political embodiment of a movement or ideology and it is dangerous to entertain contrary notions.

Once, to say you were voting for Tommy Sheridan was often used as convenient shorthand for supporting the Scottish Socialist Party. The SSP was never defined by the ideas of Sheridan, though his was the most charismatic voice and his downfall was its virtual destruction.

And Sturgeon should not presume that her power, status and popularity mean that she is the sole thought-leader of the independence movement or that hers is a voice to be blindly obeyed.

If she truly recognised that fact, she might think to present a simpler, less confusing, less absolute case.

And she might not conflate the opinions of those who disagree with her as giving succour to the far-right who have thus far succeeded in reducing the debate to a slanging match centred on the basest of fears.

There are many, irrefutably on the political left and on the pro-Indy side, who hold different views.

Jim Sillars, for example, seems to be routinely dismissed as yesterday’s maverick – a former stalwart who cannot move with the times but who has to be heard, if not listened to.

But, however inconvenient his refusal to toe the party line, Sillars, too, has a competing “logical” case to make:

“Yet Brexit means that the UK will no longer be a member state, as its status will change with an association agreement. For the EU the issue of Scottish independence from the UK changes along with it. That is something the SNP does not seem able to understand, yet it is of enormous importance….

“Brexit under Article 50 makes it politically easier for the EU to accept an independent Scotland in an association agreement, than as a member state. Such agreement would not be subject to an EU Member State veto as it would be by qualified majority voting as set out by clause 2.”

Whether you agree with Sillars or not, the very existence of his “logical case” invites criticism of Nicola Sturgeon’s absolutist position.

Where Sillars illustrates a possible case for voting for Brexit, Sturgeon insists that “the only sensible and logical vote is one for Scotland to remain in Europe”.

Whose argument is the stronger is a matter of conjecture, yet to say that there is only one logical step invites the inference that Sturgeon has not considered all the available options or how to deal, tactically, with that scenario that she says she most wants – a UK vote for Remain.

If that is the case, it either calls into question the quality of her advisers or at least how much heed she pays them.

As that most ruthless, but successful, CEO, Jack Welch said of leadership: “… if you’re a leader and you’re the smartest guy in the world – in the room, you’ve got real problems.”

Which reminds me of an article by Dr John Robertson, implying that Sturgeon may be being seduced by the lure of a “presidential” style of leadership, where a more collegiate

Is Sturgeon a little too confident that she is always right and that the electorate should do what she says?

For my part, I can only say that it takes someone far smarter than me to understand why such a savvy politician should seek to speak for an entire nation’s aspirations and yet do so in such a confusing manner, painting those who share her dreams of independence into such a tight corner.

Does she think her comments will be forgotten by her opponents, following a Remain vote? Or is she so certain of the results that she believes that, on Friday, she will be proven to be the most audacious and visionary politician of her generation?

There are arguable cases for both Leave and Remain – from a Scottish independence perspective as well as wider political and social considerations.

But Nicola Sturgeon has sought to dictate to voters that there is only her way, based on her bafflingly-complex (if not flawed) logic, while introducing unnecessary uncertainty, as if for added spice.

It sounds like the political equivalent of: “Trust me; I know what I mean and I know I’m right.”

That might prove to be indicative of superb political nous – or the sort of naivety that only leadership can expose.

Friday morning will bring a little clarity. We will either have a Scotland-in/Britain-out scenario or a serious discussion as to how the leadership of the Scottish independence movement should be defined.

Or whatever of that movement remains.

Why leader’s Murdoch bond is a step too far for this...

Sturgeon has her mandate, but where are all those genius forecasters...