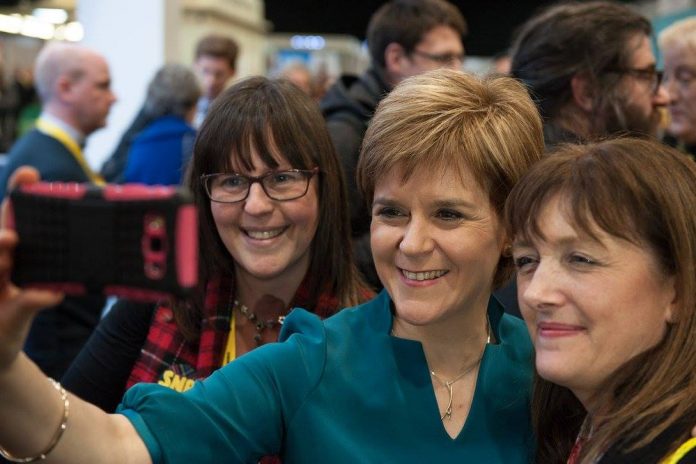 With the SNP’s manifesto launch, we now have a clear picture of how Scotland’s public affairs will be managed over the coming five years. As Nicola Sturgeon noted, “unlike the manifestos of other parties, this is a programme for government on offer”. As the only manifesto with any chance of being implemented after  May 5, it’s substantive, it’s smart and it understands that the SNP’s real opposition is 400 miles to the south.

Within this document, you’ll struggle to pinpoint material that folk are likely to find disagreeable. But its appeal is not simply to every demographic, as the imagery tells us. Rather, as has been re-iterated throughout the campaign, its beneficiaries are the inhabitants of every household in Scotland.

On one level, this is a clear articulation of what government should be — a project based on collective solidarity from which we all benefit. It is also well crafted political messaging, fitting all of these small ingredients — a small business bonus here, some extra childcare there — into a wider narrative about the nation as a good society that works for all.

Of course, there is ample evidence to dispute that picture. The claim to tackle inequality does not line up with the evidence that throughout swathes of Scotland it is as ingrained as ever. Redistribution is politically unfashionable everywhere and historically, equality is incompatible with unbridled wealth accumulation. Interventionist policies can assist the needy at critical points in their lives but they cannot tackle the systematic underlying reality that Scotland is a deeply divided country and will continue to be so in 2021.

But such truths rarely get in the way of Holyrood election campaigns. Instead, a masterful re-election campaign has played a deft hand, not least with a grid that covered controversial and difficult questions on income and council tax early in the calendar. With dry and unpalatable matters of revenue raising now a distant memory, the party is free to offer up a mix of winning policy commitments. The emphasis is squarely upon seeking a ‘personal mandate’ for a popular First Minister, a crucial aspect to every successful SNP campaign thus far: flagging up the ongoing reality that most opposition politicians in Scotland remain second rate at best.

The gods have been kind to the SNP and the party is keen to be munificent in turn. The baby boxes, the renewables prospectus, the super fast broadband, the cheaper flights — there is something for everyone in there.

Realising how smart universalist policies can be, the party remains able to position itself on the centre-left by taking a stance agains the ‘freebie’ or ‘something for nothing’ narrative that often seems an inevitable part of British politics. Yet it is perhaps a product of the SNP’s centrist anxieties that we have not moved on to talking instead of the provision of university places, prescriptions, childcare and personal care, as publicly funded. Free at the point of use, they are still paid for, but the burden falls collectively rather than on the individual.

Nordic countries offering similar programmes do so from the starting point of fundamentally different political cultures, in which the state is perceived as a conduit for sharing and solidarity, rather than an aloof interventionist force. A similar change of attitudes and language will be necessary if universalism is to form the foundations of a sustainable social settlement in Scotland.

The reality is not that the SNP have found some kind of post-ideological nirvana where such issues are apolitical. Rather, they have managed to skilfully defend Scotland’s fiscal position from within the United Kingdom — a result that was, significantly, placed right at the front of the manifesto document itself. The ideological questions of tax and spend are neutered of their difficult content and instead become matters of constitutional wrangling. Everything else slots into place behind the notion that Scotland needs defended and the SNP are the only party capable of mounting that defence.

This brings us on to the more vexed question of how the party now relates to its foundational commitment to Scottish independence. Such a strong record and future programme begs a slightly awkward question. Namely, if we live in a country in which every household already benefits, why does it need to be independent? Surely a system already delivering for everyone is by definition as good as it gets?

The query is not intended as facetious — though it has become increasingly difficult to offer even the most reasoned commentary about the SNP without some sections of its massive membership assuming that they are being derided. Members of a party at the height of its powers still seem bafflingly insecure with a political posture in which they are no longer the underdog.

Efforts to persuade more Scots of the merits of independence, planned for the summer, will be crucial in working out how the party can square its commitment to ongoing devolved government with the vigorous pursuit of independence. A slightly cryptic remark about the proposed content for this move flagged the scale of the challenge: “The case we make will be relevant to the complex world we live in today.” Steps towards the difficult and volatile questions of independence will inevitably move voters away from the disarming optimism that has won the SNP so many victories.

There has been a massive increase in geo-political and economic instability since 2011, which any new plan for a Scottish state must seriously consider. In a hostile world, what can motivate Scots to step out into the unknown when they are currently insulated by devolution? What glittering prizes can the SNP conjure up premised on statehood, that are not already evident in the content of its devolved offering?

The success of the SNP’s gradualism, its competence in government and the need to re-state Scotland’s apparent era of civic excellence in the present, inevitably impacts on the case for independence. If we are experiencing ‘better’ in the present, why change?

It is self-evident that the SNP are an astonishingly successful political party. But all success come at a cost. It now seems perfectly likely that this election will represent the moment when a wider independence movement no longer became feasible. Whether or not there is room at Holyrood for a range of pro-independence voices belies the basic point that supporters of the SNP are bound to invest their hopes (and votes) in the party that has been the overwhelmingly dominant pro-independence force for decades. For many, there has only ever been one vehicle to get to independence; for more recent converts, so much was invested in the last referendum that only the certainties of party membership offer a way forward.

The SNP self-consciously presents itself as something more than just a political party. Its self-image is something of a hybrid: capable of scooping up the insurgent, youthful movement politics of protest and passion (now taking root throughout Western Europe and America) but also able to function as a moderate parliamentary force.

The problem of one party speaking for an entire movement is well known. The UK Labour Party is perhaps the most glaring example of how this can go wrong. Parties can become too large, and thus unwieldy. Without serious alternative sources of power in the streets, in civic society, or in parliament itself, the kind of large scale change that independence represents is impossible to achieve.

The privileged position of being uniquely capable of wielding power inevitably comes with greater scrutiny. If no one else can campaign for First Minister or offer a programme for government, voices beyond party politics need to step up to the plate in order to question power and keep debate alive.

Let’s not forget that the gods can turn nasty. The potential impact of another economic crisis, or Brexit, could easily jeopardise the couthy ideal of ‘everyone’s a winner’ Scotland. In such a scenario efforts will be required to defend the benefits of devolution and the additional rights that Scottish citizens have built up within it.

In such an eventuality, or in the staging of another referendum campaign, the SNP — despite all its current energy and scale — will need allies beyond its own ranks, and beyond Scotland.