Derek Bateman’s article about Labour’s exploitation of the holiday period to line up several days of pre-arranged press coverage sparked an angry reaction from a few of his targets — but also from others on the SNP side who see nothing wrong with the practice.

Here he reflects on the issue of the Scottish media and its perhaps too-cosy relationship with our political parties.

Silly me! Imagine not knowing that every news outlet in Scotland repeated almost verbatim press releases produced by political parties day by day throughout the holidays. And me a media professional. Oh dear.

I’m told in jeering tones by journalists that: ‘We’re all at it. It’s been going on for years. We fix the stories two weeks in advance and print what the parties tell us. No problem.’

Well, I think there’s a problem alright. Because however cynical Scots get about their media, most hold to the view that newspapers are at least expertly edited, separately researched, specially written and editorially independent. Editors and owners always boast about upholding their values. They are beholden to none. When the Scotsman launched exactly two hundred years ago, it declared to the world its ‘impartiality, firmness and independence.’

Now, every industry has its wrinkles and mild abuses to make sure the machine is oiled. I get that. I was around when the print unions employed widespread abuses to screw as much as they could from the publishers. I was a trade union official versed in gentle threats that would disrupt the paper if demands weren’t met – never mind striking, which have done I think four times.

I’ve written about the casual fakery of correspondents fixing up with contacts to hold a story for a quiet period – a practice that of itself does no harm except that the copy will inevitably be written the way the contact wants it – in his interests and not as unbiased journalism. That’s because he’s doing the journalist, who’ll be on a break, a favour.

I do think the public has a right to know when mild cons are being perpetuated but suspect that, like me, they’re not unduly bothered.

However, the industrial scale of the agenda-rigging revealed by the Labour document is on another level. An entire two-week list of pre-written articles, all in favour of the party’s interests, complete with quotes and written as if immediate breaking news rather than stitched together four months ago, fails any test of proper journalism. That so many of these PR releases are published unaltered, unchecked, sometimes with nothing more than the obligatory “it’s no’ true’ quote from the SNP, is anti journalism.

It didn’t happen when I was working. It’s true that I was at the BBC rather than a newspaper for years but I recall no moment when the ‘Labour List’ came in to the office or a producer said: ‘We’ll run that today to comply with Labour’s embargo.’ And in newspapers where I last had a full-time job in 1991 and freelanced until ’97, this simply didn’t happen on this scale, if at all.

I tried to imagine what the editors I worked under would have said if, as political editor, I’d offer a roster of pre-written stories to run every day of a holiday. I imagine Arnold Kemp calling in Harry Reid and telling him: ‘Bateman wants us to agree to publish this list of material written for him by the Labour press office so he can go on holiday. I think we should tell him and the Labour Party to fuck off. If he wants a job with Labour, he should get one. I don’t pay him to take orders from them and nobody tells me what and when to put in my paper. This is the Herald, not the Banchory Bugle.’

Another, Andrew Jaspan, would have taken delight in telling me to write an entire article about how a political party tried to subvert the journalism of Scotland on Sunday. ‘Let’s expose them and all the papers that use their stories’, he’d say. ‘Make the point that we lead the news, we don’t follow party dictum.’

But who are today’s editors? Can you name one? Would you recognise a photo? Of course, not. They’re non-entities with no wider role in Scottish life, commanding no public respect. In fact, it’s likely that if one did dare put his head above the parapet to speak on a matter of concern, if he was recognise at all, he’d be chased out of town by the mob.

The really interesting reaction to yesterday’s publication was just that – the divergence of opinion between the insiders to whom this is normal and the reading public who suddenly realise they are being conned.

I had the Labour document so it was with glee that the insiders declared that all the parties did it, as if that knocked the story. Kieran Andrews of the Sunday Post, an investigative journalist according to Twitter, said he had the SNP’s own list of stories, as if that made it alright. The reality to the readers of course, was exactly the opposite. It made it ten times worse that the entire political establishment had a prepared roster of the articles produced by the parties and printed by the papers throughout the holiday. This is the communications business so why don’t they simply tell readers that for the next fortnight many of the stories in their paper will have been agreed with the parties and more or less written by the party staff? If there’s nothing ‘wrong’ with the system why not declare it? After all they’re in the disclosure business.

The lack of self-awareness and the disconnect between the journalists and the newspaper-buying public is stunning. My Twitter timeline, apart from those complicit, is universally shocked and critical. 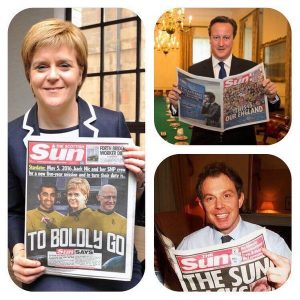 If you ever needed an insight into why the Scottish papers are in irreversible decline, this is it. People hate to be conned. And the knowledge that their paper, or indeed the broadcasters, are part of an undeclared comprehensive fix to feed them contrived articles fitting a party agenda, feels like cheating.

Being rumbled of course isn’t pleasant which why some in the media react so violently to being exposed. Paul Hutcheon of the Herald said my views were as pathetic as ever, although he offered no explanation or justification, sounding more poisonous pipsqueak than investigative journalist. If I’m so pathetic, why do you think he reads me? (That’s two investigative types mentioned so far. You’d think they’d be inclined to expose the wrong-doing in their own industry, no?)

Journalists have always had to work with their sources and there is often a measure of compromise involved. But is there no longer pride in the job, a sense of professional dignity that prohibits being used by lobbyists? Do they honestly tell themselves it’s OK to conspire with those they are meant to scrutinise because they need a Christmas break?

You may wonder what did used to happen before the current generation came along. In my recollection, we reduced the size of the papers, we filled space with picture essays, we wrote or commissioned time-neutral news features. On occasion we didn’t publish at all at Christmas. I don’t remember writing pretendy stories in cahoots with politicians with my name on them while I had my feet up at home.

The answer of course is times have changed and they don’t have the same number of staff. Does that mean they should all connive to con the readers? There are retired journalists who share my worries about the demise of a vibrant and intelligent media but who keep their peace – just as there are ex BBC executives appalled at some of today’s output but prefer to keep quiet to avoid embarrassing the organisation. I don’t agree with them.

We shouldn’t let the Scottish media drift into irrelevance through silence.

I get it in the neck for attacking the quality of the BBC and the papers but, unlike many in the nationalist camp, I don’t want to destroy them. I criticise because they are not good enough. I want pluralism and diversity in the media. I don’t mind the pro-union commentary – but I despise the confluence of reporting with opinion that passes for modern journalism.

You have to wonder: Is this placement of stories only happening at Christmas? Is it only the political parties who get to put stories straight into the papers unchecked? Are other organisations and companies doing the same? Do you know the answer?

Do you imagine the media will tell you?

I think there’s a deeper concern here for Scottish nationalists. I see Mhairi Hunter, the Glasgow SNP councillor, was another justifying this ‘chocolate box’ charade on the grounds that it gave the press office staff and the journalists a wee break and denying it amounted to collusion. It’s not a secret just because people didn’t know, she says. Mmm. I think she’ll find the public reaction rather discounts that. The stark fact is, if not outright sinister, it is, shall we say, ‘dovetailing’ of interests between the poacher and the gamekeeper. And since, the media – whose job after all is disclosure – purposefully don’t disclose they are publishing according to a joint plan, the public are in effect denied the knowledge they need to judge the content.

Someone in the SNP press office also proudly announced he was checking off SNP-inspired stories in the Sunday papers confirming the We’re-All-In-It-Together nature of the game.

I have news him. If there is one overriding concern among SNP activists, it is the Scottish media. Throughout the contacts I have with party people, many of them street-pounders and door-knockers, the constant refrain is criticism of the appalling Scottish media. Some believe it lost the referendum and that it is the single biggest block to independence.

I guarantee the wee man in the press office and Mhairi that those nationalists will be furious and let down to think that their party is making life easy for journalists who spend their life attacking all they stand for. Before the chocolate box revelations there was already profound anxiety about the failure to rebut effectively, about the softly softly approach taken, the photos of Nicola with the Sun and the general cosying up to a media corps whose output seems to despise their entire project. Ask a nationalist and they will tell you it’s like inviting someone to your New Year party only to watch pee on your carpet before leaving – then saying: See you next year.

What we are seeing is a sign of the casual corruption of public life when managerialism triumphs and the interests of the political decision-makers coincides with the interests of media. Instead of creative tension, it collapses in on itself, but the participants are so close to each other and so removed from the public, they can’t see it. All governments go the same way in time and if the SNP wants to play nice with the media, it deserves all it gets in return.

Even if you don’t take offence at having your news dictated by political spin doctors, what do we say about so-called journalism that puts those stories straight into print or on to the airwaves unedited and unchecked? Shouldn’t newspapers have concerns about the factual content, some of which has changed in the weeks since the articles were prepared?

I thought the coup de grace came from the most ardent supporter of the spoon-fed system – a PR executive – someone I’d never heard of – but that summed it up for me. When the people whose job is to con the public are congratulating you, well then, you’ve been done up like a kipper.