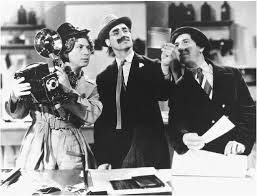 ‘The Labour Party has achieved heaps in its illustrious history: In the forties we created the NHS so that 80 years later, the Tories would have something worth tearing down. In the fifties, our funding of science saw the eradication of rickets and impetigo, although the foreign secretary at the time thought impetigo was the capital of the Ivory Coast (even then we were spoiled for talent). Most recently we gave substance to the biblical idea of ‘Love thine enemy’ by suckling at the teats of the nine-horned beast (a.k.a. the Tory party) throughout the Better Together campaign.’

‘None of these proud achievements would have been possible had the Labour Party not been the broad church that it is. The broad church across which the discourse around Labour’s future recently went off like a ten-bob rocket. Of course we are not really a church — if we were, the warring factions wouldn’t just be gnashing their hymn books in impotent rage — they’d be ripping out the pews and setting them ablaze; kicking down the vestry door before kidnapping and waterboarding the minister.’

‘Cynics see these internal tiffs as evidence of schism, an omen that the party is about to spontaneously congeal into the political equivalent of a Yum-Yum, three months past its sell by date. In reality, this discord is healthy. It’s democratic. And it’s making us look as competent as an England goalkeeper — a tremendous improvement on our showing at the last General Election.’

(Title: A still image of Keir Hardie on a bicycle, over which the title ‘Scottish Labour’s Immigration Pledge’ has been superimposed.)

‘The gap between activists in the Labour party who were stupid when they joined and those who got stupid as a result of joining, is wider than ever. New Slab MPs are three times more likely to get stupid after joining Scottish Labour, than if they’d done something more sensible, like hauling on a pair of Union Jack budgie-smugglers, smearing their bodies with lawnmower grease and attempting to swim the channel lengthways while playing the Internationale on a waterproof kazoo.’

Video: A giant image of Nicla Sturgeon’s face, photo-shopped and morphed to look like Boris Karloff having an attack of wind, looms out of the screen in homage, apparently, to Orwell’s 1984. Chuddy Dogbourne affects the kind of subterranean basso profundo used to advertise Hollywood blockbusters.

‘Despite 9 years in office, the SNP have done hee-haw about this gap. The double un-plus SNP-Bad criminal, Sturgeon should be ashamed of herself. Vote Labour and we guarantee that by 2020 we will reduce the annual migration of stupid people into the Scottish Labour Party to tens of thousands.’

Title: ‘On the economy, we’re stupid’ . This should read ‘It’s the economy, stupid.’ But the campaign budget couldn’t stretch to a proofreader.

A boy the height of tuppence-halfpenny presses his face to a shop window and stares inside in wide-eyed astonishment. The camera follows his gaze through the window to a counter display of doughy savouries labelled: ‘Corbies: Two for a pound.’ The boy runs into the shop and up to the counter behind which stands a shop assistant. The boy and the shop assistant have the following conversation:

‘Cos they’re full of crap. Would you like one?

‘Dinna you worry your beastie-infested heid aboot wurds laddie. The Labour Party rarely uses wurds nowadays. We used to. But people started expecting them to mean something. Since most of our manifesto promises were hollower than a didgeridoo, introducing meaning didn’t seem worth the effort. Now we read only to see what Nicla’s banging on about. Whatever she says gets forced through our hand-cranked Truth Mincer to make SNP Bad-burgers for chummy barbecues down Pacific Quay with the BBC.’

‘Let me explain. How much didn’t you spend today?’

‘Well I didn’t buy nuthin. Impoverished by years of SNP educational neglect, I is.’

‘But how much would you have spent if you’d had the money?

‘Did you know you could borrow against that unspent fifty pence? You can have twa Corbies and lots more besides!’

‘Crivvens! Right. I’ll tak twa Corbies, a pint of whelks and a yard of 80 Shilling Ale. And it’ll cost me nothing?’

The shop assistant bags two Corbies and hands them to the boy before dropping a handful of coins into his hand.