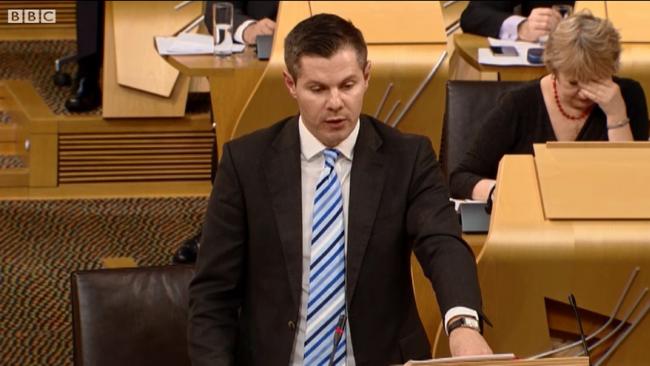 The SNP ain’t half cute when it comes to strategy. Sure, you can argue they got the Brexit Means Indyref2 case wrong, but I would counter that the strategy was right – and will prove to be so. Rather it was the bolt from the blue of a sudden General Election that caught them cold before the reality of Brexit began to bite on the public mood.

The Budget strategy as it unfolded yesterday looks more than cute – almost too clever for its own good. It ca’s the legs out from under both Labour and the Tories while investing more in what the public wants. It helps balance the books after Westminster budget cuts. It gives a boost to workers struggling under the burden of austerity and inflation. Most astonishing of all, it made Derek Mackay look almost interesting.

The story isn’t in the smiles and cheers from his own benches that is our guide here. It’s the unanimated faces of the opposition, winching as their coconuts are knocked over one by one.

The result was incoherence – a regular trait of Murdo Fraser whose Tories took the underwhelming line of claiming a manifesto breach. (As in the SNP promising not to increase basic rate tax). Mmm. Two problems here. One is that they have both introduced a lower tax rate for lower earners and retained the basic 20p rate. Also the maths show that 70 per cent of all taxpayers will get lower bills in any case. Another is that no one remembers what was in your manifesto and they don’t expect it to stand the test of time no matter which party you are. (And a third problem – who believes the Tories could give a Bulgarian passport about standard rate taxpayers? Their supporters pay £50,000 to dine with the Prime Minister whose husband works for a financial firm that hasn’t paid tax for 10 years. It’s the bottom rung of earners who are being forced into poverty with their children by Murdo’s Tories. The workers? Give me strength.)

And I fear the hysterical rant of Richard Leonard wasn’t a genuine emotional outburst at social injustice, but his now routine performance in the chamber. Watching him hop on the spot like the Nutcracker soldier-on-a-string on our Christmas tree, face reddening, made me think of the training the Socialist Workers used to give to revolutionary tyros. The trick was to make the crowd angry which you did by blaring your own fury at them – rational argument was a waste of time. Is he now channelling a hidden past?

His argument that this was tinkering is of course correct because the reforms are the least that could be adjusted, a penny here and there, so of minimal fiscal significance in themselves. But it surely is a mistake to imagine that Jock Tamson and Jean are tutting at Reporting Scotland and moaning that they really should be taxed more and more. There is limited taste for handing over more when we can see government policy in London failing the economy going forward on top of a decade of brutal austerity. The actuarial modelling also shows that if you tax the higher earners five pence in the pound more, the actual tax take falls as they take action to avoid and evade.

There is a real lack of impetus among the Unionist front just now. The trade union demo outside Holyrood ahead of the Budget looked paltry and insipid. No towering Campbell Christie figure, no rabble-rousing Bill Speirs, no mob energy that demands a response. Not a rallying cry, more a yawn.

In the chamber it wasn’t just Richard reminding us of the dearth of talent. A glance behind him showed the previous leader (well, previous three leaders, actually) sitting in isolation, a semi/tragic prompt to voters of Labour’s 20-year decline.

On the other side – now there’s an appropriate phrase – Ruth Davidson is having her bluff called. There is only so far joshing and bullying will take you. On policy detail and development she is vacuous. On the back of her electoral breakthrough to be ahead of Labour there was a moment when her vision of a new Scotland, whatever it is, could have been hoist before an admiring public and shaped the post-election debate. We still get the angry bellows and braying interventions but the lack of anything concrete is proving a debilitating failure to add to the invisible MPs who were to be Ruth’s legion at Westminster. Instead of representing Scotland’s Brexit view – and indeed that of their constituents – they have resorted to voting with the government to facilitate an EU exit without any redeeming case made for Scotland. Not one has asked for any different treatment for their own people and they opposed every amendment which could have ameliorated the impact. How hollow rings the Tory bluster of 2014 about leading the Union or even of equal partnership.

But beware of how the parties are reacting and the inevitable dismal reporting in the Scottish Press. However hysterical they get about income tax (I’ve been muted by Jackson Carlaw!) the key to this budget lies elsewhere. They are diverting our eyes from the measures that really will shape our country’s future because if the public took the time to understand they would see far-reaching benefits beyond the pound in their pocket. That’s why it suits the Unionists collectively to concentrate on a single issue like income tax – it distracts from the wider story of renewal.

A penny in the pound won’t be grudged by those trying to operate a business online in Argyll or in Sutherland and elsewhere, if the £600m to pay for 100 per cent coverage of superfast broadband can be delivered. Broadband is the key to successful business, large and small. It connects disparate communities, combats loneliness, it is an inducement to repopulation and filling essential jobs like doctors and teachers. It will form the heart of future health services. It is increasingly the lifeblood of school learning.

We are a country of small businesses. There is package of support in the Budget including business rates relief – rated nationally at £720m. Their rates bill will be limited by CPI to keep it lower in future. (I spoke to a shopkeeper moaning about the SNP putting up business rates and when I asked how much he was paying, he said: ‘Nothing. I’ve been exempted.’

One of the UK’s major failings has been in research and development so in Scotland the government’s investment is going up 70 per cent. With a manufacturing centre opened and a national investment bank, you see how policy is converging to create a better business environment. That’s where the jobs are made and, after the Tories’ disastrous Brexit, we will sorely need them.

Complex improvements like integrating health and social services are being funded with half a billion pounds which will streamline how help is delivered, directly linking social support to health instead of running two bureaucracies with patients turning from one to the other.

There is no time or space in the outrage-obsessed media to dissect these policies and how they improve all our lives. But even without them it must be clear to anyone with joined-up thinking that paying a few quid extra is worth it if it means not paying £8 a prescription item, or £4 a bus trip or £9000 a year for university.

Indeed, one suspects that the fury of the Unionist Front at whatever the SNP does, amplified by the piss-poor media, is a constant aide memoir to voters that Scotland does things differently. Some measure you may not like but increasingly you are aware that living in Scotland allows the government to behave in a distinct manner, a knowledge that normalises the concept of self-government. The tax raising powers were designed as a trap to sucker the SNP into putting them up to meet their ambitions. Well now they have. They have broken the taboo and unless there is a backlash, they will have smashed the Westminster imposed model. Every step of demonstrating that Scotland is capable is a step away from Whitehall domineering. Growing Scottish confidence converging with London incompetence, now there’s a formula that deserves a cute response.