One thing is clear from the general election outcome – May cannot survive as Prime Minister for long. The questions are – will that be days, weeks or even a few months and who are in the running to succeed her?

Everything about Brexit is in flux, which is the single reason May did not leave Downing Street on the morning of June 9. The execution has been postponed. May would like to think she remains at the helm and acts like a survivor yet stumbles with each crisis into further failures of leadership.

The Tory party is stumbling in her wake, desperately clinging on to get to the summer recess and the official opening of the silly season. Real politic suggests this year will be different with the traditional silly season replaced by the tragedy season. Greek tragedy sweeps over the white cliffs of Dover.

The radicalisation of the far right in British society emphasises the madness of a Tory party playing to the delusion of powerful foreign media owners and actively engaging with extreme elements of orange unionism for electoral advantage.

Any return to one nation conservatism, that some might wish for, is doomed on the coat-tails of extreme forms of unionism lurking in dark corners of society. Then the reinforcements in the form of the DUP crossed the Irish Sea to open negotiations with a government in chaos. Negotiating with the DUP is like dancing with a rubber ball. Arlene Foster has got her £1billion ransom to free May to rule for a few more weeks. £1 billion given to a non-functioning devolved government.

Gawky and uncomfortable with people outside the safety of meetings with bankers and core supporters, May’s response to the blazing torch of Grenfell Tower was inadequate to the point it was distasteful. If Corbyn’s new theme ‘For the many not the few‘ is striking a chord with a population tired of austerity, then Grenfell Tower is a tragic symbol of Tory cuts and their obsessive opposition to regulation and legislation designed to protect the many.

Musings about who would replace May have been going the rounds, Leadsom, Johnson and Davis have all been mentioned. Leadsom didn’t make the grade last time, Johnson backed out and Davis is Brexit hard wired.

Current favourite with the speculators is Philip ‘Spreadsheet’ Hammond. Even if many of us are not keen on the way Hammond crunches the numbers, he at least has numeracy skills. Johnson uses a keyboard to write fanciful fiction and thinks the numbers above the qwerty bit are there for any old outlandish interpretation.

Hammond is considered a temporary fix to get the UK through Brexit or at least a fair part of it.  Not exactly a glowing endorsement but would be available for a rapid switch. Hammond might have different ideas but would likely play the part as he survived the night of the long knives that never was.

Still plenty to worry about with Hammond who threatened Germany he would abandon the European-style social model if the UK was locked out of EU markets. The Guardian reported this was at odds with his meeting with Germany’s Finance Minister, Wolfgang Schäuble in Berlin recently. Hammond is bright enough not to risk that ploy with Schäuble.

Then there is Ruth Davidson, flavour of the month in London metropolitan circles. Her staunch support for Remain won her plaudits a year ago when she went to Wembley Arena to make the case to stay in the EU on the eve of the referendum. A stark contrast with May who had to be bullied out of her hidey hole in the Home Office to speak up for government policy.

May lost 25 Tory seats in England and Wales whilst Davidson won an extra 12 in Scotland to trim Tory losses to 13.  Suddenly, the option of another Scottish Prime Minister is making waves in some quarters south of the Border.

In the New European, Paul Connew, a former editor of the Mirror, reported on a dinner he had with 10 Tory supporters. Discussing the leadership, none of the usual suspects appealed. Instead all agreed on Davidson.

Survation has been polling on attitudes to May’s possible heirs. They don’t bother with Leadsom. Of their five contenders, all score negative results when loss of support is subtracted from the support they might gain for the Tories: Gove -22, Rudd -13, Johnson  and Hammond both -8 and Davis -7.

Could the Rt. Hon. Colonel Davidson MSP really be in the running? It is possible to plot … well err…a multitude of plots. To narrow it down, I will start with the demise of May as PM and the Tories coalescing round Spreadsheet Phil without a contest. The understanding being he has to face an election for the leadership when Brexit negotiations reach a certain point, or go to the country. Neither scenario is likely to be very appealing but the turmoil of a leadership election could look less damaging.

Davidson would deny she is interested but has been very clear she does not rule out standing for Westminster or deny ambitions to become PM. In the meantime her supporters get to work. Davidson would seem like a fresh face on the UK wide scene and she has shown she can rebuild Tory support in Scotland after decades of decline. Her chances against the tired faces of other wannabes look evens or better this far out.

There is one little problem – she is not a Westminster MP. That has never stopped the Tories getting what they want. Someone would be asked to step aside. A safe English constituency could be offered. I would bet on Colonel Davidson turning that down and looking to oust one of her band of 13 foot soldiers. This is where it gets even more interesting.

The largest Tory majority is in Berwickshire Roxburgh and Selkirk, recently won by John Lamont at his fourth attempt. The Tories spent heavily in the constituency before, and much after, Calum Kerr took the seat from under his expectant nose in 2015, after a long recount. Lamont was determined he would not be denied again and culled what remained of the LibDem vote in 2015 to secure victory this June with meticulous targeting.

Having fought so long for the Westminster seat and resigned as an MSP to concentrate fulltime on winning, would Lamont happily step aside for Colonel Ruth?  I have little doubt. A knighthood, position as head of a public body would be more than enough. Slightly later a seat on the red benches for services to Tory coffee mornings.

Lamont and the Colonel are close. He was her election agent when she stood for the leadership when Auntie Annabel stood down in 2011. Lamont bequeathing a majority of 11,060 and 54% of the vote would do the kickboxing Hon Colonel nicely. And less well-known, little Ruthie spent her early years in Selkirk attending Knowepark Primary School – not quite a Souter as she was born in the Simpson Memorial Pavilion in Edinburgh. The Colonel is not one for splitting hairs.

Ambitions to be first minister could take a back seat, especially if the cards were to fall with a chance of being Prime Minister and assuming command over Nicola Sturgeon.

If you think all this is a fanciful scenario, think again. It has all been marked out in meticulous detail elsewhere.

A few weeks ago the Borders had to fight the Holyrood by-election seat of Ettrick, Roxburgh and Berwickshire as well as the slightly larger Westminster seat.

The Borders better start preparing for another by-election. Colonel Davidson has donned the fatigues and will make much of that in an area with a long military tradition.

The Blame Game / Confusion Theory and our own culpability 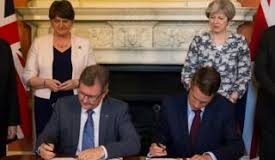