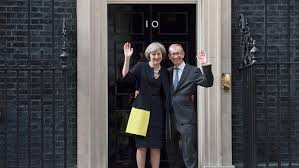 Well, this changes everything. We’re now staring at the carpet-bagging of democracy as a Prime Minister who said Now is not the time to Scotland (there are more important things to do) decides it is nevertheless the right time for her own agenda.

And why does she seek a new mandate? Didn’t she tell us the narrow Brexit vote was all the authority she needed – not only to pursue an exit but a hard one at that – outwith the Single Market and Customs Union. Now it seems that wasn’t the case at all. She will use the evidence of the opinion polls, which lay bare the collapse of Labour opposition, to endorse her no-holds-barred anti-EU approach. That’s a handbrake turn you’re witnessing.

Instead of using a limited majority to persuade other parties round to her case – as the SNP does in Holyrood –and allow opponents to ameliorate some of the harder edges of her full-on Euro idiots, she dismisses the result of the election held only two years ago in order to ram through her policies. Scots, despite a clearly expressed wish to remain in the EU, can go hang. Who cares about them? The imperative, as ever, is to do whatever is required to bolster the Tory Party which is exactly how that calculating coward Cameron got us into this mess.

And, with Scotland more or less out of her calculations because of the SNP franchise, this is an England-only election in her eyes. That’s where the hotbed of racism and parochialism is to be found, mostly outwith the metropolitan centres. They are the seedbeds of discontent she claims to represent in her strident Britain First rhetoric. Cleaning up in England where the official opposition is scattered like post explosion debris, means dragging the other nations of the greatest union in the history of the world along with her, like it or not.

May is planning to use her mandate as grounds for table thumping in Brussels. (She will do it without the votes of EU nationals living here as they are excluded) When her threats and warnings of retaliation fail, she will reach for her inner Thatcher and invoke the voice of the British people.

Can we all intone together: Not in my name…

But why should we buy into her duplicitous agenda? She has throughout treated us with contempt and I’m tired of wringing our hands and MSPs running to the media to complain. This is political opportunism on a grand scale and whatever we vote in Scotland, she will ignore it. After all she already has.

If the SNP win handsomely again it will be the fifth election in succession won by the party from 2007 onwards. They have had an overall majority at Holyrood of their own and today have a pro-independence total. In 2015 they wiped the floor with the Unionist parties in the UK election. Before devolution the election of a majority of Nationalist MPs was taken as the benchmark for a mandate to split the UK and set up a separate state. In fact in 2015 they got 56 out of 59. It now seems probable in addition they will claim overall victory in the council elections next month.

Does there not come a point when the consistent level of electoral success marks more than a generalised approval for a party and turns into an effective mandate for its key objective? It’s the Unionist themselves who continually warn the SNP is really about independence – forget all the other policies, only one counts, they say. So are we being played for fools by hoisting ourselves on a referendum? It gives all the power to our opponents who won’t devolve the general powers to stage one and neither will they grant the one-off authority. You couldn’t have a clearer contradiction of democracy given the level of mandate Yes has commanded for a decade.

Now the SNP did say a vote for them in 2015 wasn’t a vote for a second referendum, it’s true. But I begin to wonder if, based on those relentless electoral successes – the very definition of democratic mandates – the demand should go beyond a referendum and instead be a call for full independence.

The 2014 referendum set the precedent of course, so there is a logic to that continuing to form the process we follow. But the Great Democrat in Downing Street has denied us that chance, at least until it’s too late and we depart the EU. An enhanced mandate will reinforce her will upon us. We will be mute, our hands tied, our will frustrated while she engineers the downgrade of our economy and closes down open access to our European neighbours. This generation of Tories have engaged in an act of national self-harm and done so for internal expediency. They lied their way through the referendum. They have turned widespread concerns about Europe’s political direction into an out-at-all-costs imperative. Xenophobia is now a familiar media riff. Families are being deported as I write – people disappeared for not having the right papers. Sound familiar?

Do Scots continue to beg for ‘permission’ to ask our own people if this is acceptable or would we rather find a home of our own inside the EU? In the face of Tory chicanery, I lack the respect for them and their process to keep on seeking their approval for a democratic right. I lack the sense of inferiority to treat them like masters who know best. They ignore our election victories, even when the results are filling their revered green benches. They dismiss our request for an escape route.

Shouldn’t we bypass the failed referendum route and upgrade our demand?

The delicate, softly-softly approach is terribly correct and I know that’s how the world of diplomacy likes it but there is now a listening ear in Brussels which was once deaf. If it hears a clear demand from a duly elected parliament in part of a member state being ignored – again – is not the basis of the EU, as a guarantor of democracy, challenged? In fact do the normal protocols which dictate non-interference in the affairs of a state – as in Catalonia/ Spain – still apply? In our case it is the continuance of membership which is threatened by the Brexit vote, something that does not apply in Spain or another member state. Can the EU really stand by and watch long-time members who have expressed a wish to stay, lose their European citizenship and get pushed out against their will? Whatever the diplomatic niceties, I suggest the image of the EU would be tarnished.

It’s clear to me that May will not relent on a free vote and will use her greater majority in June to crush it. Do we stand by and allow our argument to be flattened by those who are no respecters of democracy?

EU vetoes report on the ‘consequences’ of independence