See these two important quotes below, from the full UCAS report. A retired professor, with time on his hands clearly, read the whole thing and found a pretty obvious problem in comparing the two countries – the UCAS report makes it clear that it’s not a valid comparison. ‘It’s all right for him! We’ve got a job to do.’ says the editor of BBC Reporting Scotland.

First, the headline which found its way into all the TV and press reports before being parroted by opposition politicians as proof of failure. ‘The application rates from the most disadvantaged areas were 22 per cent in England, 24 per cent in Northern Ireland, 16 per cent in Scotland, and 20 per cent in Wales.’ (UCAS, 2016)

However, also in the report, in the summary for those with less time on their hands, there was this critical qualification:

‘In Scotland there is a substantial section of provision that is not included in UCAS figures. This is mostly full-time higher education provided in further education colleges which represents around one third of young full-time undergraduate study in Scotland. Consequently, for Scotland, this report reflects the trends in applications that are recruited through UCAS and not, as elsewhere in the UK, full-time undergraduate study in general. ’ (UCAS, 2016)

Reporting Scotland, on Friday 27th May, did go on to give a more full account of the problems in comparing the two systems but by then the damage had been done by the opening headline: ‘Scotland lags behind England in the push to get younger people from poorer backgrounds to university.’

This 16% is a percentage of those who go directly to university. The other ‘one third’ represents those going to local FE colleges for HNC, HND or other ‘sub-degree’ courses with direct-entry arrangements allowing them to enter university, bypassing the UCAS figures. Of course if only 16% of this group come from disadvantaged areas, then it would still be 16% overall and thus no better. However, this seems unlikely given the considerable economic savings for those attending local colleges.

As I was researching for this, I found a very convincing report in September 2015, which does much of the work for me, on the very impressive ‘Adventures in Evidence’ written by Lucy Blackburn. ‘Evidence’, I like it! Here’s a quite large, selective, extract from the report titled ‘UCAS figures – comparing figures for disadvantaged students from Scotland and the rest of the UK’:

‘The problem is that there is rather less sub-degree HE in the non-Scottish parts of the UK than in Scotland but most of what there is appears to be recruited through UCAS; meanwhile in Scotland  there’s a much larger amount of HE provided in FE colleges, pretty much all at sub-degree level, which is not recruited through UCAS at all…. Indeed, it’s the HE provided in colleges which gives Scotland the edge in overall participation rates…..So to use UCAS data to compare the percentage of disadvantaged young people recruited onto degree-level courses you ought to take a little bit off both sets of figures as in both nations whatever sub-degree provision  is recruited through UCAS is likely to be biased towards the most disadvantaged.  How much should be deducted unfortunately would be a complete guess from the available data.  But there is still likely to be a large gap between the two nations for disadvantaged students – there just isn’t enough sub-degree level activity in England to make that much difference. However, to compare the percentage of disadvantaged young people in any form of HE you need to adjust the Scottish figure upwards significantly. The gap would probably disappear completely – Scotland might even do better than England.

Here’s another thing with comparative studies of this kind, right-off, it can’t be done……at least not in a way that everyone will agree is definitive or remotely true. Even if you could fill in the missing Scottish data on all the students who bypassed UCAS and went to local colleges, it’s still too complicated. There are too many variables I can think of. There are more, I’m sure, which I can’t think of. For example, you just can’t, meaningfully, compare two countries with such differing population sizes, histories, cultures, geography, economics and education systems. What if, for example, the differences in the UCAS figures were down to a combination of more immigration of minority groups, motivated to sacrifice, to push and to support their children more, in England and a residual, Calvinist or Catholic, fear of debt, in Scotland? I’m not seriously offering these as the answer, but the first is kind of echoed below by an English professor and by some evidence from the Scottish Government. I’m really using these ‘unknowables’ to reinforce the need for extreme caution in making comparisons between one country and another. 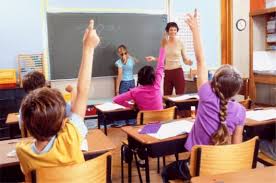 If you were to have a real go at this, empirically, the key would be to find out just how big the ‘substantial’ number not in the UCAS figures is, for Scotland and, crucially, how many of them come from disadvantaged areas. UCAS notes: ‘for the most part, demand for HE in further education colleges in Scotland is not recorded.’ These are the students applying to FE colleges for HNC, HND and other ‘sub-degree’ programmes where there is a direct-entry arrangement, from FE, into 1st, 2nd or 3rd year degree programmes in a university. Based on my own experience, I know that direct-entry students can make up the larger part of some cohorts in new universities.

Of course, the real stories, ignored by our media, were these, from UCAS again:

‘Scotland is the only country in the UK to have seen increases in student entrants from all domiciles.’ (UCAS, 2016)

Look at the last two lines there and wonder why Scottish mainstream media couldn’t use these for their headlines. What we got instead was the opening headline with the largely invalid comparison, used to pressurize SNP ministers. Perhaps the most dramatic piece of misrepresentation for naked ideological purposes (free tuition fees don’t work), appeared in the New Statesman on 3rd May and was repeated across social media by Tory and Labour supporters.

‘Scotland is by far the worst country in the UK to be a disadvantaged student. The richest Scottish students are 3.53 times more likely to enter university aged 18 (or younger) via UCAS than the poorest ones, compared with 2.58 in Northern Ireland, 2.56 in Wales and 2.52 in England. Fewer than one in ten young people from the most disadvantaged areas begin to study towards a degree by the age of 20. And the problems are actually getting worse: just 8.4 per cent of entrants to Scotland’s elite universities came from the poorest communities in 2014/15, down from 8.8 per cent the previous year.’ (Wigmore, New Statesman, 3rd May 2016)

The New Statesman Cricket Correspondent (usually) and SNP-basher (often), Tim Wigmore, might have been well-advised to say nothing such is his lack of understanding or care.

An earlier but different take on the figures, from that of the cricket correspondent, came from Dr Danny Dorling.  Dorling is Professor of Geography at the University of Oxford but, I guess, not a big influence on Tim Wigmore when he was there. He wrote this in Times Higher:

‘In contrast to England, Scotland shows what a real narrowing of inequalities would look like. There, the most dramatic change has been in the proportion of children from the most disadvantaged quintile of areas going to the highest tariff universities.’ (THE, 4th February 2016)

Here’s compelling evidence of this from the 2015 UCAS End of Cycle Report (ref below, page 90): 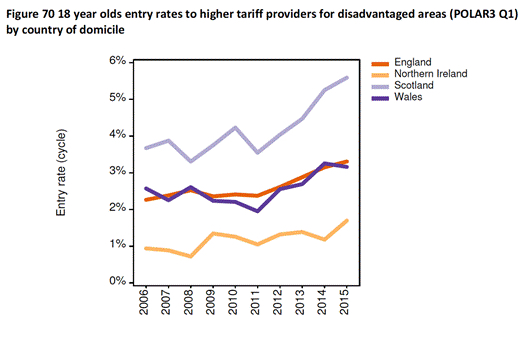 ‘We could speculate that many young people from the rest of the EU – especially the poorer parts – have calculated that they will never earn enough to have to repay the loans (to which they are as entitled as domestic students).’

Further evidence for this idea can perhaps be seen in these Scottish data, from a Scottish Government report on the Evidence of Sectarianism (2015), revealing the possible effects of aspirational parenting and financial support among minority and immigrant groups.

The report revealed that relatively recent arrivals in Scotland (not 19th and early 20th Century Irish Holocaust refugees) such as Jews (48%), Hindus (52%), Muslims (34%) and Sikhs (33%) are actually much more strongly represented in the more affluent, managerial, directorial and professional, sectors of Scottish society and economy than are the Secular (25%), Protestant (24%) or Catholic (23%) groups. I am a confirmed secular atheist dudist, thank God, so I’m relieved to see that we’re beating those Christians on this, if only by 1%. Here it is again, in case you had forgotten, the real headlines we should have heard:

Prof Dorling also sent me a more general piece he has written, titled ‘Sons and Daughters’, (ref below) which also suggests a more positive view of the Scottish system. It demonstrates strong performance, relative to the English, Wales and Northern Ireland system, for both Scottish schools and HE. 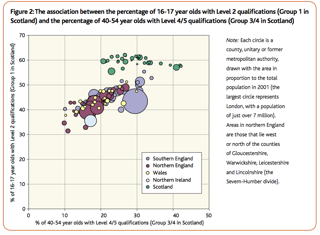 Just as you should only compare your personal progress with yourself as you were before, you should never compare yourself to others. That way depression and madness lies. However, at the collective level (Scotland), it’s clear from all of the above, that we should certainly not allow our mainstream media to mislead us into feelings of some kind of failure, for ideological (Unionist/SNP-bashing) purposes.

It’s a very old story this – complex research data is simplified or misrepresented with potentially damaging consequences. In this at least partially democratic society, we really are entitled to better.

Note: This article was updated on Monday, May 31, to include a Dorling graph and a BBC News link.