It is Saturday morning 16th April.  In just under 19 days until Scotland goes to the polls in an election that could see the end of the Union within five years.  That being the case you would expect some comment on this potentially Westminster breaking vote in the big four national papers.

Sadly you will look in vain.

Saturday’s Times you got a free Kings and Queens of England wall chart to help you understand the forth coming royal nuptials.  In the Independent they were running a story about the growing support for the Yes2AV campaign.  The Gruaniad had a leading article on a gay kiss-in protest outside a pub in London while the Telegraph was all concerned about George Michael’s song for the Royal Wedding.

How about the politics sections?  Independent, nothing.  The same in all the other ‘national’ papers.  The mainstream media are so encapsulated in the Westminster bubble that clearly they do not see the potential trouble ahead if the SNP gain another term.  I presume it is because the off the record briefings have told them that Cameron’s amendment bill will kill the SNP off, for certain this time.

There is a clear picture that the Westminster machine and its hangers on are so wrapped up in their belief in the supremacy of London that this pretendy election to Holyrood does not really matter on the big British stage.  The media is still peddling the idea that Labour are in a bit of trouble in Scotland but there is no worry because they will be returned as the biggest party come May 5th.

Even when the classic establishment ploy of putting Alex Salmond in a BBC Question time program in England to ‘humble him’ backfires there remains this mind-boggling complacency.   There is a subliminal message from the establishment that the Scots may toy with the idea of an SNP vote but they will see sense in the end.  There is only one word to describe what is going on at present in the Westminster bubble and that is complacency.

It struck me strange that Saturday’s Herald ran a piece by Rab McNeil which referred to the ‘always voted Labour, man and boy’ vote as the ‘stupid vote’ and highlighted Fudd’s cowardice in the face of protest at Glasgow Labour’s cuts to disabled services and his whining because Wee Eck agreed to meet them so he ‘wisnae ambushed’ like brave Sir Iain.

Yet still there is no one in the main stream media who is starting to say the unthinkable, the serious ‘What if?’  A second term for the SNP will mean the end of the Union.

The impact on England and the rump Westminster Parliament of a Scottish exit are not being discussed by the pundits in any shape or form.  It is almost as if they are frightened to because in doing so they will let the very genie out of the bottle they are steadfastly trying to ignore.   They have bought their own too wee, too stupid, too poor propaganda as the truth and repeat it, not because there is any truth in the conjecture but because it makes them feel safe.

Ultimately the only way they can sustain their own propaganda is to peddle stories that support their view of the truth or wheel out ‘experts’ like the Scottish CBI stooge, McMillian, to tell the good people of Toryshire; “Salmond is lying and that Scotland needs to build nuclear plants or it will have to import power from England.”   They completely ignore the reality that Scotland’s nuclear plants are needed to keep the lights on in the North of England and Northern Ireland and that reopening Hunterston and Cockenzie coal plants would easily replace the closure of nuclear Hunterston and Torness at little real cost – except to the North of England and Northern Ireland who would have to source their additional needs elsewhere.

So why are the UK’s national pundits choosing to ignore the giant elephant sitting in the room on England’s northern border?

It is almost as if they think if they do not believe in the SNP and Scottish autonomy – it will die, just like the fairies in a pantomime production of ‘Peter Pan’.  In doing so they miss J M Barrie’s point completely – if enough people believe in fairies, desires and a wish for independence; the idea will never die.

They see Salmond as Captain Hook and Cameron’s amendment bill as the crocodile.  Yet for those of us who believe in ‘independence fairies’ the story takes a different view point that Cameron is Captain Hook, Nick Clegg is ‘Smee’ but the crocodile that will do for them is the same beast and they all live in a ‘Never-never Land’ called Westminster.

After May the 5th we will discover which story is the correct one.  I hope the crocodile’s clock is ticking for Cameron.{jcomments on} 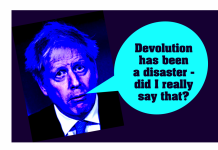