by Ben O’Neill in Australia

These days, explicit arguments in favor of fascism and the ideology of unlimited state power are, how shall I put this, ineffective at convincing the masses. Though people still adore the fascist ideology of the boundless power of the state and its fusion of public and private business, this is only so long as it is not given its proper name. These days, people prefer their fascism to be cloaked in disingenuous and deceptive language that disguises its true nature. All those old slogans about the supreme state and the suppression of the individual to the collective are so early 20th century! Far better to have your leaders pay lip service to “freedom” and “human rights” as they coercively mold you into a docile little manikin fit for their desired bureaucratic utopia. 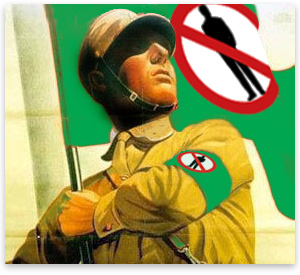 Of course, every so often, a modern fascist movement develops such a degree of hubris that it decides to dispense with all the euphemisms and denials and openly display the coercive means underlying its ambitions. After all, surely the poor rubes in the population must have figured it out anyway! Why not just level with them for a moment and have a little chuckle?

For those of you that haven’t already heard, the ecofascist movement is currently having a bit of a heart-to-heart with the population of this kind, and they are letting us have a quick peek at the ol’ mailed fist under the velvet glove. You see, having achieved all of this wonderful “consensus,” they are now ready to drop the mask a little bit, and have a bit of a giggle about the fact that, well yeah, they really are a pretty violent bunch.

Exhibit A: The “No Pressure” Short Film

The new ecofascist short film “No Pressure” created by director Richard Curtis for the 10:10 “carbon reduction” campaign is a beautiful example of the environmentalist movement dropping its pleasant-looking mask and joking about its true authoritarian nature. The film shows several sketches in which supporters of an environmental program to cut carbon-dioxide emissions explode people into a bloody mess when they decline to participate. After telling their hapless targets that there is “no pressure” to take part, the environmental organizers press a magic button, and presto, another dissenter liquidated — literally. The film ends, having murdered eight people (including two children) in four separate sketches, with these ominous words:

The video, which (of course) was funded with money stolen from British taxpayers, has now been removed from its previous home by its creators after some members of the public found the “joke” to be offensive. But the real joke is on the environmentalist movement. The ecofascists are learning the hard way that people do not like to be confronted by the realities of coercion in modern authoritarian ideologies. They want their fascism with nice cuddly slogans, and plenty of euphemisms. Jokes about killing dissenters, it turns out, are only funny when you are not actually touting an authoritarian ideology that uses coercion as its central tool.

Exhibit B: The Greenpeace Skinhead-Thug-in-Training Video

Here is another ecofascist advertisement, this time created by those cuddly loveable fascists at Greenpeace. The video shows an angry and menacing child, dressed up and lighted to look like a young hooded skinhead thug, as he angrily lists a litany of alleged environmental outcomes that will destroy his future, if adults fail to act. After going through the litany of environmentalist propaganda, he tells us, in a menacing tone and with plenty of scowling looks,

[W]e’re not just talking about the future. We’re talking about my future. But this is no surprise. You adults have known about this for years. And though you could have done something about it, you haven’t. You can say “It’s not my problem”; you can say “I won’t be around in fifty years”; but from now on, you can’t say “I didn’t know.” Starting today, the lines are drawn: you have to choose sides. Either you’re for my future, or you’re against it. You’re a friend, or you’re an enemy. I may just be a kid today, but tomorrow will be different. This is the last time I’ll be talking to you adults. You had your chance to fix this problem, now we have ours. We won’t be cute, we won’t be patronized, we will not be denied our future.

But I guess that would be patronizing, and according to the video, this young man will not be patronized. Oh yes, and in case you didn’t quite understand the thinly veiled message, he may just be a kid today, but tomorrow, he will be a full-grown ecofascist hoodie-wearing skinhead thug, and you, dear viewer, will be his enemy.

Some more ecofascist propaganda, this time designed directly for young children. The Planet Slayer game features, among other things, a cartoon pig game used to calculate carbon-dioxide emissions. It helpfully informs children when they should die in order to ensure they do not use more than their “fair share” of the planet. Other helpful information for children includes some harsh words against “cultural imperialism” (i.e., the free choice of people in other countries to adopt certain products and practices from Western countries) and this helpful instruction: “Organise and socialise comrades. Together we can save the world!” 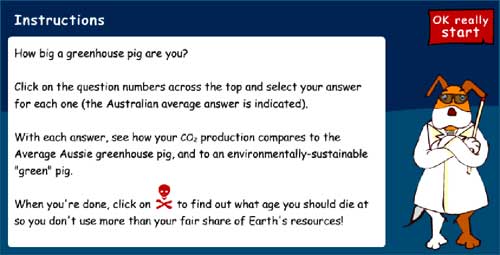 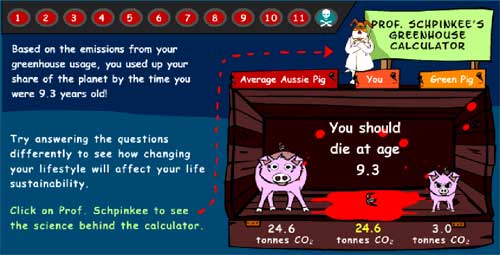 Like other pieces of ecofascist propaganda, this one was also funded with taxpayer loot, and is also recommended for primary-school teaching by several government education departments. It has now been taken down from its previous home at the government media provider after some parents found its content, hmmm, how shall we put it, less educational than was intended. Again, jokes about exploding children (even in pig form) are only funny when you are not actually touting an authoritarian ideology.

There are plenty of other examples that could be given, though the three present exhibits are probably the most egregious in recent memory. For some reason, they do not make me feel any more inclined to cut my carbon-dioxide emissions or save the world from loggers and nuclear power plants. Nonetheless, all three of these pieces of ecofascist propaganda have something to recommend themselves: they all accurately represent the true nature of the environmentalist movement and draw attention to its love of violence to achieve its aims, even if sometimes in an allegedly light-hearted manner.

It seems that environmentalists are forgetting the lessons of George Orwell, who tells us,

[P]olitical speech and writing are largely the defense of the indefensible. [Brutal policies] can indeed be defended, but only by arguments which are too brutal for most people to face, and which do not square with the professed aims of the political parties. Thus political language has to consist largely of euphemism, question-begging and sheer cloudy vagueness.

Indeed, it is precisely this kind of euphemism and cloudy vagueness that most people adore when they are being presented with state-sponsored schemes to save us from all our ills and perils. It is smiley-face fascism they want, and they find it rather tactless to speak about all that nasty coercion stuff that goes along with it.

So don’t be offended by these videos, advertisements, and games. Be thankful — thankful that the environmentalist movement is now ready to show us what it really thinks, stripped of all its pleasant euphemisms and ambiguity. Be thankful that they are ready to have a little joke at their own expense and press their own magic red button. Kaboom!