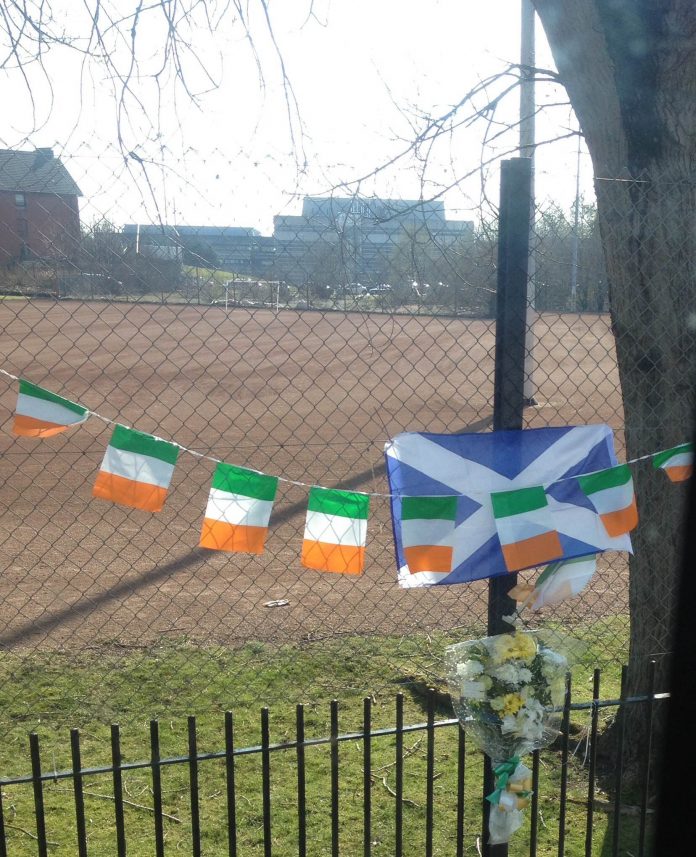 As Ireland marks the centenary of the Easter Rising, Cee Smith reflects on Glasgow’s conflicted relationship with Irishness

Like a great number of Glaswegians I have some Irish in me.

My great grandmother came here from Donegal, making me one sixteenth Irish to be exact.

So I was fascinated when I read in a history book in my teens, that every ‘Scot’ was in fact Irish. The word originating from the Scotti Tribe, Irish settlers who would eventually aid in converting the country to Christianity.

While I later learnt it might not be strictly true, I was eager to share this piece of knowledge and dropped it into a conversation about ‘the Irish’ at school.

It was not received well.

It was an early introduction to sectarianism. And one I continued to argue against with general history.

The Pope, after all, blessed the ‘Protestant’ side before the Battle of the Boyne.

It wasn’t easy-going for a ‘Catholic looking’ agnostic at my non-denominational school.

I had escaped the old firm side of it until word got around I was a Celtic fan too.

I should ‘go back to my own country’.

So I read Cat Boyd’s article in the National earlier this month with interest, as she called for Glasgow to celebrate its Irish heritage without being dragged into bigotry.

But I wondered how any conversation on Irish heritage can happen without looking at religion.

After its conversion to Christianity, Scotland was a Catholic country until the reformation in the 16th Century.

Look around the city and you will notice some of the scars this change left in the architecture. Empty spaces where statues of saints once resided. Scratched off inscriptions.

On my way into the city I pass the statue of John Knox, the man most influential in recreating Scottish religious identity, looking like a tall subbuteo player on his pedestal over the city.

Change in religion, comes change in attitudes and moral ideas.

The Easter services are a reminder of the time when religion was at the heart of everyday life. It is a collective trigger for the emotions of the year. A community build around stories of shared identity.

When Catholicism is seen to have returned to Glasgow with the influx of Irish migrants in the 19th century, it was seen as a threat to this safe community. They established strong communities of their own.

But the Irish ‘invaders’ this time weren’t looking to colonise and convert like the Scotti may have done before them. These were refugees of famine and war. Years of uncertainty as their country had become a playing ground for political power.

It is here we find the history of the separation of faith and football too, with the founding of Celtic FC by an Irish priest for those migrants to socialise safely, and the later Protestant reaction at Rangers.

While many fans would no longer claim any religious faith, both sides are guilty of holding this religious and national identity sacred. Songs from the Troubles sung by fans too young to know the meaning behind the words. Copying the older generations, the hate is passed down while the history fades from memory.

Bigotry does not go away by ignoring it, as Boyd rightly points out. But neither does it vanish with parades for all sides.

If Boyd wants to see our Irish heritage celebrated, I support her. I will always support anything that offers any insight into our own history.

But let’s keep it away from St Patrick’s Day. A religious holiday and one that has been turned into stereotyping for profit. An excuse to binge.

Rather, why not take after the Mela festival she also mentions. A celebration of diversity, not religious divides. Multiculturalism and the sharing of ideas.

We are, above all, fellow human beings. Perhaps the time has come to stop holding onto our perceived identities and celebrate the differences in opinion and belief among us.

The best way to start that is to educate ourselves in our history. To see that so many of these differences come from mere circumstance many years ago.

By understanding where it is coming from, learning from our past, we can move confidently into the future.

McCoist apology: What does this tell us about the BBC?