I attended the launch of the 2016 Festival programme on behalf of Newsnet Scotland. Fergus Linehan is in his second year as director, and as he said ” the second album is always the difficult one “.

As readers of Newsnet Scotland will know  I have been critical of the previous festival director Jonathan Mills not only for his programming but his apparent lack of interest in Scottish culture. He kept saying ” this is an international festival” and I kept pointing out that the Festival mission statement said: “To present the best of Scottish culture to the world”. Well ,Mills has gone and Linehan took over last year and made a reasonable first programme. Fergus isn’t Scots ( there has still never been a Scottish director in the 70 years of the Festival)  but he knows Edinburgh well and is familiar with Scottish culture.

The good news is that his second programme has a brilliant classical music programme with many of the top orchestras, conductors and musicians in the world coming to Edinburgh.My theatrical friends tell me it’s an interesting theatre programme featuring several Shakespeare plays to mark the 400th anniversary of the Bard and some Scottish plays although why the National Theatre of Scotland has to collaborate with a company in New York to make a play about Scotland I’m not sure! I do remember the Burns bicentenary and asking Mr Mills how he planned to celebrate it and he said ” I don’t, everyone else is doing Burns and we aren’t”! A strange answer but then Mr Mills really wasn’t interested in Scottish culture !

There are also  good dance and pop and folk music sections in the programme which do have a lot of Scottish bands and singers. It’s  worth also mentioning a show about James Connolly a little known son of Edinburgh and one of the leaders of the Easter Rising of 1916 in Ireland. This show is being sponsored by the Edinburgh trade union movement including my union the NUJ.

I praised Fergus for the programme overall but made some criticism , because I said it is the job of the critic to be critical!  Firstly I pointed out that despite the great programme and fine musicians there were no Scottish composers in any 50 or so concerts! He looked quite surprised at that and said clearly it was an omission, there are of course many fine Scottish composers, both in the past and composing today, like the recently departed Peter Maxwell Davies, or James Macmillan who seems to be premiering his works all over Britain but not at Edinburgh! Fergus said he hopes to rectify the situation next year.

Secondly I questioned the thin nature of the opera programme, with only two staged operas Norma with Cecillia Bartoli and Cosi Fan Tutte  from Aix, and one concert opera although it is Wagner’s Das Rheingold with the Mariinsky conducted by Gergiev. Indeed Fergus said he hopes to complete a whole Ring Cycle over the next 4 years, the Wagner lovers ( and yes they are obsessive!) will be flocking to Edinburgh! Fergus rightly said that opera was an expensive art form and money was tight this year but he hopes to improve in future years.Brian Macmaster a previous director used to program up to 10 operas and used Scottish Opera regularly who are missing from this years programme.Fergus said he was working with Scottish Opera on future projects.

I was also critical of his pricing policy for Norma with prices beginning at £30 and going up to £140,I told him that I regularly went to the best opera in the world at Covent Garden for £10-15 and that Edinburgh was known for its reasonable ticket prices. Fergus said he would reserve day tickets at low prices.There has been a gradual price rise this year and the discounts for students and pensioners have gone down to 30% from 50% but I am aware that all arts budgets are under pressure and Scotland has suffered far less from cuts than England.

A recent report showed the creative industries in Scotland employ more people than the oil and gas industry and, as part of tourism, are Scotland’s biggest industry. More than 250,000 people come to the Edinburgh Festival every year generating more than £200m in revenue for the Scottish economy yet culture costs less than one percent of the Scottish governments budget.Of course there is private sponsorship too but this can raise problems as the recent ending of links between the festival and BP have shown. BP have been a major sponsor in the past but last year there were protests against BP, some of them from  participants. So whether the festival pushed them or they were cutting back, we don’t know at present, but they have gone. Fergus said without large private donors like the Dunard fund the festival would be in danger, however it is also correct that we have to ask questions about where private donations come from.

So the good news is the Edinburgh International Festival is heading towards its 70th birthday in good health and with a director who unlike his predecessor is willing to listen and to take criticism. He also has a sense of fun. When he launched the programme at the Festival Theatre he invited us all on to the stage for drinks.I will be attending my 50th festival in August and it remains the greatest in the world, in one of the finest cities in the world. I hope to see you there!

(Hugh Kerr was an MEP in charge of music policy on the Culture Committee of the European Parliament and has written widely on culture and politics. He will be attending his 50th Edinburgh Festival in August)

Cox murder a tragic conclusion to an ugly referendum campaign 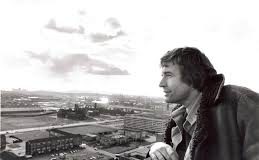 William McIlvanney: a personal tribute from a fellow academy boy