As Mervyn King at the Bank of England continues a policy of devaluing the British pound the price of gold in pounds is rocketing. This has lead to a sharp increase in demand for owning physical gold.

With a sharp fall in the tax-base caused by Britain’s financial crisis, quantative easing – also known as money printing – is surging past the £200 Billion mark.

Money printing causes the pound in your pocket to be devalued as you can afford less imported goods or products manufactured in the UK with foreign-sourced materials and/or components. Quantative easing is effectively a tax on the citizens’ wealth who become poorer as their purchasing power diminishes.

The dramatic fall in confidence in Britain’s currency is causing investors to flock to gold, traditionally seen as a hedge against currency volatility and collapse. In the last year alone sterling has lost over 30% of its value against gold.

Gold and Silver are hedges against currency devaluation. This is because as ‘fiat currency’ (currency backed by government guarantee) like the pound is devalued by the printing press, gold and silver are finite – you can’t print precious metals. Gold has held its value for thousands of years while paper currencies have come and gone.

As the Western economies face a debt crisis Britain and the US lead the way in currency devaluation. Emerging markets like China own a lot of UK and US sovereign debt. Since the financial crisis began Western governments have suffered a drop in tax income and so deficits are climbing and debt repayments are consuming a greater percentage of government expenditure.

While governments need to borrow more money to plug the hole in their budgets observers believe that the US, UK and others are simply printing money to repay those loans. This is called ‘debt monetisation’ and angers those investors who bought government debt in good faith.

The consequence of such a policy is that investors will leave the bond market.  Commentators suggest that it is now the Bank of England which is mostly buying Britain’s bonds, or working in tandem with the US as both nations print money and buy each others’ bonds. International economists and investors like Marc Faber warn that this policy will lead to hyper-inflation. 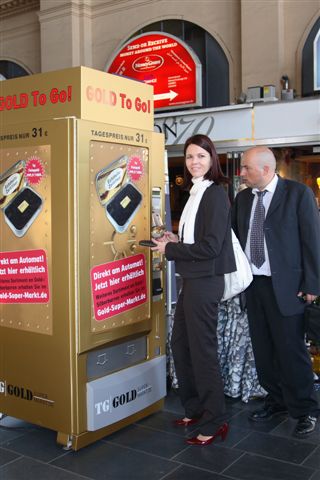 Demand for the yellow metal will see Britain’s first gold vending machine in Harrods next month. There are now 9 machines in Germany with 1 opening today in a luxury shopping centre in Berlin. Germans are acutely aware of the effects of hyper-inflation since their currency collapse in the 30s and people had to carry cash around in wheel-barrows.

Another way to look at it is that it is not the price of gold going up in pounds but pounds losing value against gold. Five years ago £260 bought an ounce of gold whereas today you will need £845 to buy the same ounce.

Scottish businesses are deeply troubled by Westminster’s policy of currency devaluation. Buying from abroad is becoming a lot more expensive at a time when consumers have stopped spending. Britain’s consumers can not afford more debt while credit from banks has receded sharply.

As the Holyrood elections near the SNP will argue that Scottish business would be better off in an independent Scotland with North Sea oil revenues stabilising public finances. News that Norway’s oil fund reached $513 Billion dollars will be pointed to by SNP leaders as evidence that independence offers economic security and growth at a time when Britain has simultaneous sovereign debt, financial and currency crises.

Falling in love with songs that embrace break-ups and breakdowns