POLITICS…
Alex Salmond has set the UK Government and other Scottish Unionist politicians straight over the tax powers available to the Scottish Parliament.

In a public letter to the Scottish Secretary Michael Moore, Mr Salmond has responded to a series of inaccurate claims about the future of the 3p tax power that the SNP has always insisted is an unfair and regressive tax.

Mr Salmond’s rebuke follows a number of sensationalist headlines and broadcasts from Scotland’s main stream media outlets over the apparent ‘loss’ of tax powers that had never been used and are soon to be obsolete.

Mr Salmond points to major inaccuracies and omissions in Michael Moore’s leaked letter and challenges the Lib Dem MP to explain the costs of the Calman proposals to Scotland – costs that independent and respected economists have argued would seriously damage Scotland’s economy.

Describing Mr Moore’s letter as a “travesty” of the true position Mr Salmond explained that the Scottish Government, despite seeking information three years ago on the implications of an IT upgrade, were only presented with a demand for £7 million in the summer of this year.

Mr Salmond also pointed out that, contrary to Moore’s claim that costs of the upgrade should be met by devolved administrations, the costs of such decisions should in fact have been met by the UK department driving the change, citing the following paragraph from the UK Treasury’s own funding policy document:

“Where decisions of United Kingdom departments or agencies lead to additional costs for any of the devolved administrations, where other arrangements do not exist automatically to adjust for such extra costs, the body whose decision leads to the additional cost will meet that cost.”

The revelation that IT systems are not capable of coping with changes to Scottish income tax rates were headlined by most major news outlets in Scotland.

The Herald:
Fury as Scotland loses its tax-raising powers
http://www.heraldscotland.com/news/politics/fury-as-scotland-loses-its-tax-raising-powers-1.1069433?localLinksEnabled=false

Michael Russell MSP, described the first Minister’s letter as: “A wonderful and blunt riposte to the nonsense reported yesterday and to the hysterical outbursts from the usual over the top unionist suspects. Who ever heard of a nation paying another one for the privilege of using our own resources ?”

At the time of writing it is not known if the Scottish media will give the same high profile coverage to the First Minister’s letter as it did to Michael Moore’s letter.

Mr Salmond’s letter to Michael Moore is reproduced below:

Your letter of 18 November about the Scottish variable rate of income tax (SVR) is a travesty of the position.  The reality is as follows.

The then Scottish Executive paid the UK Government £12 million in 2000 to add SVR functionality to Her Majesty’s Revenue and Customs (HMRC) tax collection systems.  Thereafter, an annual fee of £50,000 was paid.

HMRC said in 2007 that additional work was needed to maintain the readiness of the IT system, and in summer 2008 made clear that they would be installing a new IT platform.  Scottish Government officials attempted to elicit information on what this meant for Scotland and the functionality of the 3p tax power.

We were finally asked on 28 July this year to pay over the sum of £7 million to HMRC for this purpose.  Why nowhere in your letter did you mention this demand?

Anyone proposing paying this £7 million to HMRC would need to explain where the equivalent cuts would be made in Scottish public spending.

And even if we had paid it – at a time when Scotland is on the receiving end of massive cuts to our budget from your government – the SVR under the new system could not have been implemented until 2012/13: another key point which you failed to mention.

In any case, at that stage it seemed an academic debate because the SVR itself is set to be replaced under any version of the legislation which you intend to introduce in the next few weeks.

On 20 August, Scottish Government officials offered talks with HMRC on the issue of the SVR – an offer which has not been responded to.  The first we have heard from the UK government on the matter since 20 August is your letter of yesterday.

It is clearly unacceptable that Scotland should be asked to pay, again, for something which millions of pounds have previously been paid for.  If HMRC choose to replace their IT systems, that is clearly a matter for them.  However, anyone would expect them in specifying their new systems to replicate the functionality of the old.

No Scottish administration has used the 3p tax power, none of the main parties in Scotland advocate using it now, and it is intended to be overtaken by the Tory/Lib Dem Calman financial proposals – flawed measures which, had they been established for the start of the current spending review, would have resulted in the Scottish Budget being £900 million lower in 2009/10.

The real issue, therefore, would appear to be about the future.

You stated – as did Danny Alexander in his letter to me of 20 October this year about the Spending Review settlement – that: “it is an established principle that the costs of devolution should be met from the Scottish Budget.”

This is not the case – in fact, the opposite is true.

“Where decisions of United Kingdom departments or agencies lead to additional costs for any of the devolved administrations, where other arrangements do not exist automatically to adjust for such extra costs, the body whose decision leads to the additional cost will meet that cost.”

The clear impression can only be that your letter was not about the cost of financial powers that are going to be superseded, but rather about establishing a precedent for the Scottish Government paying to install and administer the Calman tax proposals – which unlike the SVR will require to be used every year.

Given the huge pressures on the Scottish public purse because of your government’s spending cuts – and the further threat to our budget from the Calman proposals themselves – we need answers to these key questions as a matter of urgency:

How much is the UK Government intending to ask the Scottish Government to pay for the Calman tax powers – measures which could reduce Scotland’s budget, as indicated above?

Exactly when would these financial powers be capable of being implemented?

A copy of this letter goes, like yours, to Annabel Goldie MSP, Iain Gray MSP, Margo MacDonald MSP, Tavish Scott MSP, Patrick Harvie MSP, and David Gauke MP, and also to the leaders of the Scottish parties at Westminster: Angus Robertson MP, Ann McKechin MP, and David Mundell MP.  I am also sending copies to John Swinney and Fiona Hyslop.

Given that you released your letter to the media, I am also releasing this. 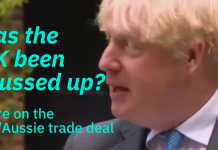 Has the UK been Trussed up?