The agreement – the first of its kind between a Scottish firm and a major state-owned Chinese offshore wind energy company – was announced following a formal signing ceremony in Shanghai.

The agreement – the first of its kind between a Scottish firm and a major state-owned Chinese offshore wind energy company – was announced following a formal signing ceremony in Shanghai.

Scottish Development International (SDI) has been working closely with SeaEnergy Renewables ahead of the Agreement – under which the two companies will develop a detailed business plan and commercial framework to develop and market turbine jacket substructures, towers and access systems. 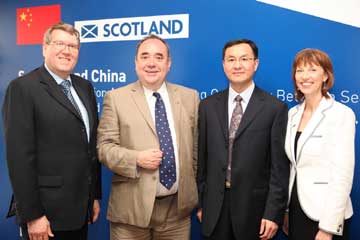 The FM said:
“I’m delighted that SeaEnergy Renewables and the Nantong COSCO Ship Steel Structure Company have embarked on this exciting and ambitious new venture. SeaEnergy’s expertise in delivering deep water offshore developments in the oil and gas industry puts it in a leading position at the vanguard of the rapidly expanding offshore renewables industry.

“The Agreement now signed with NCSC symbolises the strength and importance of partnership with China and underlines Scotland’s important role in helping the world to tackle climate change and to seize the opportunities of the low carbon economy.

“Scotland has unrivalled natural resources and established expertise in energy engineering, particularly offshore, providing a considerable market opportunity for wind energy technology and equipment providers, and for potential investors across the world.

“The Scottish Government, working with our enterprise agencies and SDI, is determined to support the development of clean energy technologies and committed to working with China in this sector. By harnessing just a third of the potential wind, wave and tidal resource off Scotland’s coast, by 2050 we could power Scotland seven times over – enabling us to become a massive exporter of clean, green energy, generating an estimated £14 billion in value and supporting around 60,000 jobs.”

SeaEnergy Renewables CEO Joel Staadecker said:
“We are delighted to be working with one of China’s premier state-owned enterprises and directing our efforts at the critical supply chain need for offshore structures. The combination of our proven skills in delivering offshore infrastructure and turbines in deeper water and NCSC’s expertise in design and manufacture of steel structures for marine applications provides the ideal platform to serve the growing global offshore wind industry as it moves into deeper waters.”

Wang Zhihua, General Manager of NCSC, said:
“The signing of this strategic cooperation agreement with SeaEnergy Renewables is an important milestone in NCSC’s expansion into the European Market. Partnership with SeaEnergy will combine NCSC’s fabrication infrastructure with SeaEnergy’s outstanding expertise in the offshore environment. Together both companies will be excellently positioned to move forward in this industry.”

Scottish Enterprise chief executive Lena Wilson said:
“The agreement between SeaEnergy and NCSC is a significant milestone in the growing business relationship between Scotland and China, and the development of both our nations’ offshore wind sectors. Some of Scotland’s biggest economic opportunities lie in the growth of a globally competitive industry based on our renewable and low carbon energy resources. SeaEnergy has displayed remarkable leadership and innovation in its approach to business relations with Chinese companies in both China and Scotland and SDI is committed to exploring further long-term Sino-Scottish partnerships in the renewables energy sector.”