THE Food Wars have begun. Oxfam is warning that the price of staple foods will more than double in the next 20 years unless action is taken to reform the global food system.  According to a new report by the charity, by 2030 the average cost of important crops will increase between 120 per cent and 180 per cent.

In January, the UN Food and Agriculture Organization (FAO) reported that world food prices had already reached a new high, surpassing the previous record in 2008, when there were riots in 30 countries because people could not afford to eat.

So far this year there have been food riots throughout North Africa, triggering the Arab Spring. In India, onion traders in Delhi’s main vegetable market went on strike in response to police raids on alleged hoarders. Unseasonal rains have cut onion production sharply, making the lowly vegetable as expensive as a mango.

The developed world is not immune: food inflation in Britain hit record levels at the end of 2010 – and that was with the big supermarkets discounting heavily. America will see double-digit food inflation this year.

What is causing the global food crisis?

Random bad weather is partly responsible, causing temporary shortages. The terrible flooding in Australia has added to the already exhorbitant export price of sugar. Fires and drought in Russia have wiped out nearly a third of the wheat crop.

But the new food crisis is the result of more than the normal fluctuation in the climate. This time the problem is structural.

Since the dawn of the industrial revolution, continuous productivity gains have ensured that global food production outpaced population growth, give or take the odd bout of bad weather. As a result, food costs have always declined in real terms.

But sometime in the first decade of the 21st century we entered a phase where agricultural productivity gains are unable to keep pace with demand. Meaning that real food costs are going to rise over the next 50 years.  By how much is open to debate – the UN estimates 30-50 percent.

Higher food prices spell political trouble. In the UK, they have pushed the CPI measure of inflation to over four per cent this year – this could force the Bank of England to raise interest rates later in the year. Rampant food inflation in China could also force Beijing to slam on the economic brakes. But a China that is not growing is a China that could seek to divert popular discontent with a bellicose foreign policy.

WHY FOOD PRICES ARE RISING

What caused this new food inflation? On the demand side, there are three pressures. First, more mouths to feed.  Tonight, there will be 200,000 additional people around the global dining room table, compared with yesterday. The current population of Earth is around seven billion souls. It will reach nine billion by 2050.

Second, affluent lifestyles. There are already three billion people in the developing world who want to eat themselves into obesity like Americans and Europeans. That involves stuffing cows (instead of people) with grain to produce meat and milk.

Third, biofuels for cars. US farmers harvested 416 million tons of grain in 2009, but 119 million tons of it went to produce ethanol fuel. That’s enough to feed 350 million people.

Even if we stop subsidising ethanol, the sheer scale of demand for extra foodstuffs is going to force real price rises over the next decades – regardless of any miracles in agricultural productivity. But it is on the supply side that costs have really shifted irrevocably.

First, the tap is dry. Even if GM crops allow us to work marginal land, or escape the ravages of disease, there is no way we can create more water for irrigation. The amount of water on planet Earth is finite. Yet half the world’s population lives in countries where water tables are falling because overpumping for agriculture is depleting natural aquifers.

Second, oil is expensive. High productivity agriculture relies on petroleum for machinery and making fertilizers. More than La Nina, it is the rise in oil prices back over the $90 dollar mark that is fuelling the recent global hike in food costs. Forget what you’ve read about futuristic, urban farms in disused factories. The heating bill will always be too prohibitive.

Rising food prices rather than famine will determine the history of the first half of the century. Which is why politicians have to put farming back on the agenda. However – here is the good news – rising prices contain a silver lining. They are a signal to governments, investors, entrepreneurs and inventors that they should get involved in expanding production. Here are two ways.

A third of the world’s scarce cereal crop is used to feed animals rather than hungry humans. This could rise to a half by 2050 as the carnivorous Chinese become more affluent. Doubtless, as meat prices increase, many Europeans will become vegetarians. But the higher cost of animal feed, allied to the prospect of making a fat profit from meat, will also induce producers to seek an alternative to stuffing their cows with grain. Recycled food waste would be an environment-friendly alternative.

Again, perhaps as much as half the food produced in the world today is lost, wasted or thrown away, due to inefficiencies in distribution and storage. Reduce that wastage significantly and much of the food problem would disappear. The way to achieve this is through better infrastructure, fairer taxes, less official corruption and an end to politically motivated price ceilings that rob the peasant farmer.

Since 2007, the SNP Government has made food security a priority. As a result, sales of Scottish agricultural produce have increased by 30 per cent in the past four years.

This this year Scotland has a brand new ‘super research institute’ to tackle the global food crisis.  The James Hutton Institute was launched in April at the Royal Society of Edinburgh.  It brings together the Macaulay Land Use Research Institute in Aberdeen and SCRI, Scotland’s world renowned centre for crop research and breeding, based at Invergowrie near Dundee.

The new research organisation employs more than 600 scientists, researchers and support staff, making it one of the biggest institutes of its type in Europe and a world leader in agricultural science.

Media critic writes in defence of the ‘totalitarian’ SNP government

Daily Mail gets it wrong…again

For the truth to be revealed, the SNP government needs only... 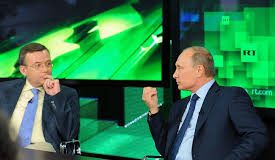