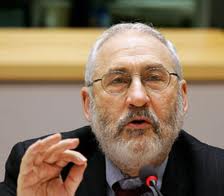 The news was broken dramatically by Alex Salmond in a rousing final speech to his party’s 1200 delegates on the last day of the SNP’s annual conference in Perth on Sunday.

Arguing that it was time for “fresh thinking” on the economy Salmond told his party members to rapturous applause:

“Conference I can tell you today that Joe Stiglitz has agreed to advise the Scottish Government on our country’s economic future. A Nobel prize winning economist backing Scotland.”

This development is a coup for Alex Salmond as he seeks to establish his government’s economic credibility with the electorate ahead of the Holyrood elections on May 6th next year.

The CEA which meets quarterly and offers recommedations to Scottish ministers was established by Alex Salmond in 2007 after the first ever SNP government was formed. Its members include world-renouned economists like Andrew Hughes Hallet but none of the Council’s advisors have the international profile of Stiglitz.

Joining the Scottish CEA, the former Bill Clinton aid has provided a boost for the SNP as they seek to overturn the Labour Party’s lead in Scottish opinion polls.

Jobs and the Economy will be key deciding factors in who forms the next Scottish Government.

As Scotland, according to GERS (Government Expenditure and Revenues Scotland) is in surplus, the SNP believes that economic independence is the best strategy for Scots at a time when the UK’s public finances are in crisis.

A recent opinion poll (1) shows that more than 80% of Scots believe that the present coalition and the previous Labour governments in London are responsible for the parlous state of Britain’s public finances.

The nationalists’ strategy will be to exploit these findings by presenting Salmond’s government in Edinburgh as more economically competent than governments at Westminster. SNP strategists will calculate that the CEA’s acquisition of Joseph Stiglitz will lend considerable weight to that case.

Confusing messages from Rennie and Moore as both target SNP

Scotland an Independent nation. To be or not to be?