Facebook
Twitter
Google+
Pinterest
WhatsApp
In the first of an occasional series of articles covering the Scottish fracking debate, chartered engineer John Low discusses the technical case in favour of the controversial industry. John specialises in water and utilities, and has worked as a consultant reservoir engineer in the oil and gas sector.
He asks us to note that his article concerns onshore shale gas extraction, not to be confused with coal seam gas extraction, which is common in the US and Australia, and was the subject of a seemingly abandoned plan located under the River Forth.

What does fracking actually involve?

Drill a well, pump down a mixture of water, sand, and a gelatine like substance (other stuff can be added to improve efficiency but not usually necessary).  Pressurise the fracking liquid to a high enough pressure to fracture the rock (perhaps 2000-3000 psi, which is comparable to a water filled fire extinguisher). 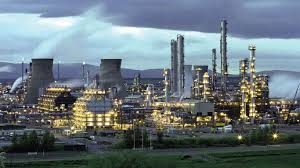 What then happens is a crack runs in two opposite directions from the well.  The crack, or fracture, is usually approximately 1-2m (3- 6 feet) high (i.e. along the line of the well, which can in fact be horizontal, vertical or anything in between), 1-2mm (maybe 1/16 inch) thick, and 70-100m (200-300 feet) long.  The water and sand mixture then fills the fracture.  The sand is to prevent the fracture from closing again – otherwise it would do so under the weight of a mile or so of rock above – and the gelatine stuff keeps the sand evenly distributed through the water, otherwise it would sink to the bottom and not work.  The liquids are then removed leaving the sand.

Why is it done?

To improve the flow rate of gas into the well.

Gas (and indeed oil) sits in the tiny spaces (called pores) between grains of a reservoir rock such as sandstone (just like the sandstone that most of Edinburgh, for example, is built from – have a look at a block with a magnifying glass, you should be able to see the individual grains of sand and the spaces between)

These pores are connected by basically overlapping each other so there is a continuous labyrinth of pores in the rock.  Think of it as like a hard sponge with tiny holes.  The gas is under a high pressure underground, so when a well is drilled into the rock, the oil & gas flows through the network of pores and into the well and up to the surface (there are ways to boost the pressure and get more out).

If there is a high shale (clay) content in the rock, the pores are even smaller and are not well connected.  If a well was drilled into that, then not a lot would happen, the gas would not flow (or would do incredibly slowly, think of geological time) through the rock into the well.

By hydraulically fracturing the rock, a much quicker pathway for the gas is created – it only has to go a short way to the fracture, then can move quickly along the fracture into the well (the injected sand is no obstacle).  Centuries become days, or even hours.

What about the groundwater?

The rocks containing the gas are typically (in the UK) many thousands of feet below the surface.  A mile or more, if you like.  Freshwater aquifers, or groundwater, are typically dozens to hundreds of feet below the surface.  The actual process of fracturing the rock could not reach the groundwater aquifers, as I said above they reach up to 100m, or say 300 feet, from the well on a good day – typically less.
Where there is a risk of something contaminating groundwater is if the steel and concrete lining of the well failed, and gas leaked out.  That would be at the stage of coming to the surface through the well, though, and not through the fracture itself, and the simple solution is not to drill through a water bearing aquifer.  The chances of this happening in any case are tiny, and drilling companies have a vast amount of experience out there in sealing wells properly (that stuff is valuable!).

However – in Scotland the public supply doesn’t usally come from groundwater anyway, except in a couple of localised areas (parts of Dumfriesshire and Kingussie/Aviemore, and some private supplies).  The simplest solution is to eliminate the risk by not drilling in those areas.

This can be controlled.  The act of fracking causes tremors in the ground, which can be detected.  It’s intuitively obvious that a bigger fracture will produce more gas, but will require a bigger fracturing pressure, creating a bigger tremor.

The solution is regulation, which would be done under the current planning permission system.  The recent proposal in Lancashire proposed a tremor limit of 0.5 on the Richter scale – that’s so low that it would be practically undetectable without measuring instruments. 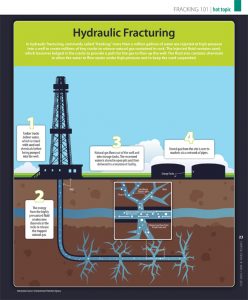 What about the environmental impact of a new source of gas?

That’s a different argument.  There would be no objections on these grounds to a new North Sea gas field opening up, for example.  In brief, gas is cleaner to burn than coal or oil, so using it as a substitute is an environmental benefit.

What are the downsides?

I’ve mentioned one or two potential issues and how they can be controlled.  The main downside really is that drilling and fracking is a big ugly industrial process that most people wouldn’t want in their back garden, although the surface operation can be some distance from the underground part, perhaps up to a mile or so because of horizontal drilling technology.

Once a well is drilled and fracked – that would take a few weeks – then the actual operation of the well would last a few years and would in fact be very discreet.  However, as you might imagine from the description above, the gas near the fracture would deplete after a while, and the stuff further away would take too long to reach the fracture – so a new well would be needed to keep supplies flowing.  Therefore in an onshore gas field, there would be a fairly regular process of drilling new wells.  The other issue is like most construction type work:  vehicle movements, which are subject to planning regulations.

So should we do it?

I think so, yes, under control and tight regulation.  No way would I support a free for all (which is where the USA tends to go, so they have a lot of problems), but our planning permission and environmental regulations should cover most of the issues and it would be be sensible to keep them under review.

The economic benefits of a new, local, source of relatively clean (compared to oil, coal etc.) energy and raw materials for some manufacturing would be considerable for Scotland.  As of course would be the tax revenue and employment opportunities.

And as we now seem to be heading for independence quicker than anyone had thought possible, we’re going to need all of that.

Fracking ‘ban’: A firm stand against the unacceptable, or gesture politics?

Unconventional Gas – Who are Dart Energy and is fracking on...