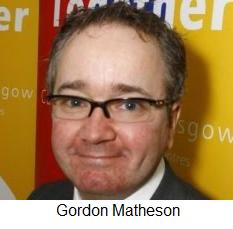 The Labour leader of Scotland’s largest local authority has been accused of breaking a pledge that there would be no compulsory redundancies after two workers were sacked by the City Council.

Glasgow Council’s Labour Leader Gordon Matheson had promised that no council staff would be given the boot this year. However, trade union Unison has revealed that two of its members had already been made redundant – the second was a man with cerebral palsy who was sacked on Christmas Eve.

Both men worked for the council’s land and environmental services department and Union leaders have accused Mr Matheson of failing to protect jobs.  As city treasurer Mr Matheson had pledged not to carry out compulsory redundancies.

Glasgow Council officials claimed that the jobs pledge was being honoured and that the two men were not included because they were on fixed term contracts.

A council spokeswoman said: “No one is being made compulsorily redundant.

“Some temporary staff on fixed term contracts which are coming to an end may find their contracts are not being renewed.”

However SNP MSP Bill Kidd condemned the sackings and said it exposed the true face of Labour in power and why they should not be trusted with power in the coming Scottish Parliament elections.

“This just shows how much Labour’s rhetoric about protecting jobs and the vulnerable are just hot air. It also begs the question of how much authority Iain Gray has within his party.

“Whilst the SNP Finance Secretary John Swinney is working hard with council and trade union representatives so that local authorities sign up to the Scottish Government’s policy of no compulsory redundancies, Labour in Glasgow has shown how much they care – and it’s not a jot.

“Of course these are hard financial times because of Tory cuts but this action just shows how Labour are just like the other London-led parties.”

Gordon Matheson recently claimed that the SNP were anti-Glasgow and that the budget settlement that contained an extension of the council tax freeze, job protection for teachers and police as well as a commitment to free personal care was like a “dagger through the heart” of the city.

The outburst brought a response in kind from the SNP leader of West Lothian council Peter Johnston who said:  “If Glasgow Council Leader Gordon Matheson does not understand that the level of grant for each council is set by a pre-agreed formula between CoSLA and the Scottish Government, then he is not fit to hold his current position.”