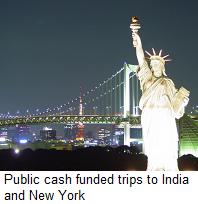 The use of public funds at Strathclyde Partnership for Transport by senior Labour councillors and officials – including for a trip to Manchester on the same day as the UEFA cup final – has been condemned by the Accounts Commission.

A report published yesterday revealed that between 2006 and 2009 SPT’s former management, many of whom were Labour councillors, claimed £100,000 in “excessive” expenses.  The report also reveals that investigations found that receipts had been shredded and that £32,000 was still unaccounted for.

SNP Councillor Graeme Hendry and Glasgow MSP Sandra White today said the report showed the disregard by Labour for taxpayer’s cash and repeated calls for a full investigation of revelations over expenses and contracts at a range of organisations associated with Glasgow’s Labour City council.

Cllr Hendry also raised questions over former Chief Executive Ron Culley who was allowed to leave with a £60,000 pay off and argued that the report shows he should have been sacked.

The Accounts Commission report states that:

The Accounts Commission concluded that “the circumstances of the visit to the Greater Manchester Passenger Transport Executive constituted an unacceptable use of public money and SPT should seek repayment of all expenses associated with this visit.”

The report also raises concerns over the judgement of senior members of SPT and their attitude toward public money with the Chair of the Accounts Commission stating:

“There appears to have been a culture and behaviour by some of SPT’s most senior elected members and officers at the time that fell well short of what is expected of those holding public office and overseeing public funds.”

In relation to the trip to Manchester the report by the Controller of Audit states:

“The evidence leads me to the conclusion that the visit to the Greater Manchester Passenger Transport Executive was arranged to coincide with a sporting event.  The related travel and accommodation arrangements were geared towards facilitating attendance at that event as opposed to any strong business reasons.  That is an unacceptable use of public money.”

Other trips included India / Dubai and New York and an audit report by KPMG noted over £57,000 of credit card spending in two years – without full receipts to back it up.

Cllr Graeme Hendry who exposed the abuse of expenses by the former Council leaders of SPT and senior officials said:

“Every penny of this money must be reclaimed and put to public use.

“SPT’s Labour leadership had a complete disregard for public cash.  Labour Councillors and senior officials blew taxpayers money on football matches and foreign trips with no benefit for the public.  That is unacceptable.

“And the senior official responsible was able to leave on health grounds with a sixty thousand pound pay off.  After this report he should have been sacked.

“This is a damning report of the practices at SPT.  Labour Councillors fell far short of the standards taxpayers demanded and they are still hiding from proper scrutiny of activities at the council.

“Those responsible don’t just owe SPT money, they owe the people of this city and of Strathclyde an apology for the misuse of public funds.”

SNP Glasgow MSP Sandra White echoed her colleagues statements and questioned the culture of Glasgow Labour when dealing with the public’s cash saying:

“While SPT bosses were living it up on our money the transport system in this city was getting worse.

“I welcome this report but it should not be the end.  There have been many more concerns raised about the expenses culture of Labour members in Glasgow and the use of ALEOs by Labour’s leadership in the city to keep councillors content.

“The pay offs and deals done to get those responsible at SPT out of the door must now be investigated by Parliament’s Audit Committee.

“If this is how Labour use public money in Glasgow they are not up to the job of running the council and certainly not the government.”

Earlier this year, at the height of the Stephen Purcell scandal, it emerged that Labour councillors had been awarded highly paid positions on the boards of so called Arms Length Organisations set up by the former disgraced high flyer.  It also emerged that companies owned by Labour donors had benefitted from lucrative contracts from the Labour run authority.

Calls for an inquiry into the goings on at the council were blocked when Lib Dem councillors joined with their Labour counterparts to outvote the SNP group.

[Note from Editor: Yesterday’s FMQs can be viewed in the Politics section – we hope to make this a regular item.]