Often likened to the work of Tom McRae, Radiohead, or Jeff Buckley, it’s no wonder that Gorman’s material can grip you by the throat one minute, and move you to tears the next.

Frontman Chris Gorman’s previous solo work was self-released as two three-track singles, with Ashes promoted through a UK tour with dates spread between Aberdeen and London after a colossal launch night in Glasgow’s ABC2. It received radio airplay both at home and abroad, with the title track being named XFM Uploaded’s Track of the Week, and played on the PRS New Music Podcast. The band subsequently returned to Leicester’s Victoria, one of the tour venues, as headliners of their two-day summer festival, Hard Drive, to play in front of a capacity crowd.

Supports with Regina Spektor, Ginger Wildheart, iLIKETRAINS, Craig B of Aereogramme, and the Grim Northern Social followed, as well as production duties on an exclusive EP with the Sensational Alex Harvey Band – the last to feature original guitarist Zal Cleminson.

With the release of debut album “Kairos” in May 2009, Gorman have honed their fierce yet fragile sound to a keen edge. Asked about the title of the band’s debut album, Kairos (pron. kye-ross), frontman Chris explains, “It’s about a moment where everything can change, a tipping point, where your feelings or circumstances can switch – right on the edge of yes or no, the line in between. It could be the split second when you decide to change what you are into what you’d rather be. It’s about making the most of the time you have, instead of just counting off the seconds as they pass you. I felt like I’d wasted a couple of years doing what was expected of me and as soon as I stopped, I felt better.” With the album garnering acclaim from the likes of BBC Scotland’s Jim Gellatly and the Daily Record’s Rick Fulton, Gorman gigged extensively with shows from Elgin to Leicester, with a highlight at this summer’s T in the Park. 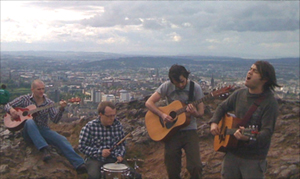 With an invitation to this year’s Japan Music Week in November, the band have been undertaking some exciting fundraising projects – including an Extreme Busking Adventure up Arthur’s Seat in Edinburgh, called “Riff Off A Cliff”. The band hiked up the crag with their instruments and a group of loyal fans to play an acoustic set at the peak to the assembled daytrippers; the set was filmed and selections will be available online during the Japan Music Week campaign. A Glasgow fundraiser at the Vale followed with a storming set by the band, followed by an auction for the chance to have a song dedication from Tokyo, as well as a lot they dubbed the Dinner Party Gig – the lucky winner will have the band round to cook her dinner, and play a set in her house!

With a newly launched website at http://www.gormanband.com,2010 has been the busiest yet for Gorman. You can help spread the word for independent Scottish music by logging onto the website, and clicking the “Support” button to make a donation to the band’s Japan Music Week campaign: every pound will help. By way of thanking you, they’ll send out a free mp3 to everyone who does.

There will be more in the pipeline in the run-up to Japan Music Week, so join the mailing list by contacting gormanband@hotmail.co.uk for updates.

“tender and heartfelt….the album has the perkiness of pre-stadium Coldplay”

“amazing voice, and piano hooks Tori Amos would be proud of”

“fully deserved of filling stadiums in years to come…. expect to see a lot more from this band.”