Serial political party activist and former Member of the European Parliament Hugh Kerr has finally met his nemesis. His career began with Labour and moved first to the Scottish Socialist Party, and finally the SNP. After leaving the last in disgust he applied to join the Scottish Greens. His application was rejected. Whatever will he do now? Here Hugh takes up the story…

In 1998 when I was expelled from the Labour Party while I was an MEP ( I had opposed Blair’s policies and saw through him a bit before everyone else!) I was invited to join the Green Group in the European Parliament and I promised to try to unite the Greens and the socialist groups in Britain.

I was surprised to find myself being opposed by the chair of the English Green Party Jenny Jones, and I heard that Robin Harper, then leader of the Green Party in Scotland, was also opposed to my membership of the Greens.  Jenny Jones flew to Strasbourg ( at European taxpayers expense!) to oppose my entry into the Group. She spoke for 10 minutes about a threat socialists in the Green Group would be and why they should refuse me. I was allowed to respond and the Green MEPs voted by 23-2 to accept me in the Group. .Jenny Jones flew back to Britain and issued a press release attacking me as ” an opportunist carpetbagger trying to steal Green votes” and the Daily Express gleefully ran this story to attack the left!

Despite Jenny Jones and the English and Scottish Greens I was warmly welcomed into the Group and became the spokesperson for the Greens on the culture and equalities committees. My attempt to unite the Greens and the Left in Britain failed miserably, not least because the Greens were hostile to the idea. I returned to Scotland and helped to form the Scottish Socialist Party and was number one on the list for the European Parliament. Ironically the number one on the Scottish Green Party list, Marion Coyne, agreed with me on everything and we agreed it was silly that we were splitting the vote. However the Scottish Greens, like the English Greens, were opposed to a joint list and thought they could get elected without us, and some of them didn’t like socialists! The English Greens did get Caroline Lucas and Jean Lambert elected as Green MEPs but arguably they could have got several others on a Green/Left slate.In Scotland. As Marion and I predicted we split the Green/Left vote: I got 4% and Marion got 5%: our joint vote would have got us elected instead of a Tory who got 7%.

The Scottish Parliament with its proportional list system does allow Greens and Socialists to stand on their own and famously in the 2003 election we elected a “rainbow” Parliament with 7 Greens and 6 Scottish Socialists plus eventually five independents, it certainly made for an interesting Parliament. The Greens and the Socialists got on well on the whole in the Parliament although early on Robin Harper was more conservative than Tommy Sheridan as he was a unionist and a monarchist! Later Green MSPs and indeed many of the members have moved to well to the left of Robin and many regard themselves as green socialists.

After the Scottish Socialist Party imploded after the lies of the Murdoch Press destabilised it, it lost all its seats in the Scottish Parliament and indeed the Greens lost all but 2 MSPs. One of the major reasons for the failure of the Greens and the left was the revival of the SNP. People forget the SNP wasn’t always popular: in 2003 under the leadership of John Swinney the SNP won only 26 seats compared to 69 in 2007. The rise of the SNP has now eroded support for Labour, reduced to being the third party in Scotland, but also made it difficult for parties on the left. The Greens did better this year, getting six MSPs whereas everyone else on the left was nowhere including the much touted RISE which imitated a Dodo rather than a Phoenix getting less than 1% despite being heavily plugged by the Herald and Bella Caledonia. Ironically the best vote on the left was Tommy Sheridan’s Solidarity in Glasgow (though still some way off being elected).

I joined the SNP after the 2010 election when I realised the left were stuffed for a generation. I was warmly received by Alex Salmond and Nicola Sturgeon and my local members in Edinburgh West where I became an active member and was a member of the National Council and a delegate to conference where I spoke regularly and was well received by the delegates particularly the new membership at last year’s conference who responded warmly to my speech supporting socialist and republican ideas. Last year I almost became the SNP MP for Kilmarnock, my old home town, losing the nomination narrowly to a local councillor Alan Brown who became the first SNP to be elected at last year’s general election.

I resigned from the SNP just before the Scottish Parliament election this year when Nicola effectively endorsed the Sun by being photographed holding up the front page which of course had endorsed the SNP in Scotland (while attacking them in England!). Since I have spent much of my political life opposing the evil influence of Rupert Murdoch both in the European Parliament where I helped to frame European laws that prevented Murdoch and Berlusconi taking over European satellite TV as Sky has done in Britain. Also in Scotland I have watched the Murdoch press destroy the left in Scotland by bribery and corruption and of course their vile rags whip up the racism that permeated BREXIT.I am with Dennis Potter who named his cancer “Rupert” as he said ” I can’t think of anything more evil in the world”! 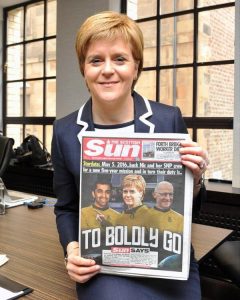 So when I saw Nicola hold up the front page of the Sun it was step too far for me and I decided to resign. Since I like to be part of a collective and discuss politics I thought I would join the Greens in Scotland since I judged that many of their 8,000 new members were like me on the left. I joined online and paid £10 a month towards the party and attended my first meeting in the Southside where I was warmly welcomed by the local members. I made it clear that I had no wish to become an elected MEP, MSP, MP or councillor, I have officially retired from electoral politics after a lifetime of activity. However I said I was happy to lend my knowledge and experience to the party and offered my services to the international committee and to my local MSPs. Indeed I argued in articles in Newsnet Scotland that Edinburgh electors should vote Green on the list since the SNP would win most of the first past the post seats. This proved true except in Edinburgh Central my constituency where Ruth Davidson squeezed in after a 5 way split of the vote! I was particularly keen to see Andy Wightman in the Parliament with his great expertise in land reform

Imagine my surprise then after several months membership when I got a message from Peter Morrison the operations manager of the Scottish Green Party (is that like Labour’s Compliance Unit?!) saying:

“Dear Mr Kerr, I write to inform you that the Scottish Green Party has decided to reject your membership request. Your membership payment will be refunded.I would like to thank you for your interest in the party. Kind regards Peter”

I asked Peter Morrison why my membership had been rejected but he said he couldn’t tell me! I wrote to my Green MSPs Andy Wightman and Alison Johnstone explaining what had happened and sending them copies of my articles arguing for a Green vote on the list. I never heard a word back from them or any response from phone calls to their offices. When I worked for Tommy Sheridan we had a policy of responding to all queries within 24 hours, but then maybe they didn’t want to respond!I finally met Andy Wightman at a Wordpower event and asked him to investigate why I had been rejected. He later told me that they wouldn’t tell him why my membership had been rejected, and he is an MSP!

I suspect some of the Green Party leadership don’t like my links to Tommy Sheridan though it is more than 10 years since I was Tommy’s press officer. Some no doubt don’t like the fact that I’m a socialist although I suspect many of the newer Green members would also class themselves as socialists, as we say on the left you have to be red to be Green. However I hope that most of the new members would be rather surprised to find that their party rejects someone who has a long track record in supporting their kind of politics,who argued for a Green vote in the Scottish Parliament elections despite being an SNP member,who was the first Green parliamentarian in Britain. I hope they would also be concerned that their party can take this decision in secret with no chance for me or them to discuss it or even their MSPs to comment on it! This is control freak behaviour more redolent of New Labour or the “Labour Compliance Unit” which has rejected thousands of prospective Labour members for ” thought crimes on Facebook”! The Greens have always been seen as ” nice fluffy ” party in Scotland remember Robin Harper “the jolly green giant” with his colourful Dr Who type scarf?! Perhaps their members at this weekend’s conference could raise the issue of my rejection and ask are the Greens becoming a rather more repressive regime!

As for my political future having been expelled,resigned or rejected by most political parties on the left where do I go now? Some of my irreverent friends suggest I haven’t tried the Tories or the Liberals yet! It’s true I now have Ruth Davidson as my local MSP and I did get a kiss from Annabel Goldie when I left the Scottish Parliament! (we had a common enemy in Labour!). Others that I should join the Liberals but I’m afraid I can’t take Willie Rennie seriously although I used to get on well with my local Liberal MSP Margaret Smith! Seriously when you are socialist, a republican and above all a supporter of Scottish independence the SNP and the Greens are the only realistic political options in Scotland at least until Scottish Labour come round to supporting independence! Perhaps I should rejoin the SNP and join the new socialist group in the SNP and help to keep them on a left course for Scotland. Lesley Riddoch said I just accept being an independent commentator like her, but I like being part of a collective where you can discuss politics and act to implement them, I have been active in politics all my life and although I have given up political ambitions for myself I haven’t given up politics. So watch this space,in the meantime I am busy reviewing opera and classical music for TV Bomb, I remain an active retired member of the NUJ and I chair my residents group in my housing association estate in Wharton Square and I enjoy life!

(Ed. There is one other party you haven’t tried Hugh… we hear Ruth awaits your call…)

My ‘blind spot’ about the prisoner in D hall