The inhuman fiasco at American airports and the failure of a British Prime Minister to condemn it outright is another sign of how the governance of the UK is spiralling in unpredictable directions. Like it or not, Britain is now tied in the eyes of the world to the fantasy politics of Donald Trump having sent our national leader scurrying to Washington to curry favour while the more sanguine heads of European governments kept their distance.

While the world looks on aghast at the turmoil caused by banning designated muslims entry and instigated apparently on a whim to appease an anti-foreigner support base, Theresa May finds herself on the predicted horns of a dilemma – desperate to hold Trump’s hand in friendship yet pulled by public opinion to damn him.

Her cloying attachment to the manic president and the excruciating White House news conference they orchestrated, are ratcheted up to red by Brexit and the glaring gap that is emerging in the UK’s future trade. We would certainly have seen a British PM gasping for presidential attention but the imminent negotiating table clash with the EU has rushed her into undignified alliance.

That Scots, as UK citizens, are caught up in this cack-handed affair, is the latest side effect of the decision by Scots to throw in our lot with London for better or worse. The reality of remaining Better Together is being tied to a weakened British state casting around for new allies, forging friendships with a man who should best be watched carefully before being embraced followed by a defence sales deal with Europe’s most dictatorial and anti-democratic leader in Turkey.

We are disengaging from the world’s most influential grouping of civilised democratic nations – and its largest trading bloc – to enter a shark tank of hardline nationalists prepared to single out groups they deem unacceptable, disrupting families and business across the world. The leaders of American tech firms have condemned Trump’s entry ban as un-American saying it impacts directly on the talent they employ.

Those of us who followed the independence referendum will recall how insipient racism was brought to bear by the Unionist campaign by inferring the Scots’ relatives in England would become foreigners. It was never explained how a family member could be instructed to treat a loved one thus or how it was possible for a son in Australia with a different passport not still to be thought of as family. Indeed Margaret Curran told me in a BBC studio that her own people in Ireland would be foreigners to her – despite the British legislation which released Ireland from British control specifically saying no Irish citizen would be treated as a foreigner in the UK.

Here we see how the threads of belonging which bind society begin slowly to unravel when we fail to secure them. In a few short years Labour went from losing control of all immigration numbers because they didn’t take it seriously, to talking of Scots as foreigners, to British Jobs for British Workers, to the notorious Control Immigration mugs and now competing with UKIP for their racist votes. No wonder the Tory party feels relaxed about dealing with Trump when the opposition itself is halfway along the road with them.

I fear Labour’s failure to use leverage over the Brexit vote is another step towards the racist state. Not because that is Labour’s position – I believe Jeremy sees Brussels as a big business club – but once you start issuing visas and telling European academics and students they’re not wanted, you give a dog whistle to the extremists.

Whatever travails would have beset a newly-independent Scotland, being stuck with a budget-slashing right wing government ripping up our agreements with Brussels and discriminating against incomers wouldn’t be among them. I long for the rest of the world to know that Scotland is different.

Of course it’s pretty obvious from my bag of poisonous online mail that there are many Scots who prefer Theresa May crawling to Donald Trump than they do Nicola Sturgeon taking our place at the UN and the EU. They have so contorted themselves into a rictus of hatred over the rise and rise of the SNP that reason has deserted them. Which is why I have been cheekily asking about some people’s mental competence.

There is today global outrage and deep concern at the behaviour of Trump. Yet in my bag, I’m not sure one raging Unionist has raised his eyes to see it. There is no analysis of an almost opposition-free government. No assessment of the economic impact of Brexit on Scotland, despite a wealth of data. Whether I rant or write constructively the message is mostly the same – a football chant of hate slogans and the tired tope of Braveheart.

I have no idea what these people think of immigration or if they approve of the EU, if they’re ready for the Scottish Health Service to be plundered by American corporations, or are prepared to eat artificially grown beef, both of which are likely to stem from a May-Trump trade deal – if he hasn’t been impeached by then.

The worry has to be that there is a lost bloc of voters who will sign up to anything so long as it is against the SNP. And, in a way, that fits the approach of the British government whose mantra is always to concede as little as possible to stave off rebellion. Which is why many on the Yes side have always argued that it will be Unionism that brings about independence rather than Scottish nationalism. The obdurance and mendacity of London combined with the anti-Scottish subservient bile of a Unionist rump is driving change among thinking Scots. Linkage to a possibly deranged American president and the havoc of leaving the EU could be the final elements in the equation that produces the correct result.

I was cross and had a rant last week. But I also detected in the output of Macwhirter, McKenna and Tickell (check the Newsnet podcast) if not an anger, then a profound frustration pointing to a tipping point. That is, we are heading in one direction, as the late Tam Dalyell said, the slip roads are closing off. You an hear it in the words of former nationalist critics like Labour left-wing lawyer Mike Dailly who has joined the SNP and from Tom Morton, the broadcaster, who was virulently No in the indyref but has now converted to Yes.

The bitterness and bile from the Unionist fringes is I think, a symptom of fear. It is so angry because it has little left to fight with. Hardly ever do I hear justification of the Union, its merits, its contribution to Scottish life, peoples’ attraction to it or how it will cope with the confusion and uncertainties of the coming years. All that’s left is the acid aftertaste.

We can sit back and accept the humiliation of being Trump’s best friends and surrendering to his trade deal. We can trust in Theresa to extricate us from the EU. Or we can become the state we want to be.

And it’s goodbye from them… 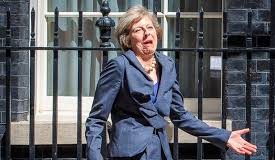 Why #GE17 will be known as the anti-politics election