I was going to blog the other day, but instead had to handle an urgent call from my accountant in Panama. Sounded a bit worked up. Seemed to be saying I’d be exposed as a tax dodger. But I said there’s more chance of me being the Prime Minister of Iceland.

I must say I’m with the parody Tory MP account which declared the Panama Papers were only shocking to those who didn’t work hard enough to have tax haven accounts. It’s well known that Tesco shelf stackers work harder than anyone, often overnight, and all of them have secret hoards of untaxed cash stashed in Jersey. Same with our window cleaner Brian who is so greedy he has three jobs. I await his name appearing alongside Putin’s.

It’s typical of the Left to make a ballyhoo out of wealth genuinely earned and honestly hidden in tax shelters. How do think the poor in Panama survive and what stops them getting on boats and heading for a benefits bonanza in Britain? The toxic mixture of jealousy and ignorance brings out the worst in the Guardian types. And just remember – Polly has a villa in Tuscany.

This story of course is the triumph of capitalism. It brings together in one jungle-covered snake pit famous only for through transit (via the canal) every double-dealing, grasping racketeer from communism, progressive left-leaning democracy (600 Icelanders on the list out of 320,000 population) and from every ethnic background in relentless pursuit of profit. To achieve it they leave their morals at the door, their country in debt and their humanity compromised – imagine knowing that you are cheating everyone you deal with. It is the apotheosis of greed and the ultimate expression of right wing zealotry in which you claim anything and everything you can get away with. It’s a stretch but it is on a continuum along with letting thousands of steel jobs go in awe of ‘the market’, even when the market is rigged as it is in the case of Chinese steel and in the case of those with the means to cheat their fellow citizens by avoiding paying their share of tax.

In normal times the conjunction of these two events – a Tory government caught chillaxing over 40,000 jobs linked to a strategic industry and the proof of global larceny by the rich, including the Prime Minister’s family, should produce a harvest for Labour. But we all know it won’t. Not in Scotland where Labour already lies on the slab awaiting dissection. And not in England where the bitter divisions and clueless leadership make Corbyn, thus far, unelectable.

Britain carries a heavy responsibility as the ‘ruler’ of most of the tax havens but this is a matter now for global oversight by the institutions that always claim world respect for their powers of regulation – the World Bank, the IMF, the G20. There can be no escape from coruscating action now to end the rip off. People around the world struggle to survive while the elite line their pockets and press the No thanks button under Pay Your Taxes. Here we harass the disabled with the bedroom tax, lecture workers about tightening belts and retain as Chancellor someone whose family company doesn’t pay corporation tax.

This is corrosive when pensioners see the state take 20 per cent of their income, or confront the stark truth of paying another 1p in the pound. It is corrosive too because it shakes the faith of populations in the institutions that govern them. By sanctioning responsibility-dodging they make it less likely those minded to criminality will see any point in obeying the rules of society. Fascinating to think how Cameron started by telling us we were all in this together and yet everything he has done since mocks the very idea. They are all in together – every hook and crook with contempt for civilised society. 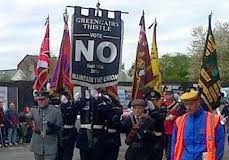 Orange festival is no threat to forward-looking Scotland