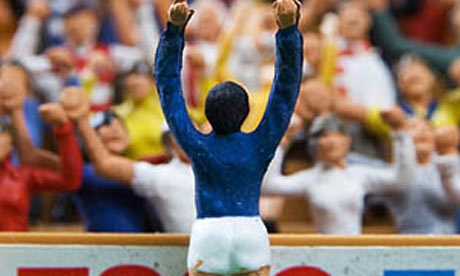 Former First Minister Henry McLeish’s long-awaited review of Scottish football is a glaring example of just how badly wrong a former politician can get things when trying to salvage what is left of The Peoples’ Game.

But give McLeish his due – the idea of the smaller clubs being regionalised makes perfect sense. Equally, the accusations of the Scottish Football Association lacking openness, accountability and transparency were welcome, but long overdue. And did he really tell us much that supporters and observers of Scottish football didn’t already know about the SFA?

Many of the initial responses on Scotland’s back pages were tragically predictable in their excitement of McLeish’s plan which they hailed as ‘radical’ and ‘revolutionary’. In a classic build-up and crash down manner this euphoria has since cooled but the emphasis remains on the best interest of the elite being the be all and end all.

The fundamentals of Scottish football’s domestic set up – in terms of league restructure – of this blue-print lean heavily towards a two-tier SPL with leagues of 10 teams. And yet it is the elitist nature of small leagues and the monotony of clubs playing each other four times a season has killed competition and strangled the life out of Scottish football.

McLeish’s league structure plans are very similar to proposals drawn-up the week before, by the SPL working group, which is spearheaded by Rangers Chief Executive Martin Bain and Celtic’s Peter Lawwell.

Paul Goodwin, a director and spokesperson of Stirling Albion FC, is not the stereotypical mouthpiece of a football club. He hates wearing suits, can’t stand the junket-culture of the football insiders (not only at the much lambasted SFA but in league football too) and sees sustainable and fan-owned football clubs as the way forward.

Goodwin helped lead the fans takeover of SFL Division One side Stirling Albion and is not impressed with McLeish’s report. He thinks it is ridiculous that the SPL working group came up with similar proposals just days before hand, after McLeish’s 18 month investigation was published.

It’s a stitch-up. The report has spent a considerable amount of time with the SPL teams and it’s no coincidence they are saying the same things.

“It talks about the possibility of a bigger top league then drops it in the recommendations. I can’t see how making a league that is already too small smaller improves things in the slightest.

If there is a real desire to secure the future of the middle sized clubs then there should be one top division of 18 teams and gate receipt profit should be shared between the clubs. This would make things much more competitive.

In July this year, Stirling Albion made history when they became the first senior football club in Scotland to be fully owned by their supporters. The Stirling Albion Supporters Trust took over when the club were threatened with bankruptcy and became a 100 per cent community-owned club.

Clyde FC too have moved to a progressive democratic fan-orientated structure. Clubs in Scotland need only to look south of the border to see what can be achieved. FC United of Manchester were set-up in 2005 by disillusioned Manchester United supporters following American billionaire capitalist Malcolm Glazier’s controversial takeover of the club.

Glazier’s personal wealth is estimated at over £2billion but the purchase of the world’s most successful football club was done with borrowed money. This debt – last measured at over £700m – is now Manchester United’s debt.

FC United’s success has been immediate, yet modest, since their inception as a semi-professional club. They understand the role of a football club in a community being far more than just watching 22 people kick a ball round a park. FC United general manager Andy Walsh recognises football clubs as having a social responsibility.

They have recently secured planning permission from Greater Manchester Council to build 5,000-capacity stadium at Newton Heath in East Manchester. The project will cost around £3.5m and will in part be funded for by a community share scheme. They exist as not-for-profit community benefit co-operative where a capital shareholder of the maximum £20,000 holding has the same democratic power as a voting member of the club who has paid £12.

FC United general manager Andy Walsh argues that the model his club is based would work well for many Scottish teams in the SPL and SFL.

He also fears that the game north of the border would suffer if McLeish 10-team league was put in place. He said:

It would be quite wrong if there was any further concentration of resources and finances into a smaller group of teams. I can understand the desire of the bigger clubs like Rangers and Celtic trying force a higher level of competition which might enable them to get better results in Europe, but the elite which they already dominate isn’t working. They can’t survive in isolation.

Supporters Direct – a Government funded collective fans lobby group – are keeping a close eye on this. Supporters Direct Development Manager James Proctor said: “These findings raise some serious questions for everyone who cares about the future of Scottish football. There is a clear gap between what supporters are telling us they want and the proposed reforms that are being put forward by SPL clubs.”

Amongst the dozens of busy fan-interactive SFL club websites there are thousands of threads about small leagues.  A Partick Thistle fan, who posts under the username of Paddy Thistle, sums things up perfectly on We Are the Thistle when he writes: “No wonder Scottish football is dying on its feet , I’m sick of playing the same teams 4 times a season. This year we will have played Falkirk at least 6 times excluding a possible cup replay. Given we are going there again in a couple of weeks I’m most likely to give Saturday a miss, yet if we play then just the twice in the league I wouldn’t miss it.”

Other users of this forum, and rival fans on the unofficial chat-rooms of fans of Falkirk, Dunfermline, Dundee, Queen of The South, Airdrie, Morton and the rest argue – with good reason – for a bigger top league, three or four up and down, a incentive for youth development, a need for community engagement and the chance for Scottish football to be reignited by competition and realism which would brighten up the national sport from the bottom up.

The report’s inability to recognise a widespread desire to reintroduce terraced standing areas in Scottish football grounds shows a painfully obvious lack of research and consultation with paying customers. Indeed, an immediate canvas of opinion of fans from Supporters Direct show that nearly 93% of fans canvassed feel they have not been adequately consulted over the proposed changes.

McLeish’s report is top heavy and neglects the grass roots of Scottish Football. For the game to grow and flourish again then the debate should and must include the people who go and watch football. And it has to do this now, before it is too late.