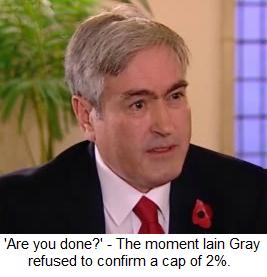 Labour’s Holyrood group leader Iain Gray has caused further confusion over his party’s stance on council tax after refusing to confirm that any rise would be capped at 2% should Labour triumph in next year’s Holyrood elections.

Mr Gray was giving an interview to the BBC, which was broadcast on the web, when he was asked to confirm that, if he became First Minister, Labour would essentially cap council tax rises at about two percent.

Mr Gray appeared reluctant to give such a commitment, then, when pressed by the BBC’s Raymond Buchanan on the matter, he appeared momentarily lost for words and could only repeat “are you done?” … “are you done?”.

Labour’s Holyrood group leader has appeared to contradict himself several times since initially confirming his party’s support for a rise in council tax in order to address the public spending cuts caused by the UK deficit.  However the party were put on the back foot after a BBC poll revealed that most Scots would be unhappy with such a tax rise. The SNP have already pledged to make funding available in order to extend the current freeze for a further two years.

In his speech to conference yesterday Mr Gray avoided mention of the council tax.  However his recent gaffes will surely be seized upon by SNP strategists keen to capitalise on what they will regard as Labour’s weakness.

With the economy expected to dominate much of the Holyrood election campaign, issues such as tax may prove crucial.  A leaked Labour document has revealed that the party are considering a “basket of taxes” in order to address public spending cutbacks.

More Scots blame Labour than any other party for causing the economic crisis and as such the party will have a fight on their hands if they are to persuade those same Scots to pay more in taxes in order to make up any funding shortfalls.

The full interview can be seen here:
http://www.bbc.co.uk/news/uk-scotland-scotland-politics-11651862