Here is someone else who is beginning to agree with me that Japan is the flesh eating zombie behind the door waiting to surprise us.

I have been saying for most of this year that Japan may be wild card because Japan has up till now not ever had to sell its debt on the open market, but very soon now it will have to. And when it does Japan’s borrowing costs will triple! For anyone new here, if you should want to read some of my earlier analysis of Japan you can look here and here.

In short the argument is that up to now Japan has sold its debt to its own people via their pensions. This has allowed them to sell as much debt as they wanted and at a third of the best market price. But Japan’s piggy bank of savers are all tapped out. Japan’s savers have no more savings to spend on bailing out their banks or their idiot ruling class.

So in 2011 Japan will have to compete with Germany, the rest of Europe and America. Japan has been selling its debt at 0.5% while America pays more like 1.5%. That is about to end and when it does the world will take notice. It may not explode over night. But Japan has a shed load of debt it needs to sell. This is from the article linked to at the start of this post. 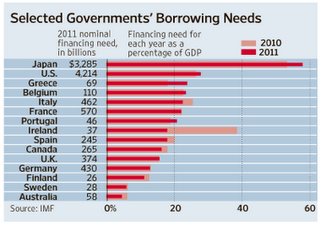 Next year Japan needs to sell about 3.2 trillion dollar’s worth of debt. Which is less than the $4.2 Trillion the US needs to sell but as a percentage of Japan’s GDP it is a massively greater burden – 60% of their GDP. And if they have to sell it, as I and now others suspect they will have to, on the open bond market, not only will it glut an already turkey stuffed market, but even if they do find buyers they will have to pay triple what they have ever paid before.

Now that, to echo the past post below, is Armageddon.

Japan will not find buyers of all that. Even those who they do find will be nervous and will push up the price not only for Japan but as collateral damage for the US as well.

The short headline is that next year the amount of debt all nations, not to even speak of their banks, are going to be trying to sell and roll over is mind boggling. It is out of control. It is too much.

The sheer volume will frighten the market and spike rates – for everyone. At the same time growth in most real economies is stalled. Only the stock markets and currency speculation are growing and that is because they are where all our printed and borrowed money is going. To fuel speculation on what is left of the rest of our national economies.

I am more convinced than ever that Japan is the wild card.

This article is reproduced with thanks to David Malone. He is the author of the book Debt Generation. You can read and listen to excerpts from his book here: http://www.debtgeneration.org/index.php