‘Council tax bailiffs should be called off, say charities’ (BBC website 4th May 2016)

I know, I’m behind on this story. As often before, I missed it because it attracted little attention at the time. It was only when I came across a report by the Step Change debt charity, ‘Council Tax Debts’, that my regular interest in clarifying the Scottish dimension of any political information, arose. None of the above media reports mentioned Scotland nor did they mention England either. Even the BBC, which has a proudly-claimed responsibility for accuracy, failed to clarify that this was not a ‘crisis’ in Scotland.

The Step Change report itself only remembers, on the 19th of 21 pages, to remind the reader that the situation in Scotland is distinctive; more of this below.

This tendency by mainstream media in the UK to report English stories as if they are applicable to Scotland is all-too-familiar. Perhaps the best or worst recent example is the continuing reporting of a spike in hate crime after the EU referendum. Despite Police Scotland reporting no comparable spike in Scotland, neither the UK nor the Scottish media seem aware or concerned to draw attention to this. Readers can see my recent piece on this on the Newsnet.scot site.

In addition to this inaccurate, thus misleading, reporting, Scottish audiences often miss-out on important news stories which, typically, are favourable to any assessment of how well the Scottish Government is performing. A good example of this, also reported by me on Newsnet.scot, was the December 2015 report from the UK Government-funded and sponsored, Social Mobility and Child- Poverty Commission, which concluded:

‘Scotland, for example, has the smallest number of children living in poverty among the constituent nations of the UK, the lowest prevalence of low pay and far more young people from deprived areas going on to higher education.’

In the above piece, I argued that this bias by omission contributed to the weakening of confidence in the project that is Scottish independence. If we are to have the necessary confidence to believe in ourselves enough to vote for it, then we need to see, whenever it emerges, evidence that we are already making strides toward the kind of nation we aim to be. A repeated failure by our media, especially the BBC, to tell us what is happening, accurately or at all, is powerful propagandising which can weaken the will of some voters.

Add these – the conflation of Scotland with bad news about the rUK and the omission of potentially good news about Scotland – to more the deliberate much-repeated, active scare-mongering on the Scottish NHS, economy and education systems and we risk a powerful dampening effect on the spirit of potential Yes voters.

Now, here’s another, council tax debt. The three stories above make it clear that this is a crisis for quite a large number of poor individuals and families and that the situation is worsening after years of Tory austerity programmes. The Step Change report makes this very clear:

‘In 2010, just 10% of Step Change Debt Charity clients had arrears on their council tax bills. In 2014, this had grown to 28%. The proportion of people we help with council tax arrears has almost tripled in four years, growing faster as a problem than payday loans. Not only are more of them in arrears, they owe more. Our clients owe an average of £832 in council tax arrears – up from £675 in 2010.’

The report also makes clear just why this is such a serious matter when you look at the groups most affected by such debt. People with council tax arrears are:

When I read this, I hoped that the Scottish government would have done something about this. Not absolutely sure what the situation was in Scotland, I was pleased to see this near the end of the Step Change report:

‘Scotland has statutory protection for people with solvable or temporary financial difficulties through the Debt Arrangement Scheme (DAS). This protection allows people the space and time to regain control of their finances – by making affordable repayments to creditors, and freezing all charges from the date of application – as soon as debt advice is sought. Council tax arrears are included in DAS. A similar statutory scheme is needed for England and Wales. Only by giving this protection a statutory underpinning can it be guaranteed to people struggling with mounting debts, encouraging them to seek advice, and ensuring that their repayments can remain affordable and sustainable.’

Now, I’m not saying we’re perfect. I know that there is still far too much poverty in Scotland. It’s still disgraceful. I’m just saying we need to know where we stand so that we know what to do next. If our mainstream media don’t inform us of what has happened, honestly and comprehensively, then what use are they to us?

As before, if you can find a mainstream media report doing the above, send me the link and I’ll eat another potato I’ve been keeping. This one looks like the Donald. 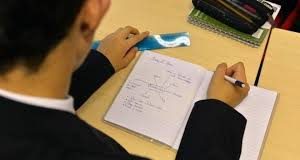 Politics, private schools and the perpetuating of a social elite