So is the driving refrain of the new single from Josephine Sillars band, in a departure from their previous EP Ripped from the Wire Frame. Sillars has left her keyboard behind and carries the track with only her vocals structured by Samuel Barnfather’s percussion.

It has been stuck in my head since Sillars sent me the single last month.

It has pervaded every other musical tangent.

For a while it was the beat I walked to. The answer on my lips to every question.

It is a powerful piece of work. I began to have problems writing about it.

Power. When that man took his office in the US.

Power. When that woman started playing her hand over Brexit.

Power. Where no party seems capable of opposition as the Scottish Government is told we have no say in this.

Power. As I start taking bets on how long before we are de-devolved and reined back in under Westminister alone. You may scoff but I haven’t been wrong in my doomsday predictions yet.

but everybody’s got their problems with power’

‘Have you ever thought about God?’ a young man asked me as I chugged down what I had thought was a tea and what was rapidly becoming obvious was a pint of boiling water.

I spent the best part of a year and a half researching the origins of Christianity in an attempt to keep my mind occupied in the aftermath of a nervous breakdown.

Having been brought up without religion in my life, I found the stories fascinating. I enjoyed thinking about God, using an academic part of my brain that had lain dormant in employment post-graduation.

‘Yes,’ I said. He seemed surprised.

‘What do you think about Jesus Christ?’ he went on.

When we pin our hopes and dreams onto an idea, or more dangerously a single person or party that upholds that idea we relinquish our own power to them. They can only ever disappoint us unless there’s a strong PR team picking up the pieces after they fall.

‘I think he had problems with power,’ I replied.

I spoke with the young man outside the university until I finished my cup of water. He told me his path to needing a power above to let him know he was loved, he was safe. That this whole mess of a world had a reason. And I smiled recognising a lot of the same fears and concerns and reaching that same conclusion that the world is deeply flawed. That human nature is animal and driven by need.

We mask it in our daily addictions and throwaway mistakes but we are beasts one and all underneath.

But that hadn’t sent me down a path looking for a higher power. It strengthened the power within myself to take everything as it comes. To try to understand every action and decision from a base desire to be in control.

In the face of bad news after bad news about petty fights and disagreements, all the while the war rages on with no foreseeable end. I can understand the fear.

This is an age of anxiety. Where virtually all our communication is written, where communities have been uprooted and divided. Where the real fight on our hands is diluted with bickering across the Left about what is the right and proper way to oppose. 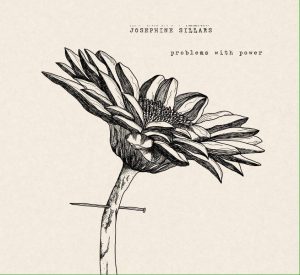 We are all ultimately powerless in the face of our own mortality.

Accepting that fact freed me from the grip fear had held over me for years.

We do not need anyone to wield power. To take control for us. Not when we hold so much power in ourselves.

That cup of hot water tasted like tea until I acknowledged that it definitely was not.

But I couldn’t be angry. After all, I had only accepted my defeat two thirds of the way through the cup. At moments I had enjoyed the taste.

And as the young man prayed, not for me, but in order to thank someone he believed held the ultimate power in our lives for simply providing him with an interesting conversation I wondered if he would still be interested in what I had to say had he known that it was merely my own power, hard won, that felt safe to reveal itself to him.

I thanked him instead for choosing to listen.

And carried on my day, with Sillars punctuating my pace.

Josephine Sillars Band release their single ‘Problems with Power’ on Traffic Cone Records 10/02/17 and launch it at The Hug & Pint supporting Jesse Rae 11/02/17. Tickets available online and include a copy of the single: https://www.fatsoma.com/twentyten/fp00ctt7/jesse-rae