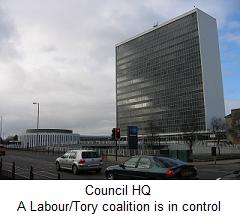 A Scottish local authority run by a Labour/Tory coalition is facing paralysis after the ruling Labour group threatened to call a vote of no confidence in the authority’s top officials following a series of financial blunders and rows over expenses.

South Lanarkshire, Scotland’s fifth-largest council, recently announced the need for £120 million worth of cuts including the closure of primary schools and the loss of 1800 jobs.  However splits have appeared between the council’s ruling Labour group and top officials after it emerged that the amount of cuts had been overestimated by £40 million.

The crisis hit council recently hit the headlines when it revealed it had been scammed out of £102,000 by a gang of West African crooks, two SNP councillors allegedly called for the individual who authorised the transfer of the funds to be sacked.  A row erupted and opposition politicians responded by accusing SNP group leader Anne Maggs of expenses irregularities.

Council Chief executive Archie Strang then decided to call in independent auditors Pricewaterhouse Coopers to investigate allegations of fraud and councillor expenses dating back to 2005.  The auditors will go beyond that date if they wish to do so.

The fallout over the expenses row and the £40 million blunder has led to the ruling Labour Group threatening to force a vote of no confidence in Mr Strang.  Labour MSP Tom McCabe, a former leader of the local authority, has also waded in accusing senior officials of “jockeying for position “ and of “settling scores”.

Mr McCabe also claimed that there were too many officials and suggested that those at the top should “consider their positions”.

There are fears that the breakdown in relations between the ruling Labour group, which contains head of COSLA Pat Watters, and council officials are hampering the council’s running.  Yesterday Labour members of the council’s administration refused to attend a meeting called in order to discuss cuts proposals.

The leader of the Labour group, Eddie McAvoy, is reported to be seeking legal advice on what options are available regarding the position of the authorities two top officials.  However Labour will be mindful of the possible financial cost of such a move after the Labour group in Edinburgh City Council sacked its chief executive (Paul Lowenberg) many years ago and incurred a considerable financial penalty in doing so.

The Scottish polls and a tale of two coalitions