The SNP have accused Labour of dropping alcohol tax plans because they feared a voter backlash in England and further attacked the London based party for ignoring calls to address high fuel prices.

Only hours after Labour said they are scrapping the planned rise in cider duty because of the backlash, and on the day the AA is warning that petrol prices are set to hit an all-time high, SNP MP Angus MacNeil said voters throughout Scotland would be asking why Labour couldn’t scrap the planned increase in fuel tax.

Mr MacNeil also highlighted the first in a series of viral posters the SNP will be producing throughout the campaign which turn the opposition’s posters back on them. This viral poster takes the ‘Ashes to Ashes’ theme Labour used and has Alex Salmond as DCI Gene Hunt saying “Fire up the Quattro? … Only by voting SNP for fair fuel prices “.

Commenting Mr MacNeil said:
“This is the final insult for families and businesses in Scotland. If Labour can drop their plans for a cider tax because of the furore why can’t they do the same for petrol and fuel in general? It shows how the London politicians, as usual, ignore Scotland.

“The latest warnings from the AA confirm that Labour and Gordon Brown have learnt nothing from their years in government.

“And it’s not just hauliers who suffer but ordinary families struggling to run a car for normal use. The effects of rising fuel taxes also impact on prices in the stores with costs increasing to deliver food and other products to the shops.

“An oil-rich nation like Scotland should be reaping the benefits from our offshore resources – not watching as North Sea revenues flow into a black hole in Treasury coffers while the Scottish budget is slashed.” 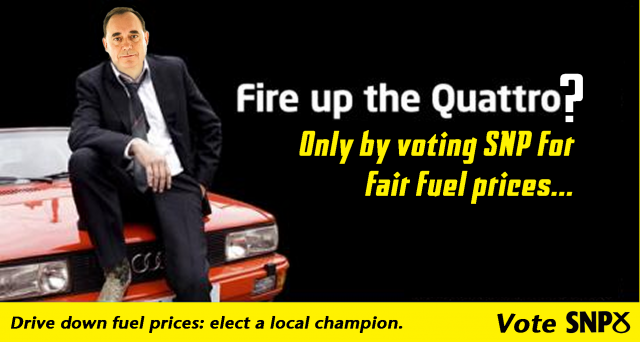 “These images will become a regular feature of our campaign. We will take the posters of our London opponents and turn them back on them to show the voters of Scotland how phoney their campaign really is.”