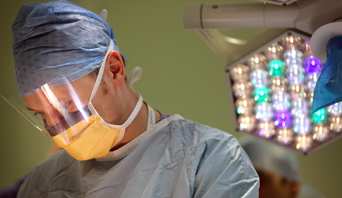 Labour has been caught broadcasting inaccurate figures on the NHS and been forced to withdraw a Youtube video in which Scottish leader Jim Murphy MP tried to blame the SNP government for supposedly covering up the number of cancelled operations.

Murphy used data acquired under Freedom of Information legislation to show that the number of
operations cancelled in Greater Glasgow and Clyde health board was four times that in England.

But he was forced to concede that Labour had “misread the data” and the propaganda film, made outside Glasgow Royal Infirmary, was removed along with a linked tweet.

Posing outside Glasgow Royal Infirmary, Murphy had asserted that Labour was revealing more evidence of growing strain on resources. “Our NHS is too important to be silenced by SNP ministers embarrassed by politically inconvenient statistics,” he said.

When the gaffe became public today, Health Secretary Shona Robison MSP called for an immediate apology to NHS staff at the hospital.

“Jim Murphy has been caught red-handed fiddling the NHS figures – and he must withdraw these outrageous claims and issue an immediate and unequivocal apology to NHS staff and patients,” Robison said.

“There are undoubtedly pressures in our NHS, but the last thing staff and indeed patients need is to have politicians touring the country whipping up panic with false claims such as these.”

The Scottish Government announced that it would now publish weekly A&E statistics, in line with practice in England.

However, the FOI response provided to Labour made clear that over 200 of those 292 operations – over 70% – were cancelled for clinical reasons.

Meanwhile, the figure Labour used for England – which they themselves linked to in their original press release – makes clear that the 19,471 cancellations south of the border only included those for non-clinical reasons. Labour were not comparing like with like.

Medical reasons are outwith the remit of government or administrators in that they are the result of clinical decisions and are not resource-dependent. However, in an attempt to shift the embarrassment, a Labour spokesman insisted Scottish ministers were themselves responsible for the confusion for repeatedly refusing to regularly publish official data on cancelled operations, which could expose worsening performance.

The health service, although devolved, will play a key part in the General Election campaign and has been a target for Murphy’s criticism, as he attempts to run a UK general election campaign by challenging on issues managed by the Scottish Government. Today’s serious gaffe will undermine that strategy.

Derek Bateman has contributed a blog comment on the Labour / NHS scare affair.