A Labour peer has expressed his delight that nuclear weapons were invented and that Britain played a part in the process that led to their creation.

Speaking in the House of Lords last week, Lord Gilbert also said that nuclear weapons, deter people “with brown skins” and that a neutron bomb dropped on the Pakistan border might address problems with cross border infiltration to and from Afghanistan.

Speaking in a debate on ‘multilateral nuclear disarmament with China’, the Labour peer admitted he did not favour a nuclear free world, and said:

“I am absolutely delighted that nuclear weapons were invented when they were and I am delighted that, with our help, it was the Americans who invented them.”

Lord Gilbert listed conflicts he suggested WMDs had ensured had not happened again, and added: “To take another piece of evidence, let us look at relations between India and China.

“They fought several wars, and I was at the MoD when they both got nuclear weapons.  We were supposed to be scandalised about it, but I was delighted.

“That proved, and it seems to me to have done so since, that nuclear weapons are as much a deterrent to gentlemen with brown skins as they are to those of us with white skins.  I am glad that both of those countries have a nuclear capability.”

The Labour peer also suggested that by threatening to drop a neutron bomb at the border between Afghanistan and Pakistan the problem of cross border infiltration could be addressed.

He said: “Your Lordships may say that this is impractical, but nobody lives up in the mountains on the border between Afghanistan and Pakistan except for a few goats and a handful of people herding them.

“If you told them that some ERRB warheads were going to be dropped there and that it would be a very unpleasant place to go, they would not go there.  You would greatly reduce your problem of protecting those borders from infiltration from one side or another.”

Lord Gilbert’s comments are sure to raise concerns over their appropriateness, with many feeling that the suggestion about dropping a neutron bomb on the border between two nations completely unacceptable.

In 2009, prior to the Chilcott Inquiry that looked into Tony Blair’s role in the illegal invasion of Iraq, the outspoken peer told the BBC that in his opinion Iraq had been liberated and not invaded.

He said: “I far prefer that word [liberated] to ‘invade’, let us be quite clear what we did there we liberated them from a very foul dictatorship.” 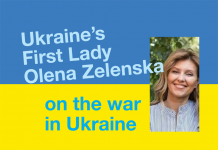 Olena Zelenska speaks out on war in Ukraine

Why change is needed for Scotland’s young people