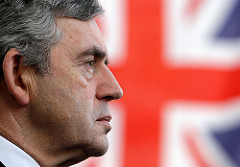 Scottish Labour will not back calls for a pro-EU Scotland to remain in the European Union if the rest of the United Kingdom votes to leave at the coming referendum.

Former Prime Minister Gordon Brown insisted that the forthcoming EU referendum was a vote for the whole of Great Britain and not for the four separate nations.

Mr Brown was launching Scottish Labour’s Pro-European Referendum campaign which will argue that the UK should remain in the European Union. However when asked if he would back calls from First Minister Nicola Sturgeon for a double-lock that would require all four nations to vote to leave, Mr Brown said:

“And the decision has to be, does Britain want to stay in Europe.”

Mr Brown’s comments came on the same day First Minister Nicola Sturgeon said it would be a “democratic disgrace” if Scotland voted to remain in the EU, but was then dragged out by the rest of the UK voting to leave.

“If Scotland was to vote to stay in the EU, but the vote across the UK was to lead to us being taken out, I think that would be a democratic outrage and I think it is a cause of real concern.”

Nicola Sturgeon has already called for a so-called ‘double-lock’ which would require all four nations of the UK to vote to leave the EU before the UK could give up its membership.  Her proposal received a more positive response from Welsh Labour leader Carwyn Jones, responding to a Plaid Cymru question.

On the day Gordon Brown launched his party’s campaign to remain in the EU, Nigel Griffiths who was the former Labour MP for Edinburgh South, launched Labour’s ‘Out’ campaign.  Griffiths was Deputy Leader of the Commons under Tony Blair.

Speaking at the launch of ‘Labour Leave’ in December, Griffiths said:

“As a former Minister in the last Labour government I know how much the EU interferes with the day to day of governing the country and delivering public services,”

“The cost of this interference is unacceptable, especially to small and medium sized businesses, and the lack of democratic accountability is something that should alarm every Labour member and supporter.  We need to safeguard our democracy by voting to leave the EU.”

Despite no firm date having yet been set for the EU referendum, the issue looks set to seep into the Holyrood election which is scheduled for May this year. The SNP is solidly in favour of remaining in the European Union and will look to capitalise on Labour splits.

First Minister Nicola Sturgeon has already listed a UK ‘Out’ vote as one of the ‘material changes’ that could lead to a second independence referendum.