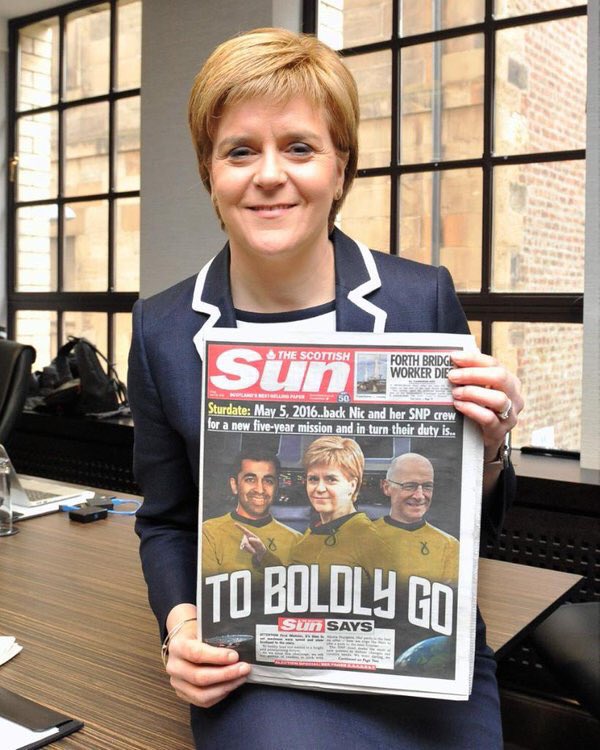 When I saw the picture of Nicola Sturgeon holding a copy of the Sun I dismissed it as a “photoshop”. After all the Sun does that all the time, indeed the front page she is holding is a photoshop of SNP leaders in Star Trek clothing.

Also I couldn’t believe that Nicola, the smartest politician in Britain,would make such a crass error like this in the week of the Hillsborough report.Remember how Ed Milliband had to apologise indeed grovel when he gave a similar endorsement to the Sun during the general election campaign.

So imagine my horror when it was confirmed to me that not only was the picture not photoshopped, but the SNP was confirming it was real, and that it was relaxed about it because after all the Sun was backing the party. Some SNP supporters are uneasily accepting this photographic endorsement because the Scottish Sun is supposedly a different newspaper to the English Sun.

I know it’s a slip edition, I know the Scottish political editor Andy Nicol is a nice guy. But, as I always reminded him, he had a choice about his employer. Ultimately it is the same paper as the English Sun that is a vile racist ,reactionary ,sexist and anti-trade Union rag. Yes the Sun in Scotland backed the SNP in 2011 and is backing them today but remember the Sun in Scotland didn’t come out for Yes in the referendum, despite some suggestion it might. The reason it didn’t is because Murdoch likes to back winners and he rightly concluded Yes weren’t going to win. He is backing the SNP in Scotland in this election because they are going to romp home.

That’s why Murdoch did a deal with Tony Blair back in 1994 when Blair flew round the world  to Australia to speak to Newscorp’s AGM. The Sun backed Labour in return for freedom for Murdoch to have his own way in newspapers and TV. That lasted till Murdoch thought that Labour were no longer winners and they were dumped for Murdoch’s more natural allies the Tories. The same happened in Australia, where Murdoch’s newspapers backed the Australian Labour Party as long as they were winners, but dumped them as soon as they faltered.

Of course getting the backing of Murdoch and the Sun doesn’t come cost free, there is a price and it’s called compliance, that is allowing Murdoch to pursue his corporate interests without too much interference from government or in some cases explicitly favouring Murdoch’s interest.

When I became an MEP in 1994 I joined the Culture Committee and met a former Labour MP Phillip Whitehead, he told me he had come to the European Parliament “to shaft Murdoch” I shook his hand and promised him my full support. Over the next five years we worked on various directives, notably Television Without Frontiers which prevented Murdoch and Berlusconi doing to European TV what he has done to British TV with Sky. That’s why Murdoch hates the EU because as he said: “When I go into Downing Street they do as I say; when I go to Europe they ignore me.”

Some SNP members are dancing on the head of a pin saying Nicola isn’t really endorsing the Sun by having her photo taken with it, and anyway a lot of people read it! Well I’m sorry, but if Nicola would like to distance herself from the Sun she has had several days to do it and the silence is striking. What the price of Murdoch’s support is in Scotland isn’t yet clear, but could involve some future light touch regulation of the media and TV in Scotland, lower tax levels for the rich and corporations )although since Newscorp has paid an average of only 3% in corporation tax they can’t be much lower!)

Other business friendly policies such as privatisation of CalMac or allowing fracking are possible. One thing for sure – there will be a price to pay.

What does this mean for many of the 116,000 SNP members? Firstly I suspect that figure is an exaggeration I know that in my branch many members who took out a £5 membership in sympathy after the referendum haven’t renewed their membership, but this has not yet been revealed by SNP HQ.

Secondly, I believe that many of the new members who were previously Labour voters are to the left of the leadership of the SNP over issues such as NATO, fracking and land reform. We saw this at recent conferences where the platform was defeated on land reform, and almost on fracking despite control-freak machinations worthy of New Labour by the party apparatchiks. Malcolm Kerr made a brilliant speech at the last conference about his concern for democracy in the SNP. He has set up a Facebook group and plans a full discussion after the election and an attempt to democratise the SNP. I wish him well but I suspect the party machine has too much control.

I joined the SNP over four years ago, as I thought I could help to shape the debate in Scotland and help to move towards an independent socialist republic which has always been my politics, whatever my party. I have been a conference delegate, a National Council member, a member of the Trade Union Group Executive Committee, and almost became the SNP MP for Kilmarnock.

I have now retired from active politics and trade unionism after over 50 years of activism, including being a tenants’ leader, a trade union official, a Councillor, MEP, press officer and journalist. In my last article for Newsnet Scotland I explained how I was voting SNP in my constituency but Green on the list, as the SNP wouldn’t win any list seats in Edinburgh, and anyway I would like to see Andy Wightman in the Parliament. I would appeal to all SNP supporters in Glasgow and Edinburgh to do the same on Thursday.

I expected some response from the SNP on this but they have wisely decided not to draw attention to me by disciplining me. I have a tradition of being expelled from parties but this time I am resigning. I cannot belong to a party which gives support however loosely to the Murdoch empire. I am sad about this, I was warmly welcomed into the SNP by most people and have many good friends in the party. I also think the SNP government have done a good job over the past nine years in government, given the constraints on resources.

In Alex Salmond and Nicola Sturgeon we have had the two smartest politicians in Britain. However there is a real danger of institutionalisation taking place in the SNP today, that is power for the sake of government, not for the sake of change and independence.

Also as in any successful movement there are people who seem more focussed on jobs, money and status rather than political change. As one older SNP member said to me: “The SNP used to be a cause, now it seems to be a career.”

Well my political career is over as is my membership of the SNP, as of today I am resigning from the party.

Hugh Kerr was an SNP member for 4 years. Previously he was a Labour and Green MEP. 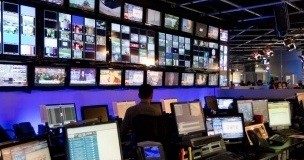